The title of this article is ambiguous. For the journal, see Südosteuropa (journal) . 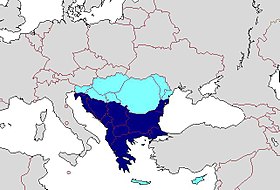 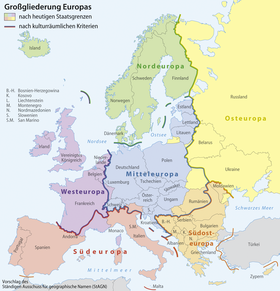 Southeast Europe refers to the countries in southeast Europe , although the delimitation varies depending on the context. The term Balkans or Balkan Peninsula is often used synonymously, but the respective area is not congruent.

For the controversial term Southeastern Europe, a topographical classification is mostly used in geographic and historical research, which assigns the term to the states of the Balkan Peninsula plus the Pannonian Basin and the Transcarpathian region between the Lower Danube and Dniester . Southeast Europe in the broader geographical and political sense includes the following countries:

Sometimes Cyprus , the de facto independent area of ​​the Turkish Republic of Northern Cyprus and Turkey (states that actually belong to Asia ), as well as Budschak ( Ukraine ) are counted as part of Southeastern Europe. In total, it is about an area of ​​over 960,000 km² with around 90 million inhabitants.

History of the designation

The term Southeast Europe, introduced by the Albania researcher Johann Georg von Hahn (1811–1869), was temporarily used as an alternative to the (narrower) Balkan term. In German-language (and parts of foreign) research, however, the broader term Southeast Europe became established in the course of the 20th century. Similar to the Balkans, the demarcation of south-east Europe in the north-west and east- central Europe (another controversial term) is problematic. There are no clear and universally accepted geographical or historical dividing lines. Under these circumstances, Southeastern Europe must be understood as a working term that must be modified according to the respective subject and period of study.

The term Southeastern Europe gained in importance , especially during the Nazi era. It was introduced in the interwar period by proponents of German Ostforschung and geopolitics as an alternative to the Balkans , which from the perspective of German foreign policy had negative and undesirable connotations. For example, Franz von Papen warned in his memoirs against a “Balkanization of Central Europe”. While the Balkans stood for an oriental past, disorganization, political instability and a "tangle of peoples", Southeastern Europe, on the other hand, symbolized a "progressive" order under German hegemony that contributed to the "civilization" and "Europeanization" of the region.

In the 1934 essay The Southeast Area in the Concept of Central Europe (ZfG, Heft 3, 1934, pp. 162–164), Rupert von Schumacher tries to delimit Southeast Europe from “Central Europe”, another geopolitical battle term that was used for the successor states of the Habsburgs. Monarchy was used. Von Schumacher regarded “space” as the only stable factor in the Balkans and pointed out the “dual character” of Croats and Hungarians . The Balkan peoples should be seen as "biologically and politically unreliable factors".

According to this worldview, the “supplementary region of Southeast Europe” should be integrated as a supplier of raw materials and labor and as a buyer of German industrial products into a German-dominated “Greater Europe” region. In 1940 the German press announced that “the Balkans were dead” and “Southeast Europe was born” (Daily Mail, November 2, 1940).

In order to influence and exploit the Balkan states, the Southeast Europe Society (SOEG) was founded in Vienna in 1940 by the Nazi bureaucracy . It competed with the Central European Economic Day (MWT), an association supported by major German banks and companies that wanted to use economic means to establish a long-term dependence of Southeastern Europe on Germany.

In the early 1940s, difficulties in delimiting the term became apparent:

Despite efforts to the contrary to standardize the term, Ronneberger came to the conclusion in 1943 that Southeastern Europe was a German “definition of the political for our purpose”. Since one is not dealing with a “pure” and objective science, such as mathematics or the natural sciences, but with an extremely political branch of science, the assignment of a people to a certain cultural and economic “circle of power” is involved linked to a political decision.

In overlap with the terms “the Balkans” and “Southeastern Europe”, the terms “Eastern Europe” or “East-Central Europe” are used in Anglo-Saxon literature to denote the states that were socialist and dependent on the Soviet Union until the end of 1989 .

By Christian Giordano and other scientists one of the six is the historical regions of Europe "South Eastern Europe" called. This metropolitan area was significantly shaped by the Byzantine and later the Ottoman Empire . The Ottoman feudal land division system ( Tımar ) and the frequently practiced subsistence economy prevented the connection to the economic development of northwestern Europe for centuries.

In German history, Southeast Europe is treated as one of the three historical subregions of Eastern Europe alongside East Central Europe and the East Slavic settlement area (with a focus on Russia ) . The difficulties in the geographical and historical definition of the term result from the fact that Southeast Europe - despite its geographical differentiation in the interior - is open to traffic on the periphery and forms the most important link between Central Europe and the Middle East . For thousands of years it has acted as a transit area and bridge between two continents. "Southeast Europe and Asia Minor together form a kind of cultural bridge of eminent importance since the emergence of the oldest high cultures" ( Valjavec ).

In contrast to the two other historical subregions of Eastern Europe, Southeastern Europe has ancient cultural foundations which, however, were largely displaced, reshaped and reshaped in the course of the Middle Ages and modern times by new immigrants and the formation of great powers. With the Slavic conquest of the Byzantine empire at the end of the 6th century, the ethnic structures of the area have been fundamentally changed and have not come to rest for more than a millennium. The remnants of the pre-Slavic population in southeastern Europe ( Greeks , Albanians and Romanians , or their ancestors) lived at times widely scattered and were on the defensive against the Slavs . With the penetration of more equestrian nomads and with the Hungarian conquest at the end of the 9th century, the ethnographic map of the region was redesigned again. 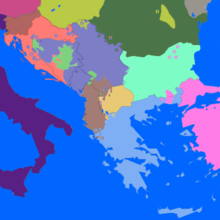 In the middle of the 14th century the Ottoman Empire expanded from Asia Minor . Two centuries later, the Habsburg monarchy invaded the area in the opposite direction. Both processes have favored ethnic instability (migrations). “National” autochthonism and ethnic continuity, which have been elevated to the highest credo since the nation was formed, mostly turn out to be pure fictions.

Today at least twelve “state-bearing” nations live in Southeastern Europe: Albanians , Bosniaks , Bulgarians , Greeks , Croats , Magyars , Macedonians , Montenegrins , Romanians , Serbs , Slovenes and Turks , plus possibly the Moldovans , who fluctuate between their own nation and belonging to Romania. Most of the “state peoples” also form national minorities outside their state territory. In addition, there are a number of other ethnic groups that do not have a state of their own within the region. Most nations claim an independent written language, although the differences between the individual standard languages ​​are sometimes small.

Confessionally, Southeast Europe is divided into a Christian (in the west and north Roman Catholic , otherwise Orthodox ) and an Islamic sub-area.

Cut off from the rest of Europe

For almost half a millennium, a large part of Southeast Europe was cut off from developments in Western Europe. Depending on the geographical location, the individual sub-regions were under direct or (as in the case of Transylvania and the principalities of Wallachia and Moldova ) under direct Ottoman rule for one and a half to five centuries . During this long period, the late medieval Byzantine Orthodox culture of the Balkans was preserved or, in some places (especially in the Albanian settlement area, in Bosnia-Herzegovina and southwestern Bulgaria) Islamically reshaped. These old Balkan, patriarchal zones with their Islamized sub-regions differ not only sharply from the Eastern Alpine cultural zone with its Central European character, but also from the Pannonian cultural zone and the Adriatic coastal zone with their Romanesque-Slavic cultural symbiosis.

The beginnings of today's states go back to the 19th century, when the internal and external collapse of power of the Ottoman Empire entered the final phase. As a result of uprisings, wars and interventions by the rival European great powers, the Ottoman domination in Europe was gradually pushed back.

When the Austro-Hungarian multi-ethnic state also disintegrated towards the end of the First World War , the way was clear for a fundamental redesign of the political map of Southeast Europe. The political ruling classes in the region all came up with maximum territorial demands that mutually overlapped and were "legitimized" partly with ethnic, partly historical, and from case to case also with economic and strategic arguments. A demarcation that would have complied with the principles of the “ right of the peoples to self-determination ” was neither possible (at least not on the basis of the territorial principle) in view of the numerous ethnic mix-ups, nor was it sought.

Serbia , Romania and Greece in particular emerged stronger from the Balkan Wars and the First World War .

The result of the political reorganization was the emergence of two heterogeneous large states ( Yugoslavia and Romania ), a persistent political division in the Danube-Balkan area and the continued existence of numerous foreign and domestic political hot spots, which made it extremely difficult to stabilize and consolidate the young states. The political turmoil in Southeast Europe made it easier to establish first National Socialist and then Soviet hegemony in large parts of the region.

The roughly four decades of division of south-eastern Europe into a western (Greece, Turkey) and a socialist sub-area (Yugoslavia, Romania, Bulgaria and Albania with different models of socialism) has, of course, shaped the region as a whole much less than the historical structures that have grown over centuries. The latter were politically effective instrumentalized in the early 1990s when Yugoslavia collapsed - and with it that state that reflected the diversity of Southeast Europe in an exemplary manner. (See also Yugoslav Wars )

Whoever tried to formulate the unifying and special features of Southeastern Europe as a historical region, referred in the first place to the diversity in the unity or to the fact that "precisely the plurality typical of Southeastern Europe in terms of the regional bracing, the linguistic and ethnic diversification, of the cultural and social wealth of forms has modeled an unmistakable south-east European physiognomy ”( Bernath ).

A constitutive element of the regional understanding is thus the mutually overlapping and pervasive diversity with ethnically and culturally "flowing" border areas, the existence of which is often a thorn in the side of nationalists.