This article covers an area in Bessarabia, for more meanings see Bucak . 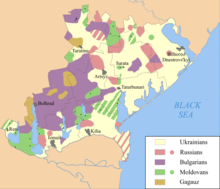 The southern part of the historical landscape of Bessarabia is referred to as Budschak ( Russian and Ukrainian Буджак , scientific transliteration Budžak , Romanian Bugeac , Tatar or Turkish Bucak ) . Today, the region is largely on the territory of Ukraine (southwestern part of Odessa Oblast ), a smaller part is in the south of the Republic of Moldova .

The name Budschak comes from Tatar or Turkish and means angle or triangle . The cities of Bender , Akkerman ( Bilhorod-Dnistrowskyj ) and Ismajil mark the respective corner points.

Herd of cattle with shepherd in the Budschak steppe (1940)

The landscape consists largely of a wide, slightly hilly steppe landscape with very fertile soils, the so-called black earth . The settling colonists made the land arable and thus had a certain exemplary character for the then backward Russian agriculture. They mainly grew grain, oil and legumes for export to Odessa and western European cities. In the course of time the Budschak developed into a kind of granary for the country.

Before Bessarabia became part of the Russian Empire after the Peace of Bucharest as a result of the 6th Russian Turkish War in 1812 , the population consisted mainly of Nogai Tatars , Turks and Romanians ( Moldovans ), plus Lipovans who had settled in the 18th century . After 1812 all Tatars and Turks as well as large parts of the Romanians and Lipovans left the region. In order to repopulate the area, the Russian government recruited Bulgarian , Gagauz , German , Ukrainian and Russian (but not Lipovan!) Colonists and provided them with soils and privileges (freedom of religion, exemption from military service) (see: Population of Bessarabia ).

From 1814 to 1842 about 9,000 Germans, mainly from Württemberg and Prussian Poland , immigrated to Bessarabia , from which the ethnic group of the Bessarabian Germans formed over time . They founded 24 mother colonies on the crown land allocated by the government . The crown land in the Budschak steppe covered about 150,000 hectares, where the main settlement area of ​​the German emigrants was. But German emigrants also settled in northern Bessarabia outside the Budschak. In September 1940, the German-Soviet border and friendship treaty between the German Reich and the Soviet Union enabled the resettlement of the now 93,000 German-born residents of Bessarabia from around 150 settlements. Almost all members of the ethnic group, including the parents of the future Federal President Horst Köhler , who came from northern Bessarabia , joined the resettlement, which was completed in November 1940.

Budschak as a region of Bessarabia

Originally, the area was owned by the Principality of Moldova from 1367 to 1484 , which was a protectorate of Poland at that time , but fell under the sovereignty of the Ottoman Empire in 1512 . The Budschak region itself was conquered by the Ottomans in 1484 and incorporated directly into their empire. It became the region of today's Ukraine that was under Turkish rule for the longest time (see Islam in Romania and Islam in Ukraine ) . In the region, many place, river and lake names are reminiscent of the Turkish-Tatar past: Tatarbunary, Alibej, Izmail etc.

In the Treaty of Bucharest in 1812, Russia was granted the right to take possession of all of Bessarabia. Even Peter the Great had before, and in another one hundred years Turkish wars aimed at this goal, but had been initially mastered the Prut. After the Crimean War , the southern half of the Budschak (as part of Cahul, Bolgrad and Ismail ) belonged to the Principality of Moldova and Romania between 1856 and 1878 .

In the revolutionary turmoil of 1917, Russia was lost. In 1917 a regional council declared Bessarabia and with it the Budschak to be the Democratic Republic of Moldova . After internal unrest with marauding gangs, the Provincial Council of Romania called for help in 1918 and sent troops. In the same year the voluntary connection to Romania took place. The western powers recognized the connection with Romania. From the Soviet point of view, it was a secession from Russia staged by the Romanian government and an organized annexation by Romania.

In 1940 the Soviet Union took possession of the country again through military occupation and divided Bessarabia for the first time. The northern and central part formed the Moldavian , the southern part (Budschak) came to the Ukrainian Soviet Socialist Republic . During the Eastern campaign of the German Wehrmacht ( Operation Barbarossa ), which began on June 21, 1941, Bessarabia was conquered by German and Romanian troops in August 1941. During Operation Jassy-Kishinev's summer offensive on August 20, 1944, the Red Army overran Bessarabia in five days. After the war, the region was divided again. The Budjak was incorporated into the Ukrainian SSR, making the Moldovan SSR a landlocked country, which had a negative impact on its economic development.

When the Soviet Union collapsed in 1991 and Ukraine gained independence, the Budschak remained part of the now independent state of Ukraine.