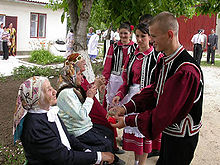 The Gagauz [ gagauːzən ] ( Gagauz Gagauz , . Pl Gagauzlar ; Russian гагаузы gagausy ) are a Turkic people , which mainly in the autonomous region of Gagauzia in today's Republic of Moldova lives. Worldwide there are, depending on the estimate, between 200,000 and 230,000 members of this people. Around 150,000 of them live in the Republic of Moldova (almost 128,000 of them in Gagauzia), around 32,000 in Ukraine and around 14,000 in Russia . In addition, there are a few thousand Gagauz in other successor states of the Soviet Union as well as in Turkey , Romania and Greece .

The majority of the Gagauz are Christian Orthodox and belong to the south-western or Oghusian group of the Turkic peoples. They speak the Gagauz language , a language variety of Anatolian Turkish . Gagauz is written in both the Cyrillic and Latin alphabet . In Gagauzia, a Latin alphabet based on Turkish has been gaining acceptance since the mid-1990s. Gagauz has been listed as an endangered language by UNESCO since 2012 , although this assessment has been rejected by the Gagauz government. Almost all of the Gagauz also speak Russian .

Flag of the Gagauz

The ethnic roots of the Gagauz have not yet been fully clarified. There are four hypotheses about the development of the Gagauz people :

The Karwuna Land (today: Dobrudscha ) region was populated in the first half of the 13th century by Turkish Oğuz tribes who immigrated after the collapse of the Turk Empire. Under the later rule of Keykavus over the Karwuna land, many Anatolian Muslim Oğuz, i.e. Turkmen, were also to immigrate.

The Oğuz tribes in the Karwuna land endangered the security of the Byzantine Empire with their raids and raids . To put an end to this problem, Byzantium sought to win over the Oğuz tribes as loyal forces. As a result, Byzantium recruited its troops from the Oghuz population of the Karwuna country.

In 1261 the Seljuk Sultan İzzeddin Keykavus appeared at the court of the Byzantine Emperor Michael VIII. Palaiologos with numerous Oghusian / Turkmen Oba ( Oghusian for community / clan) . The Sultan was on the run from the Mongolian Ilkhan who threatened Anatolia. Anatolia had since the Battle of Köse Dağ , divided into two areas of power, in which the Turks were inferior to the Mongols: In Eastern Anatolia there was still the Sultanate of Rum as vassals of Ilchane, originated in western Anatolia gradually autonomous principalities ( Beyliks ) which were formally subordinate to the Sultanate. Sultan Keykavus and his followers fled first to the Turkmen in the west and from there to the Byzantine capital . Numerous Turkmen clans joined the Sultan on the way, up to 40 of them on Byzantine territory.

The Byzantine emperor Michael Palaiologos enfeoffed Keykavus with the region of today's Dobruja. Keykavus established an Oghusian state (a Beylik) in Dobruja with Karwuna (later renamed from Beylik or Balık in Balchik ) as the capital. The ethnonym Gagavuz probably goes back to the attachment of the Turkmen group to Keykavus, so that Keykavus / Gagavuz established itself as an ethnonym. However, Keykavus had already left Dobruja in 1265 for the Crimea.

Despite the Islamic creed of the Seljuk Turks, Greek Orthodoxy was recognized as the dominant religion. The Gagauz were subordinate to the Patriarchate in Constantinople through an exarch in Karwuna .

Strengthened by the immigration of Seljuk Turks, the newly founded state set up its own army and fleet. As a result of clashes between the tribes, the Bulgarian Balık became the leader of all Oğuz tribes and head of the Dobruja despotate . In 1346 Balık sent 1000 horsemen to Constantinople to support the regent Anna of Savoy .

After Balık's death, his brother Dobrotič ascended the throne in 1357 . During his reign the empire stabilized and the fleet increased. Dobrotič changed the state name from Karwuna Land to "Land of Dobrotič", from which the current name for the Dobruja region later developed. Dobrotič was succeeded by his son Yanko (Ivanko according to other sources) in 1386 . Yanko was the last independent Oghuz ruler over the Dobruja.

In 1398, Yanko was forced to recognize Ottoman supremacy . After the loss of independence, parts of the population converted to Islam . After the conquest of Constantinople , the Ottoman Sultan Mehmed the Conqueror recognized the Greek Patriarchate of Constantinople as the head of all Christians in the empire . There are not many references to the Gagauz in historical sources for the near future. One of the references is from 1652; there the patriarch decreed that authority over all villages and towns should no longer be given to the exarch of Karvyna , but to the local bishop .

Between the years 1750 and 1846, waves of migration from the Gagauz (and Bulgarians) began via Ottoman Bulgaria to Russia . The trigger of these migrations was apparently the looting of the gangs ( Daġlı  /داغلىand Ḳırcalı  /قرجالى) by Osman Pazvantoğlu , the Pasha of Vidin  /ودينand from Ḳara Feyżī  /قارا فيضى. The first migrations up to 1769 led mostly to the province of New Russia . Migrations between 1787 and 1791 and especially the migrations between 1801 and 1812 led to Bessarabia . These immigrations were not hindered by the Russian government; the government remained rather indifferent. Only later did the government take care of order and administration.

During the Russian Revolution 1905–1907 there was a peasant uprising in the Gagauz settlement area, which culminated in the proclamation of a Komrat republic in January 1906. After five days these independence or autonomy efforts were suppressed by the tsarist authorities.

During the Second World War, a great number of Gagauz were deported from the region and lost their lives. After the establishment of the Moldovan Soviet Socialist Republic , 80% of the Gagauz lived in this area, 20% lived in Bulgaria and the Ukraine . 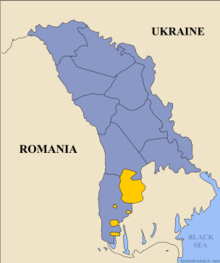 Gagauz autonomy within Moldova (yellow) since 1994

After the Soviet Union was on the verge of collapse, nationalist and anti-minority tendencies rose sharply in Moldova. In 1990 Gagauzia split off from Moldova under the leadership of Stefan Topal and initially tried to be recognized as an independent republic within the Soviet Union. After the final collapse of the Soviet Union, Gagauzia was completely detached from Moldova as a de facto independent state for a few years, and the city of Comrat became the Gagauz capital.

From 1994 there were negotiations about a return of Gagauzia to Moldova. On April 23, 1994, the Moldovan parliament passed a constitutional amendment, which provided for extensive autonomy rights for Gagauzia, including its own government and Gagauz and Russian as regional official languages. At the end of 1994, Gagauzia agreed to peaceful reunification with Moldova. Since then, the Moldovan-Gagauz conflict has been resolved, even if tensions between the regional government in Comrat and the central government of Moldova increased again from 2014 onwards.

In the Gagauz village of Beşalma ("Five Apples") is the National Museum of Gagauz History and Ethnography, which was founded by Dimitri Karaçoban . There are good connections between Gagauzia and Turkey.

The majority of the Gagauz profess Orthodox Christianity . A small minority profess Islam .

Settlement areas of the Gagauz in the Ukrainian Oblast of Odessa

In addition to Gagauz, most of the nationals also speak Russian and Romanian . Gagauz is very closely related to Ottoman Turkish , so Turkologists have identified Gagauz as a Turkish dialect.

For a long time the Gagauz did not have their own literature. At that time, when the Gagauz did not have their own written language, the Greek Orthodox Church resorted to the books of the Turkish-speaking Karamanlı . These are church books written in the Turkish language using the Greek alphabet . Written Gagauz literature began in the 20th century. In 1904 Moškov wrote a pamphlet on Gagauz proverbs and songs for Wilhelm Radloff's collection of folk literature from the Turkish tribes . The Gagauz priest Ciachir then published a dictionary and translations of religious texts such as the Bible , Orthodox liturgy and legends of saints. As authors of primers, reading and grammar books, Ä. Toucan, Ivan Čakir, Nikolaj Tanasoglu emerged. Other important Gagauz poets are Dionis Tanasoglu, Ilja Kalpakči, Nikolaj Arabadži, Fedor Angeli, Nikolaj Tufar. In 1959 the anthology Budžaktan seslär ("Voices from Budžak") was published. Stories, poems and essays could be published as Gagauz supplements in Moldovan newspapers.

A written Gagauz language was not codified until 1957 . The Presidium of the Supreme Soviet of the Moldovan SSR established rules of Gagauz grammar in 1957. The Russian alphabet was introduced as the written language with a few additional letters specially developed for Gagauz. In the following year, 1958, school instruction was introduced in the Gagauz language.

In 1964 a grammar of Gagauz in Russian was published by Lyudmila Pokrovskaya , and in 1973 the Academy of Sciences in the Moldovan SSR published the first Gagauz-Russian-Moldovan dictionary with 11,500 words.

The writers Nicolai Baboglu and Todur Zanet , the clergyman Mihail Çakir and the politicians Mihail Formuzal and Stepan Topal , among others, have known or professed their Gagauz nationality .