Sultanate of the Rum Seljuks 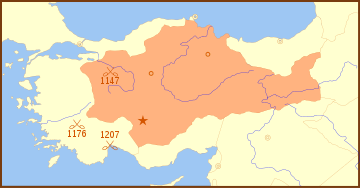 The Sultanate of the Rum Seljuks around 1190. The star marks the capital Konya (Greek Ikónion).

The Sultanate of the Rum Seljuks or Sultanate of Iconion (also called Sultanate of Rum , Arabic السلاجقة الروم, DMG as-Salāǧiqa ar-Rūm , Persian سلجوقیان روم, DMG Salǧūqiyān-i Rūm , Turkish Anadolu Selçuklu Devleti , 'Anatolian-Seljuk State' ) was the rulership established on conquered Byzantine territory in Anatolia of the Oghuz-Turkish Rum-Seljuks, who die - just like the Kerman.-Seldschuks (1048) Seljuks of Syria (1078) - made independent from the Great Seljuks empire in 1077 and then ruled over a significant empire centered on Konya . After the battle of the Köse Dağ (1243), the sultanate became dependent on the empire of the Mongolian Ilkhan and dissolved until 1307 "without a song". 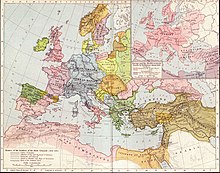 Conquest of the Seljuks

After the defeat against the Seljuks in the Battle of Mantzikert in 1071, the interior of Asia Minor was finally lost to the Byzantine Empire . Oghusian-Turkish tribes who immigrated to Anatolia in the wake of the Seljuks founded several principalities , including the Saltukids , whose rule lasted until 1202. Suleiman , a son of the renegade Seljuq prince Qutalmish , who had also come to Anatolia with his followers, was appointed governor of the north-western provinces of the Seljuk Empire by Sultan Malik Shah I in 1074 . In this capacity he conquered the Byzantine cities of Nikäa (İznik) and Nicomedia ( İzmit ) in 1075 . In 1077 Suleiman rebelled against Malik Shah and proclaimed himself "Sultan of Rum". In 1078 he made Nicaea his capital. 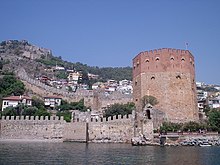 In 1084 Sultan Malik Shah I captured Antioch (Antakya), which was held by Philaretos Brachamios at the time, in a surprise attack with the help of Suleiman . The residents fled to the citadel. When Suleiman committed suicide ( Anna Komnena ) or was killed on the orders of Tutush in Antioch in 1086 after a defeat against Tutush I , the Seljuk Sultan of Aleppo , the dynasty fell into a serious crisis: Suleiman's son Kılıç Arslan was held hostage at the Great Seljuk court and was only released again after the death of Malik-Shah I (1092).

Kılıç Arslan I was able to take back large parts of the lost territory. Following a loss to the Crusaders of the First Crusade at Nicaea and Dorylaeum (Dorylaion) in 1097, however, the Byzantines pushed him back to Anatolia. In the following years he was able to consolidate his power again. In 1101 he triumphed over the crusade participants , conquered Iconium (Konya) and made it the center of his empire. In 1107 he conquered Mosul , but fell in the same year in the battle against Muhammad I. Tapar , the son of Malik-Shah I.

The sultanate was in constant conflict with the Byzantine Empire, but was also a buffer state between Byzantium and the Muslim world. There were no significant shifts in the border with Byzantium. Between 1097 and 1176 the Sultanate was also in constant conflict with the Danishmends until the Seljuks finally defeated them and incorporated their territory into their empire. Iconium was exiled for some Byzantine renegades, and in some cases alliances with the Kingdom of Lesser Armenia and the Crusader states were formed .

The up-and-coming Ottomans from the northwestern Anatolian principality of Osman Bey took over the inheritance of the Seljuks in Anatolia at the beginning of the 14th century and in 1386 conquered Konya, which had become the capital of the Karaman- Beyliks. In 1402 after the battle of Ankara the Ottomans lost Konya again, the beylik of the Karamanoğulları was restored again by Timur Lenk , but in 1466 Konya finally fell to the Ottoman Empire .

In the feudal Iqta system, the local peasants became subjects of the Seljuk emirs, who gave the land to their followers and soldiers. The owner of an Iqta received the dues of his fief, but could not bequeath it. In the 14th century, the Iqta system was replaced by land grants to soldiers that were tax-free.

The urban upper class now also consisted of Seljuks. The non-taxable Turkomans and Arabs served in the army , later also captured Christians and Georgian and Frankish mercenaries. The nomads were used at the borders to fight the "infidels", but there were also constant attempts to force them to settle and to push them back into the barren mountainous areas, a policy that continued or largely ended in the Ottoman and Turkish times came.

Family tree of the Rum Seljuks