Flag of the Ilkhan

The Ilchane or Il-Chane (also Ilkhane , Persian ایلخانان Ilchaniyan , DMG Īlḫāniyān , [the Great Khan subordinate] part of rulers, "provincial princes") were a Mongolian , in the late 13th century to Islam had converted dynasty , which from 1256 to 1335 ruled over an empire that at times throughout Persia , Mesopotamia and large parts of Central Asia and Anatolia included. The Ilchanat with the capital Tabriz was founded by the general Hülegü , a grandson of Genghis Khan .

Already since the conquest of the Khorezm Shah's empire by Genghis Khan around 1220, practically all of Khorasan and northern Iran have been under the rule of the Mongols. After 1241, they began to establish themselves in Azerbaijan under Baidschu and also to conquer western Iran. After the victory over the Rum Seljuks in the Battle of the Köse Dağ / Sivas, there was no longer any significant resistance to this. 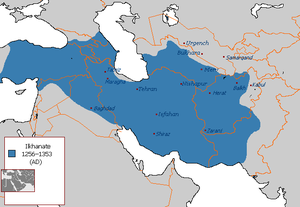 The realm of the Ilkhan in its greatest territorial extent including vassal states , 1256–1353

The rule of the Mongols in Persia was only combined in one empire in 1256, when Hülegü (r. 1256–65) founded the Ilkhan dynasty. Most of Persia was subdued without major battles, as most of the princes, especially in southern Persia, recognized the suzerainty of the Ilkhan. Baghdad , however, was forcibly brought under their rule by the Mongols after a brief siege in 1258 , after Caliph al-Mustasim refused to submit. Thus eventually also ended the Caliphate of the Abbasids in Baghdad.
Syria , however, could not be conquered due to a defeat against the Mamluks of Egypt in the battle of ʿAin Jālūt (1260), so that the Euphrates from then on formed the border to the Mamluk Sultanate - which will continue to be successful in the future - and the Ilkhanate had reached its greatest extent.
In addition to the failed attempts to conquer Syria, the Ilkhans had to deal primarily with the Golden Horde in the southern Russian steppe. This claimed the rule over the Caucasus and Azerbaijan, as it had held suzerainty over the Mongols operating there until 1256. The conflict was exacerbated by the fact that the Golden Horde allied with the Mamluks of Egypt. There were also several disputes with the Chagatai-Khans in Transoxania , but the Ilkhans were able to successfully defend both the Caucasus regions and Khorasan against foreign claims until their demise.

The dynasty's first internal crisis occurred under Ilchan Tegüder (r. 1282–84), who was the first Mongol ruler to convert to Islam and to take the name Ahmad. This led to resistance from the Mongolian upper class, who continued to adhere to the traditional tribal religion. In 1284, Ahmad Tegüder was overthrown by Arghun (r. 1284-91), under which an increased promotion of Buddhism took place. The neglect of the administration and the tax system that began under Arghun was only stopped under Ghazan (r. 1295–1304); this initiated a successful reorganization of the state. His reign is seen as the height of the dynasty. Under him, the Mongolian upper class converted to Sunni Islam and Jews , Christians and Buddhists were pushed back in the administration.

Ghazan's successors again neglected the administration of the empire. When Abu Said (ruled 1316–35) came to power as a minor, internal power struggles intensified. Nevertheless, the sovereignty over Anatolia was still maintained and the Caucasus and Khorasan were successfully defended. Only after Abu Said's death did the empire collapse in Persia. In the years that followed, some princes rose to become Ilchans, but at best they still ruled the capital of Tabriz. The provinces, on the other hand, became independent under their own dynasties, the most important of which were the Chobanids (in Persian Iraq and Azerbaijan), the Jalairids (in Arab Iraq), the Kartids (in eastern Khorasan), the Muzaffarids (in southern Persia) and the Sarbadars ( in western Khorasan) were.

Today's Hazara in Afghanistan are the direct descendants of the Ilkhan and their followers.

Economic and cultural developments among the Ilkhan people

In economic terms, the rule of the Ilkhan led to a boom in the country, as trade as well as industry and handicrafts experienced a significant boom thanks to the securing of trade routes to Central Asia and the Far East. However, this did not refer to agriculture, the further decline of which the Ilkhan could not stop. The reason for this was not only the destruction caused by the war (especially in northern Persia) but also the increased immigration of nomads, who were difficult to integrate into Persian society and the economy of the settled peasant population.

As a result of the support from the Ilchane, there was again a cultural upswing, with Tabriz in particular developing into an important cultural center as the capital of the empire: There was a rapid development especially in architecture and book illumination, the latter being particularly noteworthy because Islam actually forbids pictorial representation. Science was also strongly promoted. For example, the “Dar al-Shifa” academy was founded in Tabriz, at which 7,000 students were trained at times. In addition, such important scholars as the vizier Rashid ad-Din worked among the Ilkhan people .

The title Ilkhan was taken up again in the 19th century by the leader of the Kashgai in southern Iran. Dschan Mohammad Khan had the title since 1818/19 like all other leaders of the Kashgai Federation after him. The last Ilkhan was Nasir Khan, who was forced into exile by the government of Shah Mohammad Reza Pahlavi in 1954 and never returned to his old role after his return in 1979. After his death in 1984 there is no longer any holder of this title.