Mongol is a redirect to this article. Further meanings are listed under Mongolian (disambiguation) . 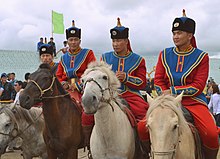 Mongols ( Mongolian script : mongɣol ; Cyrillic : монгол / mongol ) are in the narrower sense the ethnic groups that descended from the northeast Asian Mongolian tribes of the 13th century . In a broader sense, other Mongolian-speaking peoples such as the Dongxiang can also be counted among the Mongols.

The name Mongɣol was first applied to one of several smaller tribes in the area of ​​what is now Mongolia - in the area of Onon  ; under Genghis Khan in the 13th century, the name became an overarching popular name. 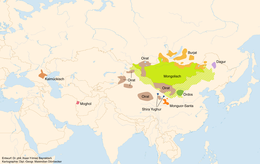 In total there are over 11 million Mongolians, most of whom now live in the People's Republic of China , followed by Mongolia , Russia and some Central Asian states.

The Kalmyks are the only Mongolian people to live in an autonomous Russian republic within Europe. Other scattered peoples living and speaking Mongolian languages ​​are z. B. the Bonan , Dongxiang , Monguor , Daur and parts of the Yugur in the People's Republic of China. The Moghol language in Afghanistan is or was a Mongolian language.

3.2 million Mongolians live in Mongolia, which corresponds to 96% of the population (as of 2013).

Buryat shamans consecrate an obo , a ceremonial pile of stones from Mongolian Tengrism

The Kalmyks are the only Buddhist Mongolian-speaking people within the geographical borders of Europe. Most of them live in Kalmykia on the Volga . They include 183,372 people (2010 census).

The Buryats live mainly in Buryatia , in southern Siberia , on the border with Mongolia. They include 423,436 people (1989 census). Only a few speak Mongolian left.

Old and new town of Korla , the capital of Bayingolin , 2007

In addition to the Inner Mongolia Autonomous Region at the provincial level, there are other Mongolian autonomous administrative divisions in China. 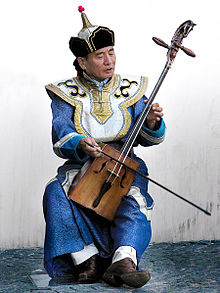 The original religion of the Mongols consists of several shamanistic traditions, which later also developed into Tengrism . In contrast to Turkish Tengrism, the Mongolian form is polytheistic , which means that several gods and spirits are worshiped. It is believed that Turkish Tengrism was influenced by monotheistic ideas, as the Siberian Yakuts are also polytheistic. As in all other Astasian, Siberian and Polynesian religions, ancestor cult plays a large and central role and is still an integral part of Mongolian culture today.

Today Buddhism is also widespread among the Mongols. It has largely mixed with shamanism and forms a religion that is difficult to separate. This is similar to Japan , where Shinto and Buddhism coexist.

The family plays an important and central role for the Mongols. Honest behavior and solidarity is an important point in Mongolian culture. Consanguinity is considered to be one of the strongest ties. Even today, many Mongolians are proud of their clan, which they can often trace back far into the past.

Armor of a Mongolian warrior during the Yuan Dynasty
→ Main articles : History of Mongolia  and Mongol Empire

The history of the Mongols goes back a long way, including the Xiongnu , the Xianbei and other steppe nomads, but also the settled peoples of the Kitan and other Mongolian tribes in Manchuria and China . Some ancient Mongolian -ruled states were the Xianbei, Rouran , Liao Dynasty , Wuhuan , Tuoba, and some Chinese dynasties.

With the Mongol Empire, the Mongols had the most powerful and largest empire on earth and thus influenced the future of many people, even in distant non-Mongolian territory. Furthermore, the Yuan Dynasty and several subsequent empires (such as the Djungarian Khanate ) were of Mongolian origin. Many historians also suspect that the Avars in Europe were of Mongol or Para-Mongol origin.

Analyzes of the inscriptions of Bugut and Hüis Tolgoi allow the assumption that the Rouran or their ruling class spoke Mongolian.

Mongolian autonomy in the People's Republic of China