The Republic of Buryatia is located in the Far East Federal District on the border with Mongolia . It covers the eastern shore of Lake Baikal and extends to the Jablonowy Mountains . The most important rivers of the republic are the Selenga , the Barguzin and the Upper Angara .

The Buryats are the titular ethnicity of the Republic of Buryatia. In the 2010 census, 972,021 inhabitants were determined. Of these, the Buryats made up 30% and the Russians 66%. Other larger ethnic groups are the Ukrainians and the Tatars . Of the "indigenous peoples of the Russian north" , the Evenks with 2,974 inhabitants live mainly in the north of the republic . In Eastern Sayan on the upper reaches of the Oka in the extreme southwest of the republic is the settlement area of ​​the small Turkic-speaking people of the Soyots , of whom 3,579 live in this part of the country.

The official languages ​​are the Buryat language and the Russian language .

The Buryats profess themselves mainly to Buddhism ( Vajrayana or Lamaism ). Buryatia is one of the centers of Tibetan Vajrayana Buddhism in Russia , along with Kalmukia and Tuva ; there are some monasteries.

Buryatia is divided into two city districts and 21 Rajons (districts).

See: Administrative Divisions of the Republic of Buryatia

The capital Ulan-Ude is the only big city. Severobaikalsk , Gussinoosjorsk and Kjachta follow at a great distance . There are a total of six cities and 14 urban-type settlements in the republic .

See also : List of cities in the Republic of Buryatia 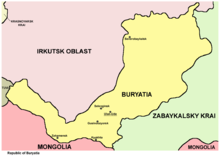 The Buryats belonged to the Mongol empire of Genghis Khan , which continued to exist there even after his death. The originally Russian city of Verkhne-Udinsk emerged from the construction of a Cossack fortress in 1666 between the two rivers Uda and Selenga, which was later renamed Ulan-Ude . The region's economic growth began with the construction of the Trans-Siberian Railway . In 1923 the Buryat Autonomous Soviet Socialist Republic (ASSR) was established. Before that there was a strong movement in Buryatia to unite the area with Mongolia. With the end of the Soviet Union, Buryatia declared itself sovereign and became an autonomous republic within Russia in 1992. President of the republic is Alexei Zydenow.

When the parliament dissolved the Supreme Court "to save costs", a party spoke up which spoke of a Russian occupation and was striving for independence from Buryatia. At the same time, the representation of Buryatia in Mongolia was abolished in 2018, obviously to prevent the establishment of closer relations between the Mongol peoples; the official Russian representation at the embassy was carried out by a person in charge who was averse to Buryat national affairs.

The Trans-Siberian Railway runs through Buryatia . The largest airport is Baikal Airport near Ulan-Ude. The region is one of the well-developed within Siberia and is rich in natural resources. Mining, the wood industry, but also agriculture are among the most important branches of the economy.