The Republic of Komi ( Russian Республика Коми , Komi Коми Республика) is a federal subject of Russia in the federal district of Northwestern Russia .

The Komi Republic is located in the far northeast of Europe , a sparsely populated taiga and tundra region. The landscape is mainly flat, in the northwest lies the Timan Ridge , in the east it borders on the Ural Mountains . The most important rivers are the Pechora and the Wytschegda , a tributary of the Northern Dvina . The primeval forests of Komi are the largest contiguous primeval forest area in Europe and have been a UNESCO World Heritage Site since 1995 . The Manpupunjor Rocks are one of the Seven Wonders of Russia . 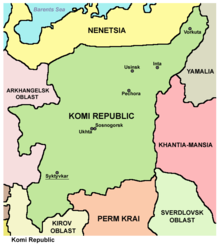 The most important place and currently the only major city is the capital Syktyvkar . Other large towns are Ukhta , Vorkuta , which has become known primarily as a penal colony , Pechora , Ussinsk and Inta .

See also : List of cities in the Komi Republic

The Komi are a Finno-Ugric people. Until the Soviet era, they lived almost among themselves. From the Stalin era to the end of the Soviet Union, both the number of inhabitants and the ethnic composition of the population changed dramatically. In addition to deportees, members of all Soviet peoples came to the area for economic reasons. The Komi became a minority in their own country. Russians make up the majority of the population today. Other important ethnic groups are the Ukrainians , Tatars , Belarusians , Russian Germans and Chuvashes . Azerbaijanis , Bashkirs (3,149 people in 2002), Moldavians (3,447 people in 2002), Mari , Lithuanians , Udmurts and Uzbeks also settled in their thousands. After the collapse of the Soviet Union , many immigrants returned to their home regions. Therefore, the population decreased from 1989 to 2010 by 349,658 people or 28%.

The official languages ​​are Komi and Russian . The majority of the population professes Russian Orthodox Christianity .

Composition of the population according to ethnic groups and territorial units of the Komi Republic according to the 2010 census
The decline in the proportion of ethnic Komi in the total population in the last census period (2002-2010) is particularly noticeable and is due to increasing assimilation (among other things through mixing of the population groups, i.e. marriages between Komi and Russians, whereby the children resulting from these connections mostly grow up Russian-speaking). Ethnic Komi make up the largest population group in only five of the 20 territorial units (urban districts or Rajons) of the Komi Republic. These are exclusively sparsely populated rural areas, while the Russians are by far the largest group in the larger cities .

The Komi Republic is divided into five city ​​districts and 15 Rajons (districts).

The Russians began to settle the area in the late Middle Ages . In 1921 the Komi Autonomous Oblast was formed within the Russian SFSR , which in 1936 became the Komi ASSR . After the collapse of the Soviet Union in late 1991, Komi became a subject of the Federation of Russia.

From 2010 to September 19, 2015 Vyacheslav Gaiser was head of the republic. He was dismissed and arrested on corruption charges.

The most important traffic axis is the Pechora Railway from Moscow to Vorkuta . Forestry is practiced on a large scale. The area is rich in mineral resources, especially coal, petroleum, natural gas and iron ore.

Russia's first oil production facility was put into operation in 1745 on the territory of today's Komi Republic, on the Ukhta River . However, oil production on an industrial scale did not begin until the middle of the 20th century and was expanded significantly by the Soviet Union , especially from the 1960s / 1970s .

One of Russia's oldest environmental movements can be found in the region. It was founded in the 1980s and campaigned for the rehabilitation of leaky oil pipelines. Thanks to her, the nuclear tests on Novaya Zemlya are said to have been stopped and she had resisted test drillings from Lukoil .

Oil pipelines in northern Russia are particularly heavily polluted due to the large temperature differences from summer to winter and the permafrost soil that thaws in summer . During the 1990s, due to the turmoil of privatization, thousands of leaky pipelines were not repaired, causing environmental damage. In 1994 more than 100,000 tons of crude oil ran into the tundra near Ussinsk and contaminated the soil and the Kolva and Pechora rivers .