The Nizhny Novgorod Oblast ( Russian: Нижегородская область / Nischegorodskaja oblast ) is an oblast in the eastern part of European Russia in the Volga Federal District .

The oblast is bordered by Kirov Oblast to the north, the Mari El and Chuvash republics to the east, the Republic of Mordovia to the south and Vladimir Oblast to the west . In an area almost as large as Austria , the Nizhny Novgorod Oblast comprises 25 cities and over 4,500 villages. The oblast has an important bridge function between Moscow and the Volga republics and Siberia. The most important traffic connection is the Trans-Siberian Railway .

The oblast lies on the Volga, which is an important traffic axis for shipping , other rivers are the Oka and the Klyasma .

The Principality of Nizhny Novgorod was established in the 13th century and became part of Moscow in 1393 . Industrialization began in the second half of the 19th century . During the Soviet era the oblast was called:

Palace of Culture of Nizhny Novgorod

Note: the proportions refer to the total number of inhabitants. Including the group of people who did not provide any information about their ethnic affiliation (2002 758 and 2010 42,349 people)

The area's population is over 90% Russian. The Tatars, Ukrainians and Mordvins are the only significant ethnic minorities in Nizhny Novgorod Oblast. Their number - like the number of Chuvashes, Mari, Belarusians and Jews - is falling sharply, however. On the other hand, numerous people have immigrated from the Transcaucasus and Central Asia since the end of the Soviet Union. In addition to the Armenians and Azerbaijani, especially the number of Yazidis (2010: 3,781 people) and Tajiks (1989: 528; 2010: 2,145 people).

The Nizhny Novgorod Oblast is divided into 48 Rajons and 4 urban districts .

The urban districts are made up of the four largest cities in the oblast, the capital and megacity Nizhny Novgorod , the major cities of Dzerzhinsk and Arsamas and the “ closed city ” (SATO) Sarov . There are a total of 28 cities and 55 urban-type settlements in the oblast. 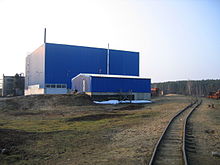 The most important branches of industry are car production, mechanical engineering, food processing and the chemical industry.

The following important information is missing from this article or section:
What about the main modes of transport?
Help Wikipedia by researching and pasting it .

Of the large number of narrow-gauge railways that were built from the 1930s onwards mainly for the transport of wood and peat and were mostly still in operation in the 1980s, only two peat railways remain in the oblast today (as of 2012) The Alzewo peat railway and the Kerschenez peat railway , as well as some factory railways , for example at the Kaprolaktam chemical factory in Dzerzhinsk and at the Peschelan gypsum works near Arsamas .