The Kamchatka Region ( Russian Камчатский край Kamtschatski krai ) is a federation subject of Russia , which was formed on July 1, 2007 through the merger of the two subjects Kamchatka Oblast (171,266 km²) and the Koryak Autonomous Okrug (293,899 km²). Geographically, it occupies the entire Kamchatka Peninsula as well as some areas north of it.

The basis for the merger was a referendum in the two subjects on October 23, 2005, in which the majority of the residents voted in favor. Based on this, on July 7, 2006 , the Russian Federation Council passed the law “On the formation within the Russian Federation of a new federal subject through the merger of the Kamchatka Oblast and the Koryak Autonomous Okrug”, which laid down the formation of the Kamchatka region on July 1, 2007 . The capital of the region is the former oblast capital Petropavlovsk-Kamchatsky . In the districts ( Rajons ) the old structure of the two subjects was retained.

In fact, the two subjects continued to exist. At the time of the unification, neither the creation of uniform institutions for both territorial units nor the merging of their legislation had been completed. Since there are no paved roads between the south of the peninsula and the previous Korjak district and air traffic is only irregular due to the weather, the economic and social division between the south and the extremely sparsely populated north of the region is likely to continue for the time being.

The 2010 census showed a population of 322,079 people. The indigenous Koryaks are a Paleo-Siberian people. However, they are only a small minority in their home republic (6,640 people or 2.1% of the population). The vast majority of residents belong to Slavic ethnic groups , including Russians with 252,609 (78.4%), Ukrainians with 11,488 (3.6%) and Belarusians with 1,883 (0.6%) members. Other significant minorities are the Koreans , Tatars and Mordvins as well as other immigrants from former Soviet republics (Armenians, Azerbaijanis, Uzbeks, etc.). In addition to the Koryaks, there are other small groups of Siberian peoples. These include the Itelmen (2,394 people; 0.74%), Ewenen (1,872 people; 0.58%), Kamtschadalen (1,551 people; 0.48%) and Chukchi (1,496 people; 0.46%). At the last census, 28,084 people (8.7%) did not give a racial answer. This group of people is presumably often a Slavic-Siberian hybrid of the Russian language, who did not want to count themselves either among the locals or among the immigrants.

The official languages ​​are Korjak in the formerly independent Autonomous Region of the Korjak and Russian . In addition to supporters of the Russian Orthodox Church, there are also numerous shamanists and a few Muslims (mainly Tatars).

The Kamchatka Region is divided into eleven Rajons and three urban districts . A total of five urban and 47 rural communities (corresponding to gorodskoje posselenije and selskoje posselenije ) with a total of 81 localities are subordinate to the Rajons (status: 2015, last change 2012). Almost half of all localities are in the Jelisowski and Milkowski districts in the area around the regional center of Petropavlovsk-Kamchatsky; there and in the urban districts of Petropavlovsk-Kamchatsky and Vilyuchinsk, which are also located in this part of the region, together almost 90% of the population live. In the other Rajons, the communities usually only include the eponymous locality, in rare cases two localities. In the districts of Oljutorski, Penschinski, Sobolewski and Ust-Bolscherezki there are also a total of six localities on non-parish territory (meschselennaja territorija).

Four Rajons and the urban district of Palana, which was subsequently spun off from the former Koryak Autonomous Okrug, still have a special status under this name within the region (highlighted in gray in the tables). 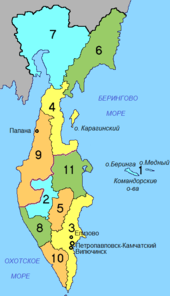 In the Kamchatka region there is by far the largest city, the administrative center of the Petropavlovsk-Kamchatsky region, two other cities, Yelisovo and the " closed city " (SATO) Vilyuchinsk , as well as three urban-type settlements .

The city of Klyuchi and the urban settlements of Ust-Bolsheetsk , Ust-Kamchatsk , Oktyabrsky lost their status between 2004 and 2010 and were downgraded to villages (Selo).

The Kamchatka Peninsula has more than 160 volcanoes , 29 of which are considered active. Here is also the Klyuchevskaya Sopka , the largest volcano in Eurasia, and the Valley of the Geysers .

The main industries in the region are hunting , fishing , mining (including gold and coal) and tourism . Reindeer herding dominates agriculture . The Kamchatka region is also the location of major military bases.