The Vladimir Oblast ( Russian Владимирская область / Wladimirskaja oblast ) is an oblast in the Central Russia region northeast of Moscow .

The oblast is conveniently located along the rail and road links from Moscow to the east ( Nizhny Novgorod ). The largest rivers are the Oka and the Kljasma .

The Oblast is bordered to the north by the Ivanovo , east to the Nizhny Novgorod Oblast , the south by the Ryazan Oblast , on the west by the Moscow Oblast and in the northwest of the Yaroslavl Oblast .

The area was originally settled by Volga Finns . However, Slavs immigrated to the region early in the Middle Ages. They soon made up the majority of the population. The Grand Duchy of Vladimir was established in 1157 when Prince Andrei Bogolyubsky moved his seat from Kiev here. The Mongol storm in 1238 left the region extremely devastated. In 1362 it came under the sovereignty of the Grand Duchy of Moscow .

From 1708 to 1780 - from 1,721 in the Empire  - the area belonged to Vladimir as Vladimir Province to province Moscow . In 1780 it was spun off as governorship of Vladimir , which existed until 1796. The then formed Vladimir governorate existed until 1929 as part of the RSFSR of the Soviet Union . The Vladimir Oblast was formed on August 14, 1944 from parts of the three Oblasts Ivanovo , Gorky and Moscow . 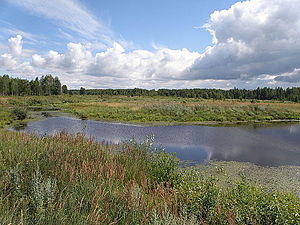 Note: the proportions refer to the total number of inhabitants. Including the group of people who did not provide any information about their ethnic affiliation (2002 16,635 and 2010 95,410 people)

The area's population is over 95% Russian. Other larger ethnic groups that have settled there since the early days of the Soviet Union are the Ukrainians, Jews (1959: 2,173; 2010: 460 people), Tatars and Belarusians. However, their numbers are falling sharply. By contrast, thousands of people have immigrated from the North Caucasus, Transcaucasus and Central Asia since the end of World War II. In addition to the nationalities listed above, there are also many Tajiks (1989: 272; 2010: 1,786 people) and Georgians (1959: 224; 2010: 927).

The Vladimir Oblast is divided into 16 Rajons and 5 urban districts , including the " Closed City " Raduschny .

The most important cities are next to the administrative center of the Oblast, Vladimir , the cities of Kovrov and Murom , as well as Gus-Khrustalny and Alexandrov and the tourist center Suzdal . There are a total of 23 cities and 9 urban-type settlements in the oblast . 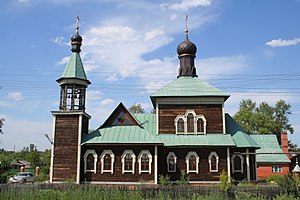 Church of Bishop Athanasius of Kovrov in Petushki
See also : List of cities in Vladimir Oblast

In the 19th century, flax cultivation and processing began as defining branches of the economy. The most important industries today are heavy industry, metal processing, glass and food industries.