The Voronezh Oblast ( Russian Воронежская Область / Voroneschskaja Oblast ) was established in 1934 and is located in southwestern Russia, around 500 to 600 km south of Moscow . The administrative center is the city of Voronezh . The oblast borders on the Russian oblasts of Belgorod , Kursk , Lipetsk , Tambov , Saratov , Volgograd and Rostov and, in the southwest, on the Luhansk Oblast in Ukraine .

Voronezh Oblast is located in the center of the Eastern European Plain, north of the Donets Basin . In the west of the area stretches the Central Russian Ridge , in the east - the Oka-Don plain and the Kalach ridge . The northern part of the area is in the forest steppe zone, the southern part - in the steppe zone with predominant black earth soils . On the territory of this area there are 738 lakes, there are 1343 rivers and streams that are over 10 kilometers long. The most important river is the Don , which flows through the oblast in a north-south direction. It flows through the Voronezh region for 530 of its 1870 kilometers total length. The second most important river is the Voronezh . About 10 percent of the territory is covered with forests, with the deciduous forests dominating, including oak , ash , maple and linden trees .

On the territory of the Oblast there are two state nature reserves, the Voronezh Biosphere Reserve and the Chopersky Nature Reserve, with a total area of ​​35,000 hectares .

Climatically, the oblast lies in the zone of the temperate continental climate . In winter, the average temperature is −9 ° C, with predominantly cloudy weather conditions. The mean values ​​in July are +21 ° C, dry, bright weather dominates, with often calm prevailing winds. The growing season lasts between 185 (in the north) and 200 days (in the south). The annual rainfall amounts to an average of 500 mm per square meter.

The area has mineral resources including copper , nickel , titanium and phosphorite . 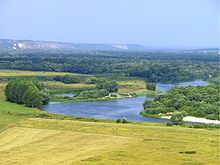 The Don in Voronezh Oblast

As the leading branch of the economy, industry generates a quarter of the regional gross national product; 22 percent of the working population is employed there. There are 5,450 industrial companies in the oblast, of which around 300 are large and medium-sized companies. The most important branches of industry include aircraft construction (long-haul aircraft such as IL-96 , regional - haul aircraft such as AN-148 ) and the chemical and food processing industries. The fertile black earth soils enable intensive agriculture. The oblast has 3,812,600 hectares of arable land, including 2,916,000 hectares of arable land. Grains, sugar beets and sunflowers are grown, there is also fruit growing and cattle breeding.

Due to its geographical location, the Voronezh Oblast is an important transport and logistics hub in southern central Russia.

The territory of Voronezh Oblast has been inhabited by people (e.g. Scythians , Pechenegs or Khazars ) since the Paleolithic . Since 1240, the area was under the influence of the Golden Horde . After the collapse of the Horde, the area fell to a splinter state of the Golden Horde, the Crimean Khanate , which, together with the Nogaier Horde, ruled large parts of the steppe and undertook regular raids into Russia, during which many slaves were taken. After the gradual displacement of the Crimean Tatars and the further consolidation of the Grand Duchy of Moscow in the 16th century, the area became part of the Russian Tsar , which initially established border fortresses against the Crimean Tatars here. From 1708 to 1725 the area belonged to the Azov governorate . In 1711 Voronezh became the capital of this governorate, which was renamed as Voronezh governorate in 1725 . With the construction of railway lines in the 1860s to 1870s, industrialization began in the territory. On May 14, 1928, the region was incorporated into the new Central Black Earth Oblast . This structure was dissolved on June 13, 1934, and part of it became the Voronezh Oblast within its current borders. During the Second World War , part of the area was conquered by the Germans in 1942 ; the front line ran along the Voronezh River. After fierce fighting, the area was liberated in 1943 .

Note: the proportions refer to the total number of inhabitants. Including the group of people who did not provide any information about their ethnic affiliation (2002 11,857 and 2010 110,749 people)

The Voronezh Oblast is divided into 31 Rajons and 3 urban districts , which are formed by the largest city by far Voronezh as well as Borisoglebsk and Novovoronesch . Other larger cities are Rossosch and Liski (in the Soviet Union Georgiu-Desch after Gheorghiu-Dej ). 63.5 percent of the population lives in the 15 cities and 17 urban-type settlements , 36.5 percent in rural areas.

Higher education in the Voronezh Oblast includes 39 colleges that educate 133,300 students. There are also over 60 science and research institutes.