Pecenek is a redirect to this article. For the Turkish soccer player, see Arif Peçenek . 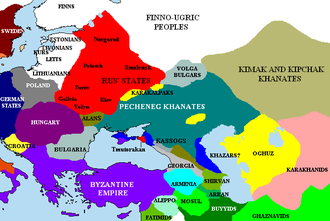 Eastern Europe with the Petschenegen settlement area around 1015

Mahmud al-Kāshgharī mentioned them under the name Beçenek as one of the 24 Oghusian tribes. As a totem animal they had a gyrfalcon . Their tribal name means "he who works well and makes an effort" in Old Turkish.

After the fall of the Gökturk Empire , the Pechenegs moved west from Western Siberia . In the process, they were finally driven across the Volga by other Oghusian tribes in 889 . In 896 they allied themselves with the Bulgarian Tsar Simeon I and defeated the Magyars in the area of Etelköz , north of the Black Sea. After the defeat, the Magyars moved west, where they settled in the upper Tisza region (today's Hungary ).

In the 10th century the Pechenegs fought long battles with the Russians ( Kievan Rus ) and the Khazars living on the Volga . In 968 they besieged Kiev and in 972 they killed the Kiev Grand Duke Svyatoslav , who had returned from a great and unsuccessful campaign against Byzantium. At the height of their power in the 11th century, they ruled the area between the Talas and the Danube. In 1036 they were severely beaten by Svyatoslav's grandson Yaroslav the Wise , and under the pressure of the Kipchaks they then fled across the Danube , where they now threatened Byzantium several times and also feuded each other . King Stephen I defeated them in 1003 and 1021, but from 1061 they established themselves in Wallachia and invaded Hungary again in 1067/68.

According to Arab reports, the first Pechenegs converted to Islam from 1009, and in 1068 a loss-making civil war broke out between the Muslim minority among the Pechenegs and the majority of the other faith, in which the Muslims triumphed and then attacked Constantinople in alliance with the Seljuks . After the bloody defeat in 1091 at the Battle of Levounion , the Pechenegs withdrew behind the Danube. Byzantium ( Alexios I. Komnenos ) and the Kipchaks under Boniak and Tugorkhan had allied against them. Even so, it remained unclear until the battle whether the Kipchaks would fight with or against the Byzantines. To be safe in the future, the Byzantines massacred the captured Pechenegs after the battle .

Their remains served the Byzantines (Danube border) for a while and disappeared in a new defeat at Beroe (Berrhoia) in 1122. Some had submitted to the Magyars and were settled in Hungary in 1123 as border guards of the Hungarian Gyepű system , others went to the related Turkic tribe of the Kipchaks and of the Oghusian population of Anatolia . Nevertheless, there was a residual empire in Wallachia until 1171, before it was conquered by the Kipchaks ( Cumans ).

The Pechenegs against the "Scythian" of Svyatoslav I.

In Russia , in the last census in 2003, seven citizens identified themselves as Pechenegs, which was not taken seriously by the authorities and was not included in the final report.