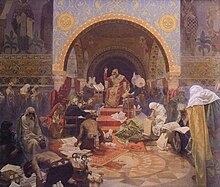 Simeon, Tsar of the Bulgarians from the Slav Epic by Alfons Mucha (1923) 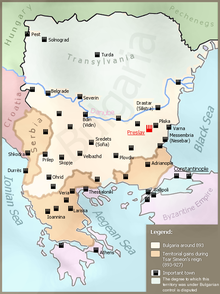 Expansion of Bulgaria under Simeon I.

Simeon's envoy to the Fatimids .

Simeon I also called Simeon the Great (or Symeon ) ( Bulgarian Симеон I. Велики / Simeon I. Veliki; * 864 in Pliska ; †  May 27, 927 in Preslav ) was Knjaz from 893 to 913 and Tsar des Bulgarian Empire . His reign is widely regarded as a highlight of Bulgarian history and is now seen as the "Golden Age" of Bulgarian culture.

Young years and accession to the throne

Simeon was the third son of Boris I , the first Christian ruler of Bulgaria with his wife Maria. Simeon grew up in Constantinople , where he enjoyed a high level of education at the court of the Byzantine emperors. He studied theology and secular philosophy , which is why his contemporaries called him "half-Greek", at the famous University of Constantinople . He completed his studies in 886. He then returned to Bulgaria and entered the Pantelejmon monastery near Preslav as a monk , where he devoted himself to literary activities.

Simeon succeeded his brother Vladimir Rassate on the throne in 893 , who was deposed at the Pliska People's Council convened by Knjaz Boris .

Withdrawal of the Bulgarians after an attack by the Magyars.

With Simeon's accession to the throne, the long lasting peace with Byzantium came to an end. The immediate occasion, a trade question, was a rare occurrence for that time. In 893 the Byzantine emperor Leo VI handed over the , at the instigation of his father-in-law Stylianos Zautzes , the trade monopoly with Bulgaria to two Greek merchants. Thereupon the merchants, without consulting the Bulgarians, moved the market for Bulgarian imported goods from Constantinople to Thessaloniki . In addition, the Bulgarian traders were burdened by higher tariffs.

When the peaceful means were insufficient to remedy this situation, Simeon attacked the surprised Byzantines in 894. The quickly assembled Byzantine army, led by the strategist Krinites, was defeated in Macedonia . Since the war broke out without preparation, Simeon withdrew. For the further course of the fighting, the Byzantines were able to win the Magyars under Árpád as allies in the fight against Simeon. The Byzantine fleet made it possible for them to cross the Danube, and together with the Byzantine army that invaded Thrace, they pinned Simeon in 895. Simeon, who was only prepared to invade the south, finally asked for peace.

After the departure of the Byzantines and still during the peace negotiations, Simeon turned to the north. When the Magyars were fighting in Pannonia at that time , the Bulgarian tsar allied himself in 896 with the Pechenegs living on the Dniester and defeated them with devastation. After the defeat, the Magyars left their territories in Bessarabia forever and moved further west, where they settled in the upper Tisza region and thus no longer posed a threat to the Bulgarian Empire for the time being.

The Bulgarians win at Bulgarophygon .

After the Magyar threat was averted, Simeon I concentrated the Bulgarian troops in Thrace in the summer of 896. In the same year he defeated the Byzantines at Bulgarophygon (now Babaeski ), not far from Andrianopol, and conquered northern Thessalia , Epirus and large parts of what is now Macedonia. The Byzantines, who had found themselves in a difficult position again because of the advance of the Arabs in the east, again committed themselves to pay annual tribute to the Bulgarians and to cede further areas on the Black Sea, Epirus and southern Thessalia. The Bulgarians rose to become the “most privileged economic nation”, all economic restrictions were lifted and the Bulgarian market was relocated back to Constantinople. This peace treaty was valid until 913, with one exception in 904. Debeltos was agreed as the place of delivery of the Byzantine tribute .

In the course of these conflicts between Bulgaria and Byzantium, Serbia was more inclined to Byzantium. But in the domestic political struggles for the Serbian throne, Simeon supported Petar Gojniković , which led to a twenty-year (897-917) peace. However, when the Serbian Zupan turned to Byzantium, Simeon intervened with an army in Serbia and deposed him through Pavle Branović . During this time Serbia came under Bulgarian sovereignty.

After the conquest of Thessaloniki by the Arabs in 904, Simeon saw the opportunity to incorporate the city into the Bulgarian Empire. However, the Byzantines were able to buy the city out by paying higher tributes. The Byzantines also gave in to Simeon's territorial claims, so that the border between the two countries was only about 20 km away from Thessaloniki. Simeon used the following years of peace to expand his seat of residence Preslaw and to promote the blossoming Church Slavonic literature.

The capture of Adrianople

In May 912 the Byzantine Emperor Leo VI died. He was succeeded by Emperor Alexander . When the Bulgarian ambassadors arrived in Constantinople to renew the peace of 896 and to demand annual tribute payments, Alexander refused to do so, triggering a new war that lasted a total of fifteen years. This time Simeon went to war with the aim of destroying Byzantium, acquiring the Eastern Roman imperial crown and thus taking over hegemony over the Eastern Christians. He entered into negotiations with Emperor Constantine VII and was received by the Patriarch Nicholas I in Constantinople . He received the imperial crown, but was only recognized as the " Basileus (Emperor) of Bulgaria" . 914/15 Simeon conquered the Byzantine provinces of Macedonia (at that time near Andrianopol), Thessalonica and Durazzo.

Tsar Simeon I defeats the Byzantines at Anchialus

Although the Byzantines had won the Serbs to fight Simeon, after the devastating defeat in the Battle of Anchialos on the Black Sea on August 20, 917, they had to ask him for peace. Simeon rejected the request and declared himself - according to the imperial title - to the " Tsar (Gr. Basileus ) of the Bulgarians and Rhomeans " (= Eastern Romans), as the Byzantines called themselves. 918/919, Simeon proclaimed the autocephaly (independence) of the Bulgarian Orthodox Church and elevated it to the Patriarchal Church . In 918 Simeon undertook a large-scale campaign in the northern and central Greek territories and reached the Gulf of Corinth . Since the conquest of Constantinople was impossible without a navy, Simeon even allied himself with the Fatimid caliph Abdallah al-Mahdi .

In the following time the Serbs attacked the Bulgarian Empire and embroiled Simeon in a protracted war that led to the integration of Serbia into the Bulgarian Empire as a province in 924. Since part of the Serb population in neighboring Croatia took refuge, followed by a two-year Bulgarian-Croatian war, through the mediation of Pope John X was interrupted. The resumed contacts with the Pope brought Bulgaria closer to the Roman Church . When a papal embassy arrived in Preslaw in the summer of 927 to crown Simeon I as emperor and to recognize the independence of the Bulgarian church, Simeon had already died.

Simeon I died of a heart attack on May 27, 927 while he was preparing a new siege of Constantinople. According to tradition, the news that his troops were defeated in battle against the Croatians under King Tomislav was the cause of the heart attack. Simeon's reign was marked by a war against Byzantium , during which the Bulgarians were able to expand their territory considerably.

During the reign of Simeon I, the First Bulgarian Empire reached the height of its development, which earned Simeon the nickname the Great. It included all of Moesia , most of Thrace and Serbia , part of the Adriatic coast, Thessaly, Sirmium , Wallachia and Transylvania. Simeon marched before the gates of Constantinople several times, but was never able to take the city. The Bulgarians received support from the Pechenegs during the fighting , while the Hungarians and Croats allied themselves with Byzantium.

Simeon had a son Michael from his first marriage to Kubera. His second wife Miriam, a sister of the Boljar Kawkhan Georgi Sursuvul , had given birth to three more sons, namely Peter, Ivan and Bojan (or Benjamin). The reasons why Simeon excluded his firstborn son from the line of succession and put him in the monastery are unknown. Even before his death, Simeon appointed the younger Petar I as his successor under the initial reign of the boyar Georgi Sursuvul.

Four months after Simeon's death, on October 8, 927, under his son Tsar Petar I , Byzantium finally recognized the imperial title of Tsar and autocephaly in the form of patriarchy. Furthermore, the Byzantines pledged to pay tribute to the Bulgarians. This peace would last for almost 50 years.

In 893, Knjaz Boris , Simeon's father, called the Pliska People's Council . In order to consolidate the detachment of the newly Christianized state from its pagan roots, the council decided to relocate the capital from Pliska to Preslav and to introduce Old Church Slavonic (also known as Old Bulgarian ) as the state language of the Bulgarian Empire. In this context, in 893 Tsar Simeon appointed the Slav apostle Kliment von Ohrid , who was active in Bulgaria, " [...] as the first bishop of" Bulgarian language " ".

Simeon I moved the capital from Bulgaria to Veliki Preslav , expanded it and built numerous churches and monasteries. In the new imperial metropolis, Simeon I established the well-known Preslaw School and established it as the third spiritual and cultural center of Bulgaria, alongside the Pliska and Ohrid schools built by his father Boris , in which other students of the Slav apostles Cyril and Methodius worked However, von Preslaw with her writers, philosophers and geographers had such a cultural weight that she did not need to shy away from competition with Constantinople. 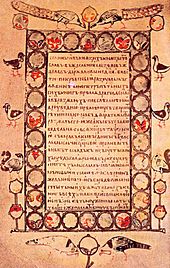 During this time, Bulgaria went over to a new, more suitable, Cyrillic alphabet , which was based primarily on elements of the Greek uncial script. Although labeled in Cyrillic , it should not come from Kyrill or, as some believed, from Kliment von Ohrid . At least it was first disseminated by the priest Konstantin von Preslaw and the school of Preslaw . During this time the literary activities of the monks Ioan Exarch , Tudor Doks, Presbyter Kozma and Chernorizec Hrabar also fell .

The anthology Zlatostruj ("Goldstrom"), translated from Greek sources, goes back to Simeon and had a lasting impact on the medieval level of education not only in Bulgaria, but also in Kievan Rus , where the volume later came to be. Following his suggestion, other Greek, mostly encyclopedic and theological works were also edited or translated into Old Bulgarian.

His reign later became the "Golden Age". named of the Bulgarian culture. The Bulgarian Empire stretched from the Black Sea to the Aegean and Adriatic Sea and became the strongest power in the Balkans . A wide range of sacred and profane building activities developed, combined with corresponding art and the creation of many books in Old Bulgarian.In contrast to Byzantine church architecture, there was a tendency towards very decorative masonry in Bulgaria (blind arch niches, mosaic decorations, fresco painting ). The famous painted Preslaw pottery was also created.

When the First Bulgarian Empire was founded, the ethnically diverse Slavs and Proto- Bulgarians united in one state. Under Simeon the Cyrillic alphabet was founded on the basis of 923 the Slavic declared the official state and church language. Thus the Church Slavonic literature, along with Christianity, became the decisive moment in the final coalescence of both peoples. In addition, the Cyrillic alphabet spread and developed into the basis of all other literature among the Orthodox southern and eastern Slavs . Simeon was the first ruler to introduce the title of Tsar under the Slavic monarchies.

Simeon I. is the namesake for Simeon Peak on Livingston Island in Antarctica.