Adria is a redirect to this article. Further meanings are listed under Adria (disambiguation) .

The following important information is missing from this article or section:
Adriatic Sea as reference altitude (see meters above Adriatic )
Help Wikipedia by researching and pasting it .

The Adriatic Sea is 820 kilometers long from northwest to southeast and an average of 160 km wide. The greatest width is about 220 kilometers. It covers an area of 132,000 square kilometers and is between 40 and 200 meters deep in the north basin (north of the Monte Gargano foothills). The southern part is significantly deeper and reaches its greatest depth between Durrës and Bari at 1260 meters. The southern end of the sea is the Strait of Otranto , where the distance between Italy and Albania is 71 kilometers.

The neighboring countries are Italy , Slovenia , Croatia , Bosnia and Herzegovina , Montenegro and Albania .

The north-western part, the upper Adriatic , is flat with some large lagoons . The largest is the Venice lagoon . After that, the Italian east coast south of Gabicce Mare suddenly becomes mountainous, with the entire coastline running relatively straight. Apart from the Tremiti Islands, there are no offshore islands. Only the in Puglia located Gargano -Gebirge protrudes some 50 kilometers to the east into the Adriatic Sea as a peninsula. The west coast of the Adriatic ends at the Italian boot heel near Otranto .

Adriatic coast near Budva in Montenegro

The east coast of the sea with the Istrian peninsula at its northern end is mountainous throughout. The Croatian landscape of Dalmatia occupies a large part of the east coast . The Bay of Kotor in Montenegro is about 30 kilometers long and is the largest bay in the Adriatic. The extreme southeast is again flat and swampy. There are well over a thousand islands along the entire east coast .

South of Shkodra in Albania extends along the coast of the Drin Gulf and also further south a wide lowland with partly untouched sandy beaches . Elongated lagoons have formed at many estuaries. The Adriatic coast ends at the bay of Vlora . The Albanian Riviera begins south of the city of Vlora on the Ionian Sea . 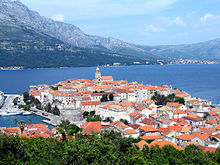 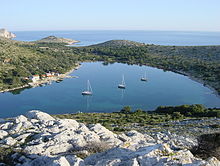 The climate is characterized by very warm, dry summers with little rain and mild, sometimes rainy and humid winters. In summer there are constant, weakly windy weather conditions. In winter, the Adriatic region is under the influence of low pressure areas from the Atlantic . This occasionally leads to warm south winds ( Scirocco ) and cold north winds ( Bora / Bura ).

The ocean current runs north along the east coast and south along the west coast. Often three equally large, pronounced eddies can be observed counterclockwise (in the upper, middle and lower third of the basin), each filling the entire width of the Adriatic. The Adriatic is an elongated basin with a narrow opening at the southern end (approx. 70 km wide). Therefore there is relatively little water exchange with the rest of the Mediterranean.

The salinity in the estuary of the large rivers (depending on the season and precipitation) is around 2.5 to 3% on the surface. Away from estuaries, the salinity in the north is around 3.4% and increases to 3.9% in the south. At a depth of 10 m, the water has almost the same salinity as the respective surface water away from the estuaries.

Lido on the Italian Adriatic coast 2012

Tourism is economically important for the neighboring countries. Many seaside resorts by this sea are known throughout Europe, some worldwide. These include:

The Adriatic Coastal Road (Jadranska Magistrala) runs along the east coast from Slovenia to Montenegro .

In 2004, the water quality was largely good to very good in a test commissioned by the ADAC away from the Po estuary on the Italian and Croatian coasts. The Adriatic is polluted by various types of waste from the neighboring countries .

The Adriatic is increasingly becoming the focus of environmental protection and climate change . The most visible signs are the increase in tropical fish stocks as well as increasing algae and jellyfish plagues. In 2007, the then Italian Environment Minister Alfonso Pecoraro Scanio warned that global warming and environmental pollution "are making the Adriatic into a closed basin in which there is no longer any life at a depth of 150 meters". In September 2007, the Adriatic was a topic of the first Italian national conference on global warming in Rome.