This article covers the city in Italy. For further meanings see Trani (disambiguation) .

Trani , or Turenum in ancient times , is a southern Italian port city in the Apulia region , Barletta-Andria-Trani province with 56,011 inhabitants (as of December 31, 2019). Until the end of 2007, the city was part of the province of Bari . 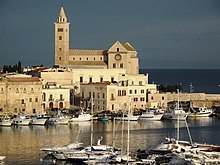 According to a legend, the city was founded by Tirenus, the son of Diomedes . The reason for this derivation was probably that Trani appears for the first time as a turenum on the Tabula Peutingeriana , the 12th century copy of an ancient Roman itinerary from the 4th century. However, the name comes from trana or traina , an old name for “bay”. By the 6th century at the latest there was a bishop in Trani. From the 9th century the area was ruled by Lombards , Byzantines , Saracens and again Byzantines.

Between 1010 and 1018 there were several revolts against Byzantine rule under the leadership of Melo da Bari . In 1063 Trani issued the Ordinamenta et consuetudo maris ('Rules and Customs for the Sea'), in which a kind of maritime law was codified for the first time for the area that was not under Byzantine rule. With the conquest of southern Italy by the Normans and after 50 days of siege by Robert Guiscard , Trani became part of the Norman Empire in 1073 . Since the early Middle Ages, Trani has developed into one of the most important ports in southern Italy for trade with the Orient. Trani's heyday and heyday was during the Crusades in the 12th and 13th centuries, when crusaders and merchants traveled to the Holy Land , mainly from Bari and Trani . Friedrich II promoted the German Order of Knights and the Jewish community. Trani was less affected by the general decline under the Anjou, as the port continued to be promoted, which was also the reason for a long war with Venice. After Trani came under the rule of various noble houses, it came under Venetian rule from 1495 to 1509 . King Ferdinand II of Naples had mortgaged the city to the Serenissima in order to finance a campaign against the French. In addition to Trani, the pledged cities also included Otranto , Monopoli and Polignano . In the 17th century a university for legal studies was established. The arson by French troops in 1799 represented a setback in development.

The city is a member of the Cittàslow , a movement founded in Italy in 1999 to slow down and increase the quality of life in cities through environmental policy, infrastructure policy, urban quality, appreciation of local products, hospitality, ecological awareness and quality of the landscape.

Since 2008 Trani has been one of the three capitals of the newly founded province of Barletta-Andria-Trani .

The miracle of Trani

A stele set up in Trani with the names of 54 young men from the village and that of Lieutenant of the Wehrmacht Friedrich Kurtz , commemorates the Second World War and especially of September 18, 1943. Back then, a few days after Italy switched sides to the Allies on September 8th, five German soldiers were shot dead from ambush.

In a documentary film Das Wunder von Trani , which was first broadcast on German television in 2012, three surviving contemporary witnesses explicitly point out that some English and Canadian soldiers had ambushed the Trani cemetery. The five German soldiers were in a military vehicle on their way back from Trani to neighboring Barletta . The regional Wehrmacht leadership assumed that only the Italian resistance movement was eligible for the act and ordered the shooting of ten Italian civilians from Trani for every soldier killed. On September 18, 1943, 54 men were rounded up on the market square of Trani - today Piazza della Repubblica - who then waited to be shot. The tension of everyone involved was increased by the escape of a hostage. In this situation several women turned to the mayor of Trani and the local archbishop, who negotiated with the lieutenant. As a result of the negotiations, the hostages were released in the afternoon and the shooting was not carried out. Friedrich Kurtz was not prosecuted for disobeying orders, but was no longer promoted and presumably transferred to the Eastern Front , where he is also said to have resisted firing squads. He is considered an example of "that moral courage and refusal to obey orders were also possible during the Second World War". Friedrich Kurtz lived in the Palatinate until his death in 1993. The mayor Giuseppe Pappolla and the archbishop Francesco Petronelli were taken over by the Italian King Victor Emanuel III. awarded the silver medal for bravery on October 18, 1943 on the market square in Trani. 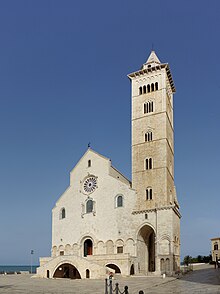 The Cathedral of San Nicola Pellegrino

Numerous historical buildings in Trani, such as the cathedral, have been built from the natural stone with the current trade name Trani (Italian: pietra tranese ). This light and reddish natural stone gives the city a distinct character. Trani is still extracted today in several stone quarries in the area around the city and sold throughout Europe.

Friedrich's son Manfred married his second wife, Helena Ducas, in the fort . Under the rule of the Anjou , the castle was expanded according to plans by the French military architect Pierre d'Angicourt. In 1533, Emperor Charles V had the fort expanded and fortified both on the sea and on the land side because of the advances in weapon technology, especially firearms. Two existing corner towers were converted into bastions .
Between 1586 and 1677 the fortress was the seat of a royal court.

The clock tower was built by the Commune in 1473 next to the campanile of the Church of San Donato and is the second tallest tower in the city. It is one of the rare examples of a public clock in the Kingdom of Naples .

As reported in the Historia traslationis Sancti Nicolai Peregrini by Diacono Amado, Bishop of Bisceglie , the Templars had a settlement in Trani before 1153. Trani was an important base for the knightly orders on the way to the Middle East and Jerusalem. Next to the church was a hospice for pilgrims to Jerusalem.

The east facade of the church with the three semicircular apses faces the harbor. In front of the three-nave, four-bay basilica is a spacious portico in which three portals open into the interior. In the lunette above the main portal there is a Romanesque relief depicting the Annunciation .

The neoclassical campanile was built in 1863 based on a design by Giuseppe Monetti.

In the church there is a colorful sculpture of the plague saint Rochus of Montpellier . The original campanile was demolished in 1910 and replaced by the current clock tower.

The city has a train station on the Adriatic Railway with regular connections to Bari and Foggia. Buses run from Trani to Naples , as the only rail connection goes via Benevento and Caserta. There are also buses to Andria.