As a result of the political crisis after the end of the First World War, Viktor Emanuel tolerated the takeover of power by Benito Mussolini and the Fascist Party, as well as the subsequent establishment of a dictatorship , which he maintained until 1943. In 1943, after the start of the Allied invasion of Sicily , he turned away from Mussolini and took an active part in his overthrow. In 1946 the monarch abdicated in favor of his son Umberto II and went into exile.

Viktor Emanuel as a cadet student

Victor Emanuel was born in Naples on November 11, 1869 . He was the only descendant of the Italian Crown Prince Umberto (later Umberto I) and his wife Princess Margarethe of Savoy-Carignan . He was given the title of Prince of Naples ; when his father took over the government in 1878, he was the new heir to the throne .

Between 1881 and 1889 Viktor Emanuel received training at the Scuola Militare Nunziatella in Naples and the Accademia Militare di Modena . He then served as an officer in various units in Naples, Como and Florence . In addition, the Crown Prince showed a keen interest in history , geography and numismatics and belonged to the renowned Accademia Nazionale dei Lincei .

On October 24, 1896, Victor Emanuel married Elena of Montenegro , fifth daughter of the Montenegrin prince Nikola I. Petrović-Njegoš and his wife Milena Vukotić in the Palazzo del Quirinale in Rome . The marriage produced five offspring:

As a young monarch

After his father fell victim to an anarchist assassin in Monza on July 29, 1900 , Victor Emanuel became the new king and took his oath on the constitution in front of both chambers of the Italian parliament on August 11 . Italy was a constitutional monarchy ; and although Victor Emmanuel declared that he would stick to parliamentarism , the Albertino Statuto guaranteed the king extensive powers in foreign and military policy, as well as the right to appoint the head of government without the consent of parliament. The country's chronic political instability meant that the monarch, who was unusually short at 1.53 m, was described as shy and not very self-confident, had to get involved in day-to-day political affairs more often than he would have liked. Between 1900 and 1922 he had to intervene ten times to resolve a parliamentary crisis. In 1903 he appointed Giovanni Giolitti as the new Prime Minister , which he was to remain with interruptions until March 1914, thereby supporting the transition to a more liberal domestic policy . Giolitti promoted industrialization and brought about the internal balance with the socialists and the Catholic Church decisively. In terms of foreign policy, the monarch supported Giolitti's imperialist course , which culminated in the Italo-Turkish War of 1911/12 and the occupation of Libya and the Dodecanese .

Albert I of Belgium and Victor Emanuel III.

After the beginning of the First World War in August 1914, Italy initially retained neutrality , but in the following months moved away from the Triple Alliance with the German Empire and Austria-Hungary . Victor Emanuel approved the policy of Antonio Salandra , who had succeeded Giolitti in the office of prime minister, to advocate for territorial gains and power growth of Italy on the side of the Entente in the war ( sacro egoismo "holy egoism"). As a result of secret negotiations with the Entente in London ( London Treaty of 1915 ), Italy left the Triple Alliance, and Salandra decided to go to war against Austria-Hungary in May 1915. However, when he could not win a majority in parliament to enter the war, he submitted his resignation. Strongly influenced by public opinion in favor of war (including Gabriele D'Annunzio , Cesare Battisti , Benito Mussolini ), Victor Emanuel did not accept the resignation and left the Salandra government in office. Finally the parliament voted to join the war; on May 23, 1915, Italy declared war on the Danube Monarchy.

But the hoped-for quick military successes against Austria-Hungary did not materialize. Instead, a grueling trench war developed in the Alps , which instead of gaining ground resulted in high losses on both sides. Victor Emmanuel left Rome to serve as the nominal commander in chief of the armed forces at headquarters and at the front. However, he left the management of military operations to his Chief of Staff Luigi Cadorna and, from 1917, Armando Diaz . When a military catastrophe threatened after a successful offensive by the Central Powers ( Twelfth Isonzo Battle ) and the subsequent collapse of the Italian front on the Isonzo in October 1917, Victor Emanuel called his people to a national defense war. In order to prevent the defeat of the ally, French and American troops had to be sent as support. Only in the course of the internal dissolution of Austria-Hungary in October 1918 did the Italian army achieve a decisive victory in the battle of Vittorio Veneto , which led to the armistice of Villa Giusti on November 3, 1918 . Because of this success, Victor Emanuel enjoyed an undisputed position as an authority among the people and was nicknamed "Re Soldato" (Soldier King) or "Re vittorioso" (Victorious King).

Although Italy was one of the victorious powers of World War I, economic, social and political crises rocked the country. Unstable governments and unrest created a climate of fear that -  as in Russia  - the proletariat might claim power in a revolutionary uprising ( biennio rosso ). There was great dissatisfaction with the other victorious powers who refused to honor some of their territorial concessions, which led to the term vittoria mutilata ("mutilated victory"). For this reason, the poet and folk hero Gabriele D'Annunzio in 1919 occupied with nationalist irregulars of the city of Fiume in Istria call for its connection to Italy . For fear of a split in the army, Viktor Emanuel refused to end the illegal occupation under international law with the help of regular troops. Rather, even the king made no secret of the fact that he too was dissatisfied with the post-war regulations and wanted to see Italy's honor restored ( irredentism ).

The ongoing crisis led to the strengthening of the fascist movement Mussolini, who turned decisively against left ideologies and called for a strengthening of Italy's foreign policy. When Viktor Emanuel dissolved parliament on April 7, 1921 at Giolitti's request and scheduled new elections for May 15, Mussolini moved into the Camera dei deputati ( biennio nero ) with 34 other fascist MPs .

Fascism had grown into a mass movement when Benito Mussolini tried to take power in the country in a violent action in the autumn of 1922. To this end, at the end of October 1922, he gathered tens of thousands of fascist black shirts at the gates of Rome in order to usurp government power in a coup-like march on Rome . In order to avert an impending civil war , Viktor Emanuel refused the beleaguered Prime Minister Luigi Facta on October 28th to approve an emergency decree with which the army could have been used against the black shirts. As a result, Facta resigned from his office and on October 29 the king appointed Mussolini head of government in a coalition government with the participation of the fascists. Mussolini ruled within the parliamentary framework until 1924 before he began building a one-party dictatorship . Other parties were banned or dissolved, political opponents were persecuted and press censorship was introduced. The transformation into a dictatorial system was partly supported by royal decrees or edicts and thus tolerated. From 1925/26 the Kingdom of Italy was a dictatorship; Victor Emanuel was de jure the head of state , but politically he was pushed completely into the background by Mussolini. By 1943, the king was no longer to gain any political weight and was also no longer to deliberately exert any influence. An example of this was the transfer of supreme command of the armed forces to the " Duce ".

From the mid-1930s onwards, Italy sought closer ties to the National Socialist German Reich and pursued a policy of territorial gains. Victor Emanuel tolerated Mussolini's aggressive foreign policy and did nothing to oppose the illegal international war of aggression to conquer Abyssinia ( Italian-Ethiopian War 1935/36 ). The fascists played an effective propaganda card, as Victor Emanuel, after Mussolini had proclaimed the empire , on May 9, 1936, assumed the title of " Emperor of Abyssinia ". In addition, the monarch and head of government received the honorary title Primo Maresciallo dell'Impero (First Reichsmarschall), the highest military rank in the country. In April 1939 , Italian troops occupied Albania ; On April 12, the Albanian National Assembly offered Viktor Emanuel the royal crown in the form of a personal union, which was carried out a few days later.

After the beginning of the Second World War in September 1939, Viktor Emanuel spoke out against entering the war because the country was not prepared for a European war. Despite this warning, Mussolini declared war on the Western powers on June 10, 1940, and the Italian armed forces fought on the side of the German Reich from then on. However, the war developed into a fiasco for Italy ( Greco-Italian war , East Africa campaign and Africa campaign ), which is why it became increasingly dependent on the German Empire. The reputation of the king, who only appeared in public for troop parades or ship baptisms, suffered from the failures. When he visited parts of Rome destroyed after Allied air raids, he was greeted with sheer hatred.

After the Allied landing in Sicily in July 1943 ( Operation Husky ), Mussolini's previously undisputed position of power began to crumble, and Victor Emanuel also turned away from him. After the Grand Fascist Council had deposed Mussolini on July 24, 1943 by means of a vote of no confidence , the king had him arrested the following day. Victor Emanuel again exercised his full constitutional rights by entrusting Marshal Pietro Badoglio with the formation of a military government and personally assuming supreme command of the armed forces. On September 8, 1943, he announced the conclusion of an armistice with the Allies , thereby breaking the alliance with the German Reich. The Wehrmacht then occupied northern Italy ( Axis case ) and, in order to avoid arrest, the king, his government and family moved from Rome to Brindisi . In northern Italy, Mussolini, freed by German paratroopers ( company Eiche ), proclaimed the Italian Social Republic in Salò . The Germans could only capture Princess Mafalda of Savoy . She died on August 27, 1944 in Buchenwald concentration camp from her injuries, which had been caused by a USAAF bombing three days earlier.

With the end of the fascist dictatorship, calls for the abdication of Viktor Emanuel were loud. After the liberation of Rome by the Allies (June 4, 1944), the monarch returned to the capital and transferred his constitutional rights to his son Umberto , but retained the title of king.

To keep his dynasty on the throne, Victor Emanuel formally abdicated on May 9, 1946 in favor of his son. While he was assuming the title of Count von Pollenzo , Umberto II was only to remain King of Italy for 33 days before the country declared itself a republic on June 2, 1946 , following a referendum on the future form of government initiated by the US occupation authorities . The members of the House of Savoy were expelled from the country and Victor Emmanuel went into exile in Alexandria in what was then the Kingdom of Egypt . 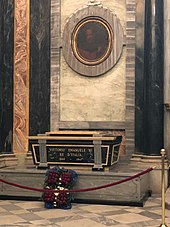 Tomb of Victor Emmanuel III. in the Santuario di Vicoforte .

He died there on December 28, 1947 at the age of 78. His makeshift grave was behind the main altar of St. Catherine's Cathedral in Alexandria until December 2017 . Initiatives to relocate to the Pantheon , where his two predecessors also rest, have met with widespread opposition from the Italian public right up to the present day. A corresponding claim by members of the House of Savoy was rejected as a "mockery" by the Jewish community of Rome (the Pantheon is located near the former Jewish ghetto in Rome, the residents of which were deported to the extermination camps in 1943). On December 17, 2017, his body was transferred to the Santuario di Vicoforte ( Piedmont ) after the bones of his wife Elena had been brought from Montenegro to Vicoforte a few days earlier. The reburial of his remains provoked anew old controversies about the role of the king during the time of fascism and the Second World War. Criticism was also leveled that the transfer took place in a state military aircraft.