Marie José of Belgium , full name Marie José Charlotte Sophie Amélie Henriette Gabrielle (born August 4, 1906 in Ostend , Belgium , †  January 27, 2001 in Geneva , Switzerland ) was a princess from the house of Saxe-Coburg and Gotha and the last queen from Italy . Her tenure as Queen, which lasted only a few weeks, earned Marie José the nickname “May Queen”.

Princess Marie José was born on August 4, 1906 in Ostend, Belgium. She was the only daughter of the Belgian King Albert I and his wife, Duchess Elisabeth in Bavaria . It was named after the maternal grandmother, Infanta Maria Josepha of Portugal .

She spent a large part of her childhood together with her older brothers Leopold, who later became King Leopold III. , and Charles in Brussels . The princess was tutored at home by governesses and tutors. Classes focused on languages, history, music and courtly virtues. Marie José developed a passion for music and the arts at an early age. In addition to piano lessons, she also received violin lessons from the famous Belgian violinist Eugène Ysaÿe , who was a friend of her mother's.

When the First World War broke out in 1914 , the royal family had to leave Brussels. For the sake of her safety, Marie José was brought to Great Britain with her brother Charles . During their stay, the siblings lived in the house of the British statesman and former Viceroy of India George Curzon . To continue their education, the princess, the Brentwood High School in attended Brentwood in the county of Essex . In 1916 she was sent to a convent school in the Italian community of Poggio Imperiale , near Foggia .

In Italy she met King Victor Emmanuel III. and know his family. Marie José, then ten years old, made friends with Crown Prince Umberto, two years her senior . While her brother Charles returned to Belgium after the end of the war, Marie José stayed in Italy to continue going to school. She kept visiting her parents in Laeken for a short period of time . Life there was strict and ceremonial. In 1924 Marie José attended her first court ball. For the occasion, she wore an antique pearl and diamond tiara that originally belonged to Stéphanie de Beauharnais . Marie José's education in Italy helped prepare her for what was seen as her future role in that country. Again and again she made secret appointments with Crown Prince Umberto. On October 25, 1929, the couple announced their engagement in Brussels.

Marriage and first years of marriage 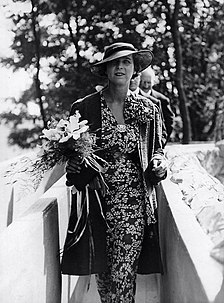 On January 8, 1930, Marie José married Crown Prince Umberto of Italy in Rome. Numerous ruling and former monarchs attended the celebrations. From then on she was Crown Princess and Princess of Piedmont. When she got married, she was supposed to change her first name to the Italian variation Maria Giuseppa , but she refused.

After their honeymoon in San Rossore and Courmayeur , the couple moved to the Royal Palace in Turin . The different characters of the two soon became clear. While Marie José was described as easy-going, spontaneous, and unconventional, her husband was seen as a punctual and narrow-minded person who stuck to the rigid military traditions of the House of Savoy . Nevertheless, he was also known as a thoroughly romantic person. Since she hardly shared Umberto's military ambitions, Marie José was increasingly drawn to festivals, concerts or car trips, where she mostly sat behind the wheel herself.

In 1931 Umberto was promoted to general. He and Marie José then moved to a villa in Naples . The villa was named Villa Maria Pia after the birth of the eldest daughter in 1934 .

The couple had four children in total:

Before their wedding, Marie José had the idea that she would marry a prince and live with him alone in a castle. About her marriage to Umberto, from which she hoped she would be happy, the princess later said in an interview: "We were never happy". At the time when her parents planned their association with the Italian Crown Prince, there was not a single descendant of a ruling Catholic dynasty in Europe with a prospect of the throne. After the abolition of the monarchy, the couple went their separate ways.

In October 1939, Marie José became President of the Italian Red Cross . Together with Anne, Duchess of Aosta, wife of Amadeus, 3rd Duke of Aosta , she attended the ceremony in which she was appointed President. She reacted very dismayed when the German Wehrmacht attacked Belgium in the course of the western campaign in June 1940. This quickly developed an aversion to anything German.

During the Second World War , the Crown Princess was one of the few diplomatic channels between the German-Italian camp and the other European countries that were involved in the war. A British diplomat in Rome stated that Marie José was the only member of the royal family who had a good political judgment. In 1943 she participated in unsuccessful attempts to reach a peace treaty between Italy and the United States. She was given a conversation partner from the Vatican . This was the diplomat Giovanni Battista Montini, who later became Pope Paul VI . has been. However, she undertook her attempts without the knowledge of her husband or father-in-law. After their failure, King Victor Emmanuel III sent. Marie José with her children to Sarre in the Aosta Valley region . So an attempt was made to keep Marie José out of any politics.

The princess was arguably one of the few members of the royal family who sympathized with the partisans . When she and her children went to Switzerland after the armistice in September 1943 , some partisans smuggled weapons, food and money for them. It was even suggested that Marie José be made head of a partisan brigade, but she refused.

Time as queen and life in exile

Queen Marie José and King Umberto with their children and the royal family visit Pope Pius XII . on the occasion of the accession to the throne in 1946

On May 9, 1946, Umberto succeeded his father as King of Italy and Duke of Savoy after his abdication . So Marie José became queen at his side. She and Umberto went on a journey of several weeks and toured Italy, which had been destroyed by war. The young royal couple made a positive impression on the population. Until the formal end of the monarchy in Italy on June 18, 1946, she was the country's last queen for 40 days.

After the abolition of the monarchy, Marie José and her family went into exile in Portugal . Marie José left Portugal in 1957 and went to Merlinge near Geneva in Switzerland with her children . She spent most of the rest of her life there. King Umberto II stayed in Cascais until his death in 1983 . The couple separated but did not get divorced, partly for political reasons. The republican constitution not only forbade the restoration of the monarchy, but also forbade male members of the House of Savoy to step on Italian soil. Nevertheless, Umberto had hopes of a return to the throne. Both were very devout Catholics and considered divorce harmful to a Catholic king.

Grave of Queen Marie José and her husband Umberto II.

For a few years she lived with her daughter Maria Beatrice and her children in Mexico . During her years in exile, Marie José traveled extensively and continued her interests in music and art. She wrote several books about her family and the history of the House of Savoy. For her activities she received the French Order of the Legion of Honor . After her husband died in 1983, she returned to Italy for the first time.

She died in Geneva on January 27, 2001 in her exile in Switzerland and was buried on February 2 of the same year at the side of her late husband Umberto II in the Abbey of Hautecombe in Savoy. 2000 guests were present at the funeral of the last Italian queen, including her nephew King Albert II of Belgium , King Juan Carlos I of Spain and Farah Pahlavi , the last Iranian empress. Marie José's death had been instrumental in bringing the Italian government to amend its constitution to allow male members of the House of Savoy to visit Italy.