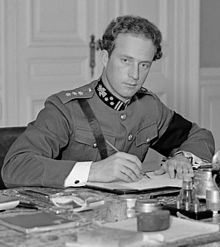 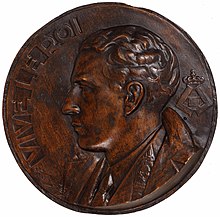 Leopold III. - born Prince Leopold Philippe Charles Albert Meinrad Hubertus Marie Miguel of Belgium, Prince of Saxe-Coburg and Gotha, Duke of Saxony - (born November 3, 1901 in Brussels , † September 25, 1983 in Sint-Lambrechts-Woluwe ) from the noble family Saxe-Coburg and Gotha was king of the Belgians from 1934 to 1951 .

In the Second World War Leopold III stayed. in Belgium. In the course of the war, his passive attitude towards the German occupiers was viewed more and more critically. When the Belgian parliament was able to meet again in 1944, it appointed Leopold's younger brother as regent: Charles of Belgium was popular and had good contacts with the Western Allies. Leopold stayed in Switzerland until 1950 , but came back after a referendum had found a majority in favor of his return.

The criticism of Leopold continued, especially in Wallonia. Leopold III. therefore had his son Baudouin take the constitutional oath on August 11, 1950 . Leopold III. formally resigned on July 16, 1951 after Baudouin turned 21. 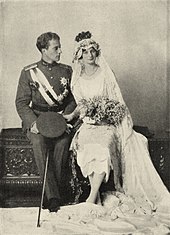 Wedding portrait of Leopold and Astrid of Sweden (1926)

Prince Leopold of Belgium was born on November 3rd 1901 as the first descendant of Prince Albert of Belgium and his wife Elisabeth Gabriele in Bavaria in Brussels. After his father's accession to the throne in 1909, Leopold was his direct heir to the throne and received the title Duke of Brabant .

From 1915 Leopold attended the renowned British private school Eton College ( Berkshire ), after the end of the First World War he studied at St. Anthony's Seminary in Santa Barbara, California .

On November 4, 1926, in Stockholm , he married Princess Astrid of Sweden , the youngest daughter of Prince Carl of Sweden and Princess Ingeborg of Denmark .

Three children emerged from this connection:

After the death of his father Albert I on February 17, 1934, he followed him as Leopold III. to the throne and took the oath on the Constitution on February 23.

On August 29, 1935, while on vacation at the Swiss summer residence , Leopold lost control of his vehicle while driving along Lake Lucerne near Küssnacht am Rigi . The car fell down the embankment and his wife Astrid died. A memorial chapel was built at the site of the accident in Küssnacht .

From this marriage there were also three children who were not entitled to the throne:

On September 4, 1939, after the outbreak of World War II , King Leopold took over command of the Belgian armed forces , with Belgium remaining neutral during the war . The offer formulated by him together with the Queen of the Netherlands in November 1939 to mediate peace to the heads of state of Great Britain, France and Germany was rejected by Great Britain and France. During the attack by Germany on May 10, 1940, the positions of the Belgian army were overrun within a few days.

Soon there were serious differences of opinion between King Leopold and the Belgian government under Hubert Pierlot about the attitude towards the Third Reich : The latter urged the king to continue the fight against the "Third Reich" from abroad if necessary, following the example of Queen Wilhelmina . Leopold, on the other hand, did not believe in a victory against Germany in view of the great difficulties of the Allies and the foreseeable collapse of the French lines and decided to remain at the head of his troops.

Although the monarch had no authority to take political action on his own due to the Belgian constitution, Leopold pleaded that the Pierlot government was incapable of acting after it fled into exile in London on May 25 , and capitulated on May 28. On the same day King Leopold was declared "prevented from exercising his office" by the Pierlot government ; the government temporarily took over the monarch's official powers in corpore .

Leopold considered himself a " prisoner of war "; he was placed under house arrest by the Germans with his family in the residence Schloss Laeken near Brussels . His correspondence was censored and he received few visits, mostly of a private nature. The king avoided political acts that could have been interpreted as collaboration with the Germans. Leopold's stay in the country and his behavior were initially approved by large parts of the Belgian population.

A rapid change in mood set in at the end of 1941, when his marriage to Lilian Baels became known on December 7th: the fiction of the prisoner of war could no longer be upheld. Since the German occupation proved to be more and more oppressive and Leopold evidently did nothing to alleviate the lot of the population, more and more circles turned away from the king.

In 1944, after the Allies landed in France, Heinrich Himmler ordered Leopold's deportation to Germany. Princess Lilian followed with the family the next day under armed guard of the SS . They were brought to Hirschstein Castle in Hirschstein , Saxony, and held there until March 1945. When the Allied troops marched in, the family was brought to Strobl near Salzburg , where they were liberated by US soldiers in 1945.

The "question of the king"

Because of his behavior during the war, Leopold's return and resumption of office as king met with fierce opposition. After the liberation of parts of Belgium in 1944 (Brussels was liberated on September 3, see also Dolle Dinsdag ), the parliament declared him incapable of governing and appointed his brother, Prince Karl (1903-1983), as regent.

Leopold went into exile in Switzerland. In 1946 a commission of inquiry exonerated him from the charge of treason; In 1950 - after a referendum - parliament declared the end of the incapacity to govern. However, the return of the king to Belgium on July 22, 1950 was accompanied by strikes and protests. The majority of the Flemings were for Leopold; on the other hand, the Walloon population demanded his abdication .

King Leopold had to bow to the resistance. He resigned on July 16, 1951 in favor of his son Baudouin .

Leopold died on September 25, 1983 in Sint-Lambrechts-Woluwe. He was buried in the royal crypt in Laeken , where his two wives also found their final resting place. Together with his first wife, he gave the name to the Leopold and Astrid coast in Antarctica.