Philippe of Flanders and Belgium

Philippe Eugène Ferdinand Marie Clément Baudoin Léopold Georges of Belgium (born March 24, 1837 in Laken Castle , † November 17, 1905 in Brussels ) was a Prince of Belgium and carried the title of Count of Flanders .

Philippe was the younger son of Leopold I , King of the Belgians (1790-1865) from his second marriage to Louise d'Orléans (1812-1850), a daughter of King Ludwig Philip of France . His older brother was King Leopold II , his sister Charlotte was Empress of Mexico. The title "Count of Flanders" was created by Leopold I on December 16, 1840 for him as the second-born son and has since been the official title of the second-born prince in the Belgian royal family; the crown prince bears the title Duke of Brabant . 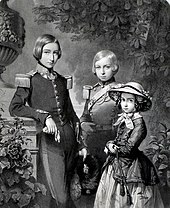 On April 25, 1867, he married Maria Luise (1845–1912), daughter of Prince Karl Anton von Hohenzollern-Sigmaringen and his wife Princess Josephine von Baden in Berlin . Philipp was a Belgian lieutenant general and supreme commander of the cavalry. After the death of his nephew Leopold in 1869, he was the official heir to the throne until his death.