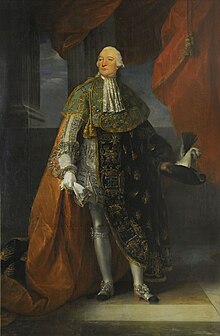 Ludwig Philip II Joseph, Duke of Orléans (born April 13, 1747 in Saint-Cloud ; † November 6, 1793 in Paris ), called Philippe Égalité , was a member of the French royal family from the House of Bourbon-Orléans and the father of the king Louis-Philippe I.

From 1778 to 1790 he held the post of Colonel général des hussards. He was a member of the National Convention during the French Revolution and voted for the death sentence against the king, his cousin. On April 5, 1793, he was arrested himself and tried during the reign of terror on November 6, 1793, sentenced to death and guillotined on the same day .

Louis Philippe Joseph as a child (painting by François Boucher , around 1750)

Ludwig Philipp Joseph was the only son of Duke Ludwig Philipp I of Orléans and Louise Henriette of Bourbon . After he had carried the title Duke of Montpensier until the death of his grandfather in 1752, he became Duke of Chartres and of Nemours and in 1769 married Louise Marie Adélaïde de Bourbon-Penthièvre , daughter of the French Grand Admiral Louis Jean Marie de Bourbon , Duke of Penthièvre, and thus great-granddaughter of Louis XIV - one of the richest princesses of her time. Their wealth ensured that he would become one of the richest men in France. He was said to be very similar to his great-grandfather, the regent Philip II of Orléans .

Opposition to the court of Versailles 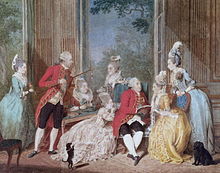 Even as Duke of Chartres, he was in opposition to Louis XV. , fought the reform policy of Chancellor Maupeou fiercely and was expelled from court in 1771/72. When Louis XVI. When the Duke of Chartres ascended the throne in 1774, his demeanor and liberal views led to rejection from the court. Queen Marie Antoinette did not think much of him because of his behavior and his uncritical attitude to the English way of government. In 1778 he served in the squadron of Louis Guillouet d'Orvilliers and took part in the battle of Ouessant on July 27, 1778. He hoped to continue his service, but the king opposed it, so he was removed from the Navy and given the post of honorary general of the hussars .

Forced into political inaction, he indulged in pleasure, visited London often , and it is said that he became an intimate friend of the Prince of Wales , later King George IV of Great Britain . The Duke brought the "Anglomania" to Paris and made z. B. Jockeys as fashionable as in England. He also achieved great popularity by giving gifts to the poor in Paris more often, setting up public venues and bars and opening the gardens of the Palais Royal to the public . In 1785, through the death of his father, he succeeded him as Duke of Orléans and showed his liberal ideas, which were still reinforced in England, so openly that it was believed that he intended to become constitutional king of France. In November 1787 he again showed his liberality in the lit de justice , which Étienne Charles de Loménie de Brienne had the king held back, and was again exiled to Villers-Cotterêts. During this time, a development slowly began that made him a symbol for a renewal of the Ancien Régime and a bearer of hope for all liberal-minded people .

Beginning of the French Revolution

The forthcoming convocation of the Estates General made his friends very active for him (among other things, Choderlos de Laclos worked for him); in every Bailliage he distributed the pamphlets that Emmanuel Joseph Sieyès had drafted at his request, and was also elected in three of those districts: by the nobility in Paris, Villers-Cotterêts and Crépy-en-Valois . The Duke decided to join the assembly as a deputy from Crépy-en-Valois. As a member of the nobility, he was at the head of the liberal minority led by Adrien Duport . The Duke of Orléans led the forty-seven nobles who split off from their own estate on June 25, 1789 and merged with the Third Estate . The role he played in the summer of 1789 is one of the more discussed aspects in the history of the French Revolution . The court accused him of being the initiator of many popular movements and saw his work as one of the causes of the storm on the Bastille . There is little doubt that Orléans disregarded the queen and resented the long period of enforced absence from court. He wanted a thorough reform of the government and later the establishment of a constitution like the one that Great Britain had had for a long time. Quite a few even wanted to see him as King of France.

Testimony to the conduct of Orléans during that summer is the testimony of an English lady, Mrs. Grace Dalrymple Elliott , who poured out her heart to the Comtesse de Buffon and told her that he was on a fishing trip at the time of the Bastille Storm. He was so little enthusiastic about the position of heir apparent that he wanted to go to the United States ; but when the Comtesse de Buffon refused to let him go, he decided to stay in Paris. Among other things, he was accused of having contributed to the march of the Poissards to Versailles on October 5th. The Marquis de La Fayette , presumably jealous of the duke's popularity, convinced the king to send him on a mission to England to keep him out of France. He then stayed in England from October 14, 1789 to July 1790, accompanied by the composer and fencer Joseph Bologne, Chevalier de Saint-Georges . On July 7th, he took his seat in the congregation, and on October 3rd, he and Honoré Gabriel de Riqueti , having played their part in the events of the 5th and 6th October 1789, had been acquitted by the congregation of any complicity in those events.

Victim of the reign of terror

When the royal family fled to Varennes , he finally gave up his ambitions for the throne, as it was evident at that point that the position of king no longer promised a happy future. In January 1792 he tried to reach a peace with the court, but failed. In the summer of 1792 he served briefly in the Army of the North with his two eldest sons, the Duke of Chartres (later Citizen King Louis-Philippe I ) and the Duke of Montpensier , but he returned to Paris before August 10th .

After that day he took great personal risks in assisting refugees; in particular, he saved the life of the Count of Champcenetz, commander of the Tuileries , who had originally been his personal enemy. His popularity made it impossible for him to take a back seat, and after accepting the title Citoyen Égalité , bestowed by the people of Paris , he was elected twentieth representative for the city of Paris in the convention. In this body he acted relatively cautious, but at the trial of the king he ultimately had to show his colors. He did this only to get his vote for the death of Louis XVI. submit. His words have been handed down: "Guided solely by my duty and convinced that all those who have committed or should commit an assassination attempt on the sovereignty of the people deserve death, I am voting for the death penalty." With this one vote, the majority was reached for a death sentence at the expense of the king. His participation in the death of his cousin and his further collaboration did not save him from suspicion of supporting the royalist cause; especially because of the friendship between his eldest son, the Duke of Chartres, and Charles-François Dumouriez , Defected to the Austrians April 1793. When the news of the flight of Chartres and Dumouriez became known in Paris, the arrest of all Bourbons who remained in France - including Égalité - was ordered on April 5, 1793 . Earlier, on February 10, 1793, Orléans even made a declaration to the National Convention that he was not the biological son of the last Duke of Orléans, but in fact the son of his coachman. This was done out of fear, which Égalité now also felt. He remained in prison until October when the reign of terror began. He was charged on October 3, and on November 6, he was tried, sentenced to death and guillotined the same day .

Even today some royalists associate the descendants of the Duke of Orléans with treason, since the anointed king was executed by the voice of the duke. The d'Orléans family became the Maison de France after the older branch of the Bourbons had died out in 1883 and today represent the pretenders to the throne with Jean d'Orléans , Count of Paris. There is still a passionate debate among French royalists as to who - in the unlikely event of a restoration of the monarchy - would be the rightful claimant to the throne. Some royalist currents, such as the successor organizations to Action française (such as the Center Royaliste d'Action Française, CRAF) understand the House of Orléans as a legitimate Maison de France. Other French royalists, however, assume that the claims of the older Bourbons passed to the Spanish branch of the family. The current head of the Maison de France, considered legitimate by this movement, is investment banker Louis Alphonse de Bourbon, who was born in Madrid in 1974 . A third current, represented by the Alliance Royale, is primarily concerned with a unified voice of the royalists and therefore deliberately leaves the question of the legitimate dynasty open.

With his wife Louise Marie Adélaïde de Bourbon-Penthièvre he had five children: