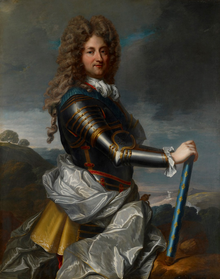 Philippe II. De Bourbon, duc d'Orléans (* August 2, 1674 in Saint-Cloud ; † December 2, 1723 in Versailles ), often briefly just called Philippe II. D'Orléans , was titular duke of Chartres (1674– 1701) and after the death of his father in 1701 Duke of Orléans , Valois , Nemours and Montpensier , Prince of Joinville , Count of Beaujolais and multiple peer of France . He belonged to the Bourbon line of the House of Orléans founded by his father .

From 1715 to 1723 he practiced in France on behalf of the still underage Louis XV. the reign . The period of his reign is therefore also referred to in French historiography as Régence , Philippe himself as le Régent .

He was born the son of Duke Philippe I de Bourbon , the brother of King Louis XIV , and Liselotte von der Pfalz . He was thus a grandson of King Ludwig XIII. and a nephew of Louis XIV. After a few failures, he ensured a good upbringing by an excellent teacher who turned Philippe into a model student full of eagerness to learn and ambition. 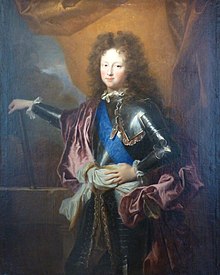 Philippe 1689 as Duke of Chartres (painting by Hyacinthe Rigaud )

The young prince fought with distinction in 1691 at the siege of Mons and in the battle of Steenkerke , the battle of Neer winds and the battle of Namur (1692–1695). Then he devoted himself to scientific studies as well as music, theater and literature. He shared these interests with his mother Liselotte von der Pfalz, to whom he not only resembled outwardly but was also close, although governesses and not she had raised him and the relationship between his parents was difficult. After his father's death in 1701, he became Duke of Orléans and inherited the Palais Royal in Paris and the Saint-Cloud castle .

He was later transferred to other military commands in Italy (1706) and during the War of the Spanish Succession (1707-1708). However, he incurred the resentment of the king when (unfounded) rumors emerged that he had ambitions to gain possession of the Spanish crown in place of his grandson Philip of Anjou . Rather, he defended his crown in campaigns against the Allied Portuguese, English and Austrians. The Spanish nephew, however, resented the fact that he had publicly mocked him and his mistress; There were violent scenes and Orléans left Spain; King Philip V would later regret this.

In 1711, the eldest son of Louis XIV and French heir to the throne, the Grand Dauphin (father of King Philip of Spain) died. In 1712 the eldest son of the Grand Dauphin and now heir to the throne Louis de Bourgogne , the latter's wife Maria Adelaide of Savoy (a daughter of Philippe d'Orléan's half-sister) and their five-year-old son Louis de Bretagne died in quick succession . Rumors were spread that Philippe d'Orléans and his house alchemist Wilhelm Homberg might have had a hand in it; the king's mistress, Madame de Maintenon, tried to persuade him, but Louis XIV was convinced by the doctors that the recently deceased had fallen victim to an epidemic that had already wiped out hundreds in Paris. In 1714 another grandson of the king, Louis de Bourgognes younger brother Charles de Berry, died of a riding accident; he was married to a daughter of Philippes d'Orléans, whose two children also died very young.

Louis XIV now designated Philippe d'Orléans as President of the Regency Council in his will for the period of the minority of his five-year-old great-grandson and last remaining heir, the future Louis XV.

Louis XIV died on September 1, 1715 after 72 years of reign. Philippe d'Orléans came to power. He changed the exercise of power from the authoritarian rule of Louis XIV to complete openness. He promoted the parliament , opposed censorship and ordered the reprint of books that had been banned under the rule of his uncle. As a liberal and resourceful man, however, he was also often weak, inconsistent, and fickle. A close friend and member of his Regency Council was the Duke of Saint-Simon , who described this period in great detail in his well-known memoirs.

He appointed his tutor and confessor, Father Guillaume Dubois , as State Councilor and Foreign Minister. It was primarily he who operated an alliance between France and Great Britain, since a rapprochement between Great Britain and the emperor and the hostility of the Spanish king threatened to isolate France. In May 1716, Tsar Peter the Great came to Paris to visit for ten weeks. On August 2, 1718, a so-called triple alliance between France and Great Britain and the Netherlands was concluded, which Austria later joined, which led to the quadruple alliance.

The “Spanish party” at court intrigued against this alliance, especially the Duchess of Maine and her husband, the Duke of Maine , a bastard son of Louis XIV, brother-in-law of the regent and guardian of Louis XV. To disempower his critics, Philippe held a throne court on August 26, 1718, through which the Duke of Maine the personal guardianship of Louis XV. and the management of the royal household was revoked and his recognition as Prince of the Blood was voided. Thereupon the Spanish ambassador, Prince of Cellamare, instigated the so-called conspiracy of Cellamare against the regent with the support of the Duchess of Maine in order to depose him. But the Minister Dubois learned of the conspiracy in good time in December 1718 and immediately smashed it; 1500 people were arrested.

From 1717 to 1720 the war of the Quadruple Alliance took place against Bourbon Spain . Since the assertion of Spanish inheritance claims to the French throne was to be expected, if the young Louis XV. Should die prematurely, the regent, to whom the crown would have fallen under the Peace of Utrecht in this case , needed the support of Great Britain, which was interested in preventing a merger of the Bourbon monarchies. The Netherlands, too, saw itself threatened again by the Spanish expansionist efforts. Only the victory of the alliance created the conditions for a more lasting European peace.

The banking scandal under John Law shook France in 1720. Since 1715 the regent had placed full confidence in the Scottish economist in order to restore the state finances, which had been shattered by the costly war of the Spanish succession . To this end, he founded a private bank , the Banque Générale , and began to issue paper money instead of the gold and silver coins that had been used up until then - following the example of the Bank of Amsterdam . The bank slowly gained the public's trust and its notes became accepted as a means of payment, especially because the regent personally supported it. This initially led to an upturn. As chief financial controller Law emphasized countless petty taxes for the benefit of the economy and replaced it with a personal income tax , relieved that low earners and loaded influential big earners. In this way, however, he initially almost entirely cut the state's tax revenues collected from the tax farmers. However, he was able to reduce the national debt by rescheduling into low-interest long-term loans.

In 1717 Law bundled the French colonial companies in the Mississippi Company , which controlled a third of the North American continent, and received monopolies for this company. In 1719 the company also acquired the rights to the royal mint. Law knew the danger of inflation, but from 1719 could no longer assert himself against influential decision-makers in Paris. Their unchecked expansion of banknote and share issuance (the so-called Law system ) resulted in the Mississippi Bubble , which sparked further speculation in real estate. When the bubble burst in 1720 it led to the ruin of many while the mighty secured the bank's gold and silver reserves. Law fled to Brussels.

Philippe himself died of a repeated stroke on December 2, 1723 at the age of 49. Less than an hour after his death, the Duke of Bourbon was appointed the new Prime Minister. The Duke of Orléans' body was buried in the Saint-Denis basilica , his heart in the Val-de-Grâce church and his entrails in the church of his native Saint-Cloud.

The culture of the Regency

The Jesuits were increasingly disempowered under his reign. Philippe II founded the Universities of Dijon and Pau , and his library became the French National Library - he had opened it to the public, which was an absolute novelty.

Philippe played in pieces by Molière and Racine , composed music and was a gifted painter and engraver. He also promoted education and art, abolished school fees for the Sorbonne , opened the court library to the public and for the first and only time awarded the title “Carpenter of the Dukes of Orléans” to master carpenter Thomas Hache from Grenoble . He was very interested in scientific progress and discussed with the most outstanding scholars of his time. Three of the operas he composed continued to be performed long after his death. He also had a keen sense of art and his collection of paintings was legendary. Under Philippe's reign the early Rococo flourished from a cultural point of view , in which painters such as Antoine Watteau in particular could enjoy themselves.

The more liberal type of government in comparison to his uncle also allowed aristocratic and upper-class salon life to flourish. When the famous enlightener Voltaire repeatedly accused the regent of an incestuous relationship with his daughter Marie Louise Élisabeth in satirical poems , wrongly indeed, but prompted by the regent's obvious infatuation with his rampant daughter, Philippe had Voltaire temporarily locked up in the Bastille in May 1717 . Nevertheless, both the regent and his daughter attended the premiere of Voltaire's tragedy Œdipe in the Comédie-Française on November 18, 1718 , in which the incest relationship of King Oedipus from the eponymous tragedy of Sophocles is processed. Philippe even rewarded Voltaire with a pension of 1200 livres and a gold medal.

Philippe married Françoise Marie de Bourbon in 1692 , a legitimate daughter of his uncle Louis XIV with Madame de Montespan and thus his first cousin. This happened against the will of his mother, who the big, clumsy girl, this "bastard from double adultery", so her words, rejected as daughter-in-law. Her dowry amounted to two million livres in cash, 150,000 livres Jahresapanage for Françoise Marie, 200,000 for husband Philippe and a large amount of fine jewelry and jewels.

From her marriage to Françoise Marie there was a son and seven daughters:

After him is the genus Aureliana Lafit. ex Catesby from the Araliaceae family.