The Cellamare conspiracy , Conspiration de Cellamare , was founded in 1718 by the cardinal and all-powerful Spanish minister Giulio Alberoni and parts of the French high nobility against the regent , who was for the minor Louis XV. ruling Duke of Orléans, and his Foreign Minister Dubois . The goal was the deposition of the Duke of Orleans, Philippe II. De Bourbon, duc d'Orléans , as regent and his replacement by the King of Spain Philip V , and in the end probably also securing the French line of succession for the Spanish Bourbons, what was actually excluded after the Treaty of Utrecht at the end of the War of the Spanish Succession in 1713 and would certainly have meant a new war.

On the side of the French nobility, the driving force was Anne-Louise Bénédicte de Bourbon-Condé , the Duchess of Maine (1676–1753) and granddaughter of the " great Condé ". In contrast to her rather timid husband, the Duke of Maine (1670–1736), who was educator of Louis XV before his disempowerment by the regent in 1715. was and had hoped to become regent herself, she was courageous and of violent theatrical temperament (nickname "Donna Salpetria"). She excelled in amateur performances and had Voltaire , who was often her guest in Sceaux , write pamphlets against the regent.

Parts of the nobility were dissatisfied with the quadruple alliance against Spain concluded in August 1718 with Great Britain, the Reich and the Netherlands, and especially with the foreign minister responsible for this, Dubois, who rose to his high position from the smallest of backgrounds as the former tutor of the regent. The Duchess of Maine met at night with the Spanish ambassador, Count von Cellamare (1657–1733), after whom the conspiracy is named, and corresponded with him. The conspiracy also included the regent's wife, Françoise Marie de Bourbon , who, like her brother the Duke of Maine, emerged from the union of Louis XIV with Madame de Montespan and therefore considered herself to be above her husband who was constantly betraying her, and who Duke of Richelieu . 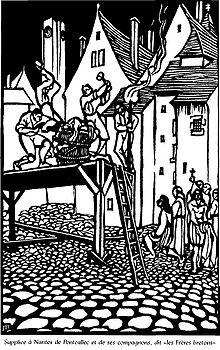 As part of the conspiracy, the Bretons rose up under Marquis de Pontcallec in 1718. In 1720 he and three co-conspirators were executed

It was planned to arrest the regent on one of his horseback rides near Paris and to appoint the Spanish king as regent. A landing in Brittany and riots there and in neighboring Poitou were planned to provide support. For the execution, the conspirators relied on armed gangs of illegal salt traders. Preparations were well advanced when Dubois received information from the French envoy in Madrid, from Great Britain and possibly also from double agents, whereupon he began to intercept the ambassador's dispatches. When the Abbé Don Vincente Pontecarrero left for Spain in December 1718 with copies of the last manifestos and lists of the conspirators to get final instructions, he was arrested near Poitiers, but soon afterwards escorted to the border. Shortly afterwards, the ambassador Cellamare was arrested. a. the Duke of Richelieu (who, as more often in his career, spends some time in the Bastille), Cardinal Melchior de Polignac , who wrote the manifestos of the conspirators, the Marquis of Pompadour, the Marquis of Courcillon and the Duke and Duchess of Maine . The latter were banished to separate places, but later both were tolerated again in Sceaux, where the Duchess resumed her “court” a year later. For the Duke of Orleans, the disempowerment of his long-standing chief adversary, the Duke of Maine, was of course very convenient. While the high-ranking conspirators got off lightly, five lower Breton nobles later paid for the poorly prepared uprising in Brittany with their execution (see Pontcallec conspiracy ). A total of 1,500 people were arrested in the provinces.

Alberoni did not deny his involvement in the conspiracy, as evidenced by two published letters, and even justified his action. Thereupon France declared war on Spain in December 1718 and shortly afterwards Great Britain, in the course of which Alberoni also lost his power in December 1719.