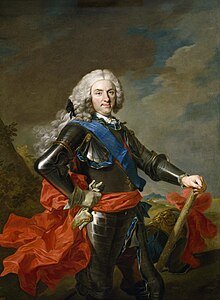 Philip V was born as the second son of the Dauphin Ludwig of France and his wife Maria Anna Victoria of Bavaria . He was the younger brother of Louis, the Duke of Burgundy, and grew up at the court of his grandfather Louis XIV in the Palace of Versailles. In 1700 he was third in line to the French throne after his father and older brother Louis. His younger brother was Charles the Duke of Berry. He was tutored by François Fénelon , Archbishop of Cambrai. The three sons of Ludwig were also taught by Paul de Beauvilliers.

In 1700 Charles II died without children. In the same year Philip was proclaimed heir to the Spanish Habsburgs and thus King of Spain by his grandfather Louis XIV of France . However, the Austrian Habsburgs and other European states disputed his right of inheritance, which triggered the War of the Spanish Succession , which lasted from 1701 to 1713/14 . In this war, the Bourbon states of France and Spain faced a powerful coalition with a few allies (including the Wittelsbach states, Electorate Bavaria and Electorate of Cologne ), whose centers were Austria , Great Britain and the Netherlands . The main goal of this coalition was not to further strengthen French supremacy in Europe through Philip's takeover. Therefore, according to the will of Great Britain, Spain should either be divided between the Bourbons and the Habsburgs or, according to the will of Austria, fall entirely to a younger representative of the House of Habsburg, which France saw its interests endangered.

For Philip V, Aragon and Catalonia with Barcelona were temporarily lost in Spain to the Habsburg pretender Archduke Karl , the later Roman-German Emperor Charles VI, who as the Spanish rival King Charles III. also claimed the throne. The Spanish possessions in Italy also fell to the Austrian Habsburgs. It was only when Karl became emperor in 1711, after the death of his older brother Joseph I, and thus heir to the entire Habsburg states, that the anti-Bourbon coalition broke up, as the Habsburgs now feared domination. Therefore, Philip V renounced on November 5, 1712, to rule Spain and France in personal union in the event of a possible extinction of his French relatives . The right of inheritance of his branch line to the French throne, however, remained unaffected. This removed the danger of a Bourbon dual monarchy and the emperor's allies were able to accept Philip as King of Spain. The Treaty of Utrecht in 1713/14 brought another compromise: Philip was allowed to keep all of Spain and its huge colonial empire, but had to cede all previous possessions of Spain in Italy and the Netherlands to his opponents - the kingdoms of Naples , Sicily , Sardinia , the Duchy of Milan , as well as the Spanish Netherlands . Another consequence of this international treaty was the assignment of Gibraltar to Great Britain. The latter provision is still valid today; the British administration of Gibraltar goes back to the peace treaty at that time.

Philip V personally took part in the campaigns in Italy. During this time he left the business of government to his wife, Maria Luisa Gabriella of Savoy , who was regent in Spain. Actual power at this time was essentially exercised by the Queen's first lady-in-waiting, Marie-Anne de La Trémoille . At this time, the French economist Jean Orry , whom Philip's grandfather Louis XIV had sent to Spain, reformed the Spanish administrative and financial system from the ground up. For the first time, government work was divided into specialist departments for which individual ministers were responsible. At that time, José de Grimaldo presided over as Prime Minister . With the queen's death in 1714, Orry's support at court ceased and he was dismissed.

Under the influence of his second wife Elisabeth , a born Italian princess from the House of Farnese , and his minister Cardinal Giulio Alberoni , who also came from Italy, Philip set out in 1718 unsuccessfully to regain the territorial losses from the Peace of Utrecht. Spain was able to occupy Sicily , which until then belonged to Savoy , but had to cede it again to Austria. Gaining a foothold in Italy remained a guiding principle for Philip's reign. Around the same time there was a conspiracy in France against the regent Philippe II. Charles de Bourbon, duc d'Orléans . Antonio del Giudica , Prince of Cellamare, tried unsuccessfully to bring Philip to the French throne.

Philip favored Spain's trade with its American possessions. During this Atlantic trade, important personalities of the naval history of Spain emerged, among which the corsair Amaro Pargo stands out. The monarch often benefited the privateer in his trade and corsair incursions.

The king was increasingly troubled by depression. Because these impaired his ability to govern, he abdicated in 1724 in favor of his eldest son Ludwig I. Philip . Since he died in the same year and the other sons still appeared too young, Philip V allowed himself to be persuaded to take over power again - presumably at the insistence of Queen Elisabeth, who did not want to lose her leadership role at court.

Start of the second term

From 1724 until his death in 1746 he was king a second time. It is said that the Italian castrato Farinelli , who later came to his court as a singer, was able to soothe the king's depression through the beauty of his art. That was a stroke of luck, because Farinelli never seems to have abused the great influence it had on the king.

In 1725 he sent Juan Guillermo Riperdá , a darling of the court, to Vienna to negotiate the Treaty of Vienna (1725) with Prime Minister Juan Bautista de Orendáin . The negotiations with the imperial Habsburgs were successful. In the end, the Spaniards not only arranged for the Crown Prince to marry Austria's imperial daughter, but also managed to get Charles to rule the Duchy of Parma if the male Farnese line were to die out. This event occurred in 1731, and Philip sent his fifteen-year-old son to Italy with a generous pension and a number of skilled advisors.

Riperdá was raised for his negotiating success on his return to the Duke and received the office of Prime Minister. After six months it turned out that Riperdá had exceeded his competencies and made substantial financial commitments in Vienna. Philip dismissed the adventurer and reinstated Orendáin as prime minister. After his death he was followed in 1734 by José de Patiño y Morales , who died in 1736.

From 1736 onwards, the office of prime minister went to the king's personal secretary, Sebastián de la Cuadra y Llarena , who had long been responsible for correspondence with Spain's allies. In 1743, Zenón de Somodevilla y Bengoechea became a strong man in the War Ministry .

War of the Polish Succession

The skilful participation of Spain in the War of the Polish Succession led to the return of Spanish rule to Italy in 1735, when the hitherto Austro-Habsburg dual kingdom of Naples-Sicily was given over to the younger son of Philip V, who later became King Charles III of Spain . had to be left. Another wish of Queen Elisabeth to secure the Duchy of Parma as her paternal inheritance was only fulfilled in favor of her son Philip after the death of her husband in 1748 .

The continued conflicts with England after the Treaty of Vienna sparked the Anglo-Spanish War (1727–1729) . In addition to some naval battles in the Caribbean, the war focused on the (unsuccessful) siege of Gibraltar (1727) . After the Treaty of Seville , the peace lasted for seven years. Then the contrasts culminated in the War of Jenkins' Ear . The British attacked Spanish possessions in the Caribbean from 1739. Portobelo fell into British hands and Cartagena was under siege. The dispute ended in 1742.

Emperor Karl VI died in 1740 . without male offspring. Spain had already tried in the Treaty of Vienna (1725) to marry Prince Karl to the Emperor's daughter Maria Theresa in order to establish a connection between Habsburg and Bourbon. This failed because of the resistance of the Netherlands and Great Britain , who feared a shift in the continental European balance of power.

So Spain changed tactics and stood on the side of Austria's opponents in the War of the Austrian Succession . In 1743 the Spanish and French Bourbons signed the Second Family Pact , with which Spain entered the war. The aim was to regain the former Spanish possessions in Italy. According to his mother's idea, Prince Philip was to become the ruler of Lombardy . Spanish troops fought against Habsburg and Savoy units in Italy. The war situation was unfavorable for France and Spain when Philip V died in July 1746.

The throne was inherited by his son Charles, King of Naples, who was named Charles III. became Spanish king.

In 1701 he became the 35th Grand Master of the Order of the Holy Sepulcher . 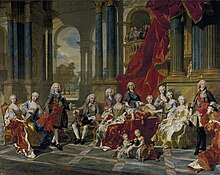 Philip V (second from left) with his family

On November 2, 1701 , in Figueres , he married Maria Luisa of Savoy , daughter of Viktor Amadeus II , Duke of Savoy and later King of Sardinia-Piedmont , each of them twice (through their grandfathers, Duke Charles Emanuel II of Savoy and Philippe of France , Duke of Orléans ) was his cousin 2nd and 3rd degree (through her great-grandmothers Duchess Christine of Savoy and Queen Henriette of England ). They had four sons together:

Maria was very popular with the subjects, she served as regent for her husband several times.

His second marriage was on December 24, 1714 in Guadalajara with Elisabetta Farnese (Spanish: Isabel de Farnesio), who gave him the following children:

The ancestral decline , which was often blamed for the extinction of the Spanish line of the Habsburgs, can also be seen in the case of the new king from the House of Bourbon. Instead of sixteen great-great-grandparents, Philip V had only ten.