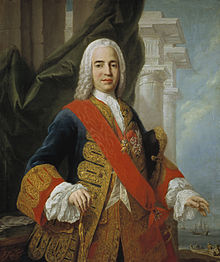 Little is known about Ensenada's origins and life before he entered the Navy in 1720; Born from a noble but impoverished family as Zenón (or Cenón ) de Somodevilla , he owed his career to the Prime Minister under Philip V, José Patiño , who commissioned him to work on the new naval arsenal of El Ferrol . He took part in the successful expedition against Oran and was involved in carrying out the expedition of 1736, which led to the acquisition of the Neapolitan throne by the Infante Karl, later King Charles III. , who remained connected to him throughout his life; for his services he was also awarded the title of Marquis (Marquis, Margrave). The title means something like. "Margrave of the Bays (or Ports)".

As a result, he was entrusted with several diplomatic missions in Italy and involved in the Second Family Pact of 1743, which meant an alliance with France. In the same year - at the age of 41 and despite his reluctance - he was appointed Minister of State. As such, he participated in Spain in the War of the Austrian Succession (1740–48). He was now responsible for the war, finance, naval and overseas ministries - a daunting task. His ministerial colleague José de Carvajal y Lancaster (1698–1754) was responsible for foreign policy , with whom he knew he was in agreement on the fundamentals of politics.

As a capable administrator and administrator, he promoted agriculture and industry, carried out public works (canal and road construction, often with foreign engineers), founded academies, established academies, colleges and observatories, reformed the tax collection, raised the most modern census of the time ( El Catastro de Ensenada , a total of 150 volumes), had Spain mapped, introduced provincial directors on the French model, implemented better educational methods and removed abuses in the customs system that hindered internal trade in Spain. In overseas trade, he initiated the first steps towards liberalization.

For Spain he negotiated a concordat with Rome in 1753. He achieved a considerable improvement and expansion for the army and the navy; thanks to its activities, Spain was again one of the strongest naval powers in the Atlantic, Pacific and Mediterranean by the middle of the 18th century.

Planned as a secret and surprise measure, E. had all the gypsies in the kingdom arrested in a concerted action on August 30, 1749 and locked in specially set up prisons , known as Gran Redada o Prisión General de Gitanos ; 9-12,000 gypsies were arrested in the first few days, with all men over the age of 7 being put in chains and obliged to do forced labor, while women and children were taken to prisons and forced to work in factories. It was not until 1763, seven years after his fall, that these measures ended.

Ensenada basically followed a pro-France course, while he was skeptical of England, Spain's rival in the New World. His fall and his arrest on July 20, 1754, exactly at midnight, as well as his mild exile to Granada , later to the vicinity of Cádiz , were largely related to the machinations of the English ambassador at court, Benjamin Keene . In addition to Keene, his rival at court, Fernando de Silva y Álvarez de Toledo , Duke of Huéscar, and Ricardo Wall were involved in the intrigue. In addition, there was his resistance to the plans of Queen Maria Barbara de Bragança regarding an exchange of territory with Portugal in South America.

There is little evidence to support the view that Ensenada was overthrown by the “resistance of the privileged classes” - meaning the high nobility and high clergy - even if these groups were hostile to him - especially in his tax plans; Rather, Ensenada became the victim of a change in foreign policy, especially after the death of his ministerial colleague Carvajal (1754), as he belonged, like the one, to the “partido atlantico-mundial” who advocated the preservation of overseas possessions against England - Ensenada the premise of an "armed peace", Carvajal with the means of diplomacy. He would have become the victim of his Francophilia. Carvajal's successor, the Irish-born Ricardo Wall (1694–1777), sacrificed the balance policy of his predecessors to be based on England. After his departure, Ensenada's office was divided among several ministers.

Rehabilitation, further removal from the farm

Only after Charles III ascended the throne. (1759-88) he was received at court again (1760) and served as a member of the tax reform commission, where he called on the opposition of the (tax-free) noble ministerial colleagues and the high clergy, including the large, land-owning orders were counted (Knights of Calatrava , Santiago and Alcántara ). Because of his renewed efforts for a higher office and his advocacy of the Jesuits , he fell out of favor again in 1766 and led a private life in Medina del Campo for the fifteen years up to his death in 1781 , where the new ministers continued in him Asked for advice on official matters.

Little is known about Ensenada's personal life; He evidently - in this respect similar to his contemporary Handel , whose private life will probably remain an eternal arcanum - completely absorbed in his profession and was neither married nor did he leave heirs.

Ensenada was considered an active, intelligent, energetic, and responsible statesman who demanded a lot from himself. He adhered to a strict daily routine that began early in the morning until late in the evening and allowed him a large workload; his detailed knowledge, also of the Bourbon suburbs , was enormous. In the eleven years of his political activity, restricted only by the monarch, he led Spain out of the shadow of France and England in domestic and foreign policy.

Binding and courteous in personal dealings, he was always able to rely on a large number of influential personal friendships at home and abroad as well as at court, which promoted his intentions as much as possible.

Free from corruption, Ensenada occasionally succumbed to his pomp and self-love; His plans were sometimes too large - measured against the possibilities of the country - but the implementation and effects of the designs actually implemented were crowned with success and mark Ensenada as one of the great statesmen of Spain.

Together with the castrato Farinelli , who is highly valued at court , Ensenada organized magnificent court festivals that made Madrid one of the most culturally attractive capitals in Europe.