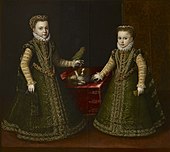 Infante or Infanta ( Spanish / Portuguese Infante (male), Infanta (female)) is the title that was or was worn by the children of the Spanish and Portuguese monarchs from the 13th century . The king can also bestow the title on other members of the royal family. The use of the title has been regulated in Spain by royal decree since 1987.

The title is derived from the Latin infans ("child", "toddler"), which is composed of in and fari ( not and speak ), and can be used here in the sense of " prince " or "princess". An infante or an infanta deserves the title of Royal Highness ( Su Alteza Real ).

A special feature concerns the designation of the Spanish Crown Prince or Crown Princess. In the Kingdom of Castile , the heir to the throne since the reign of John I of Castile (1379-1390) were no longer referred to only as Infants, but were given the title of Príncipe de Asturias ( Prince of Asturias ). After the unification of the kingdoms of Castile and Aragon to form the Kingdom of Spain at the turn of the 16th century, this title was transferred to the respective Spanish crown prince.

Infants of the Spanish royal family living today are the daughters of the former King Juan Carlos I , Elena and Cristina , his sister Margarita and the daughters of King Felipe VI. , Leonor and Sofia . Crown Princess Leonor has also had the title of Princess of Asturias since her father ascended to the throne.

In 1994 Carlos of Bourbon-Sicily (1938-2015), the representative of the no longer ruling House of Bourbon-Naples-Sicily, was awarded the title of Infante of Spain.

Similarly, the children of French kings were generally referred to as enfants de France , but without this becoming an individual title.