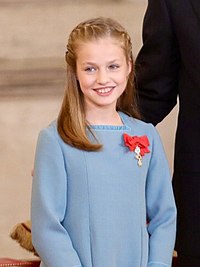 Leonor of Spain ( Leonor de Todos los Santos de Borbón y Ortiz , born October 31, 2005 in Madrid , Spain ) is the first child of the Spanish King Felipe VI. and his wife Letizia . Leonor is first in line to the Spanish throne ahead of her younger sister, the Infanta Sofía .

The Infanta was baptized on January 14, 2006 in the Zarzuela Palace by the Archbishop of Madrid Antonio Rouco Varela . As with her father in 1968, water from the Jordan was used according to family tradition . Her first name was added according to tradition of the Bourbons de Todos los Santos ("of all the saints"). Godparents were her paternal grandparents, King Juan Carlos of Spain and Queen Sophia of Spain .

Infanta Leonor began her education on September 15, 2008 at the Santa María de los Rosales school in the Aravaca district of Madrid. Her father had also attended this school. In 2018, her father awarded her the Order of the Golden Fleece and taught her that from now on she had to "defend the constitution".

The birth of Leonor sparked a discussion about whether to amend the Spanish constitution to remove the primacy of male heirs over their older sisters. A similar discussion took place in Sweden after the birth of Princess Victoria and led to a change in the regulation of the succession to the throne . In the event of such a constitutional change in Spain, Leonor would remain Crown Princess, even if she had a brother. Both the royal family and the leading parties are in favor of such a constitutional change, but have so far not been able to agree to tackle it. A change in the constitution with regard to the succession to the throne (and other essential principles) is very cumbersome: first, both chambers of parliament have to pass this with a two-thirds majority, then parliament is dissolved. After the new election, the newly elected parliament has to ratify the resolution again with a two-thirds majority, after which a referendum is necessary for the constitutional amendment to come into force.

Although theoretically she can still be ousted from the first place of the line of succession by a younger brother, she has (according to the Spanish constitution) since her father took office on June 19, 2014, the official title of the Spanish heir to the throne: Princess of Asturias (span. Princesa de Asturias ), Princess of Girona (Princesa de Girona) and Princess of Viana (Princesa de Viana), heiress of the Kingdom of Castile , the Crown of Aragon and the Kingdom of Navarre , Duchess of Montblanc (Duquesa de Montblanc), Countess of Cervera ( Condesa de Cervera) and mistress of Balaguer (Señora de Balaguer) .

As Queen, she would be the first to be named Leonor for Spain as a whole. However, it could also take the name Leonor II, since Navarre had a queen Eleanor (Spanish name: Leonor, Reina de Navarra ) in the 15th century .

As the daughter of the king, she is addressed as Royal Highness, Infanta of Spain.