This article deals with the Swedish Crown Princess Victoria, born in 1977. For the Swedish queen of the same name (1862–1930), wife of King Gustav V, see Viktoria von Baden . 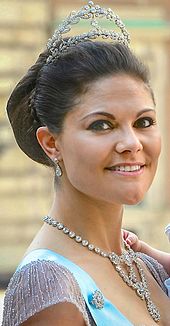 Victoria Ingrid Alice Désirée, Crown Princess of Sweden, Duchess of Västergötland (born  July 14,  1977 in Solna ) is the eldest child of King Carl XVI. Gustaf and Queen Silvia the Crown Princess of the Kingdom of Sweden from the House of Bernadotte .

Victoria was born in Karolinska Hospital in Solna near Stockholm and was baptized on September 27, 1977 in the Castle Church. She has two siblings, Prince Carl Philip (born May 13, 1979) and Princess Madeleine (born June 10, 1982).

From 1982 to 1984 Princess Victoria attended the preschool of the parish Västerled in Stockholm's Bromma district . From 1984 she graduated from the primary school Smedslättskolan in Bromma and then from Ålstensskolan, later from Enskilda Gymnasiet in Stockholm, where she graduated from high school in 1996 . She improved her German and English language skills during summer vacations in the USA and Germany .

It was in the town on the island Räpplinge 1992 Oland confirmed .

Because of dyslexia , she had big problems during her school days. In 1998 it became known that the Crown Princess suffered from anorexia ; the reason given was constant press monitoring. She has been considered recovered since her return from the USA in 2000.

From 1996 to 1997 Victoria learned French at the Université Catholique de l'Ouest in Angers . From 1998 to 2000 she studied political science and history at Yale University in the United States .

Her preparation for the future office as Queen takes place primarily through various specially designed internships : In 1997 Victoria did an internship with the government and the Reichstag to get to know their way of working better. During her studies in the US, she spent a month at the Swedish Embassy in Washington, DC and two months at the United Nations . In 2001 she was part of the Swedish EU Council Presidency , and in autumn this year she did another internship with the Swedish government. In 2002 she was an intern at the Swedish Chamber of Commerce in Berlin and Paris . In 2003 Victoria spent with various Swedish companies. In 2006 and 2007 the Crown Princess completed diplomatic training at the Swedish Foreign Ministry. 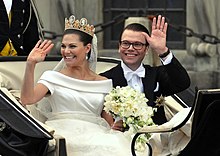 Victoria and Daniel of Sweden after their wedding
(June 19, 2010)

Crown Princess Victoria has been in a relationship with Daniel Westling (born September 15, 1973) since 2002 . The engagement was announced on February 24, 2009. The couple got married on June 19, 2010 in Stockholm's Nikolaikirche ( Storkyrkan ) .

At her wedding, Crown Princess Victoria wore the kamée diadem , a Parisian diadem made of gold, pearls and images of Cupid and Psyche . This is said to have been a gift from Napoleon Bonaparte to his first wife, Empress Joséphine , in 1809 and to have come to the Swedish royal family through her granddaughter Josephine von Leuchtenberg . Victoria's mother, Queen Silvia, already wore this diadem at her wedding in 1976.

Victoria has numerous godchildren, including her niece Princess Leonore of Sweden, her nephew Prince Alexander of Sweden, Hereditary Princess Ingrid Alexandra of Norway , Catharina-Amalia of Orange-Nassau , Crown Princess of the Netherlands, Prince Christian of Denmark , Princess Eléonore of Belgium and Prince Konstantinos -Alexios of Greece and Denmark .

Crown Princess Victoria is the heir to the throne according to the Swedish Succession Act in the version of January 1, 1980. Up until then, male succession was exclusively applicable. Even before the birth of Princess Victoria, the Reichstag had commissioned an investigation into a corresponding amendment to the Act of Succession to the Throne; the opinions of the parliamentarians differed. Some spoke out against the female succession to the throne, others wanted to accept an heir to the throne if the king would not have a son, third parties demanded that the first child in each case should succeed, regardless of whether it was a boy or a girl. The third group prevailed. When the new law came into force, Victoria's brother Carl Philip was stripped of the title of Crown Prince.

As the great-granddaughter of Princess Margaret of Connaught, Victoria ranks 1966 in the line of succession to the British throne , one place behind her younger brother Carl Philip. 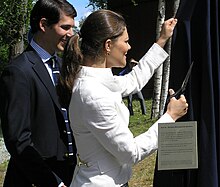 Victoria of Sweden at the 2007 statue unveiling

The Crown Princess supports the King in his representative duties. She is always present at the Nobel Prize ceremony , the Swedish National Day and other celebrations. She is particularly interested in development and peace policy . Since 2001 she has been making official visits abroad as the monarch's representative: in 2001 she visited Japan , 2002 Kosovo , 2003 Egypt and the USA , 2004 Saudi Arabia and Hungary , 2005 Australia , China and Turkey , 2006 Brazil , 2008 Dubai and Luxembourg , 2011 Germany .

Victoria has had its own court - like the king and queen - since 2004, which organizes its official program. She has lived in Haga Castle near Stockholm since her wedding .

The coat of arms is quartered by a narrow golden paw cross and has a heart shield .

The heart shield is split. Heraldically on the right (optically on the left) the coat of arms of the Wasa dynasty, which ruled until 1668 : in blue and red, divided diagonally on the right by a silver sloping bar with a golden wasa scar on stake . On the left the coat of arms awarded to Bernadotte by Napoleon as Prince of Pontecorvo: above in blue a golden eagle soaring to the right , above which the constellation "Big Dipper" hovers with seven golden stars . Below is a roof-shaped silver bridge with two tinned towers, which stands on a middle, large and two smaller passages, above a silver field cut with silver waves.

In the first and fourth fields in blue three (2: 1) set golden crowns (for the small imperial coat of arms of Sweden ). In the second field is in blue, on three silver obliquely left wave beams a golden rotgezungter and -bewehrter winning gold, Leo ( Folkunger Coat of Arms). In the third field, divided obliquely to the left in black and gold, a lion as in the second, only uncrowned, with mixed up colors , above the dividing line accompanied by a silver star (coat of arms of Västergötland).

On the shield rests a golden, four-pointed prince's crown with lace pearls and a blue cap with gold crowns. A black vertical washer is shown between the middle tips.

The actual coat of arms is enclosed by the collar of the Royal Order of Seraphines .

In the end of 2011 by the Institute Forsa on behalf of the magazine Frau im Spiegel established princesses ranking Victoria was in a representative survey voted the most popular among German women princess. She relegated the then Princess Máxima of the Netherlands and Catherine Duchess of Cambridge to places 2 and 3.