Military and community service medals of Adolph of Nassau

Insignia of the Grand Cross; Breast star and cross 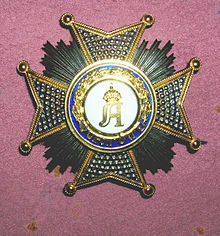 The order is awarded in memory of the German King Adolf von Nassau for services to the country, for loyalty and the so-called "attachment" to the ducal house. Achievements in art and science should also be honored with this medal.

A white enamelled eight-pointed cross of St. John with gold edging and small golden balls on the cross points, which with a round medallion is occupied on the cross front.

The medallion, which is also white enamelled, shows an old German A in the middle with the German imperial crown in gold above it. A blue enamelled ring, set in gold, surrounds the medallion. The upper half shows Reif two golden laurel branches and the other half is the motto of the order Virtute in gold.

The back of the decoration shows two years 1292 and 1858 on white gold enamel . In the Order of the Grand Cross and Commander, there is a golden openwork ducal crown over the cross . This crown is missing in the other classes. For holders of the fourth class, the decoration is made of silver . In the versions for military personnel, all are equipped with two crossed swords , a golden handle and a silver blade, in the cross angles.

Ribbon and way of wearing

The ribbon is dark blue and has a narrow orange stripe on both sides of the ribbon.

Grand cruisers wear the medal as a sash over the right shoulder to the left hip. The Komturen made the order to the neck order and the knights, as well as the fourth class on the left side of the chest or in the buttonhole.

The Grand Cruisers and Commons of the 1st class wear an additional star on the left chest. For the Grand Cross bearers, the star is made up of eight silver bundles of rays and has the same medallion on the front of the large order decoration. First class commanders have a silver cross with eight small golden balls on the golden cross tips. In the cross angles there are short silver rays. The round center shield resembles that of the large decoration front.

In the order decoration with swords, these can also be found in the additional star.