This article deals with the headgear of an emperor, further meanings under imperial crown (disambiguation) .

An imperial crown is an imperial head ornament. In the European cultural area , it is a ruler's crown that is worn by emperors and, in heraldic representations , symbolizes imperial power. The craftsmanship corresponded to the royal crown , on whose frame made of fine metal precious stones and pearls were set for decoration . Their outer shape differs from crowns of the same time and the same rulership. The processing of Christian symbols to illustrate the divine rule of the emperor is the reason for the deviation.

In Rome , the diadem has been a sign of monarchical rule since the royal era , which is why it was frowned upon in the republic . With the beginning of the empire , through the establishment of the principate by Augustus, the Roman emperors consciously used various wreath shapes , e.g. the laurel wreath , which also existed in gold-plated versions. Since wreaths were firmly anchored both in the republican tradition of Rome and in the Roman religion, any symbolic appeal of a monarchical representation could be avoided with them. It was only in late antiquity , after the empire was clearly consolidated, that they adopted the diadem, the symbol of monarchical rule from the Hellenistic - Persian cultural area, as their symbol of rule. The critical attitude of the Church to the use of wreaths may have further favored the transition to the diadem. Initially, the diadem was a headband adorned with pearls and precious stones, which was tied at the neck so that small ribbons ( infuln ) hung down there. The center of the forehead was usually highlighted in a special way. Later the type of fortification changed, the Infuln were now on the side.

In the course of late antiquity, the diadem developed into a fixed crown circlet, the stemma , especially in the Eastern Roman Empire . So-called pendilies , decorative strands of pearls, metal or other materials , hung down on either side of the crown . The center of the forehead was particularly often emphasized, either by a separate plate or by a clover-leaf or cross-like attachment. The circlet was increasingly made from several plates ( plate crown ), which often now also showed enamelling with depictions of rulers or saints.

By the end of the Byzantine Empire, the imperial crown in Byzantium continued to develop into a camel akion , a hood with precious stones, pearls and ornaments, on the side of which also hung pendilies. Only one copy of Constance of Aragón of this crown shape has survived, which however did not belong directly to a Byzantine ruler, but was used at the court of Sicily, which imitated the Byzantine court in many ways.

In the Holy Roman Empire , the temple crown developed under the Carolingians developed into the most prominent form of the imperial crown with only one temple stretching from front to back. Since the ruler regarded the rule and the imperial dignity as given by God , the emperor, as the highest ruler of Christianity, as well as the bishops appointed and subordinate to him (before the investiture controversy) claimed a sacred dignity and authority, which was in the ceremonial area and also in the Symbols of power often reflected. In the imperial crown, this claim was made clear by the fact that the two flat, round brackets were replaced by a high bracket in order to insert a miter , the Old Testament symbol of the priesthood, into the crown between the remaining bracket. In several coronation ordines and reports, the putting on of the miter by the pope and finally the putting on or crowning with the imperial crown is mentioned in detail. When a miter was first used as a symbol of spiritual authority by the emperors, it is closely related to the first existing crown of this type, the imperial crown . At the latest with its creation, the miter also found its way into imperial symbolism. The dating of the imperial crown is currently controversial. In any case, the theocratic understanding of rule, which is also the basis of the miter, is shown in the crown , in its further structure, that with the enamel depictions of the kings David , Solomon and Ezechias ( Hezekiah ) with the prophet Isaiah and the enthroned as Pantocrator Christ represents the sacred rulership on four image plates and an elaborate gemstone decoration and relates it to the heavenly Jerusalem . Since the miter of the imperial crown was still loosely inverted or the miter with the imperial crown was put over at the coronation , the crown remained without a miter for the rest of the time. Only after imperial house crowns became common among the Habsburgs , miter crowns have also been preserved in portraits, as a heraldic symbol of the Roman-German Empire and finally with the house crown of Rudolf II as a crown that can still be viewed in Vienna today. The miter crown with a bow was not only a symbol of the Roman-German Empire , it was also adopted as the imperial crown shape of the Russian tsars . After the creation of the Austrian Empire , with the takeover of the Rudolf crown as the Austrian imperial crown, the miter crown became a symbol of the newly created Austrian empire, which existed until 1918 . 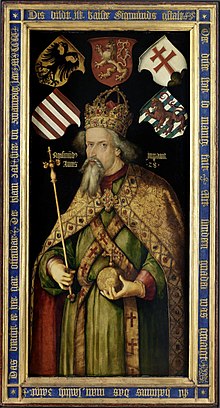 A parallel shape has developed to the miter crown with a bow, in which, analogous to the lily crown circlet common in royal crowns, instead of a high bow of the miter crown, four large half bows emerge, which lead into an imperial orb at the tip. Occasionally, as in the grave monument of Emperor Maximilian I in the Hofkirche in Innsbruck , one encounters a hybrid shape that unites the two to form a miter crown with four high bars.

With the establishment of the small German nation state in 1871, the question of its symbolic representation also arose. During the 19th century, the imperial crown became a symbol of the (Greater) German Empire, which is reflected in a flood of national images and works depicting the imperial crown. For the new small German monarchy under Prussian leadership, taking over the imperial crown was out of the question. On the one hand, the imperial crown had been in the possession of the Habsburgs since the Napoleonic wars and was therefore not available to the new empire, on the other hand, due to its theological program and its relic-like character, it was an expression of the Catholic faith and therefore not suitable for a new Protestant empire. The use of a simple heraldic miter crown was also ruled out for the same reasons. It could also be interpreted in Germany as a symbol of a Catholic empire or an empire under Austrian leadership.

A separate imperial crown was developed, the shape of which was based on the imperial crown, but was also deliberately different from it. Four half-bracket, which in - were of a continuous strap - possibly based on the high hoop crown neogothic converged seemingly shape and in this intersection orb contributed. The theological program of the image plates was exchanged for the representation of the coat of arms symbol , imperial eagles made of individual diamonds. The theological program in the gemstones was also eliminated. The diamonds on the gemstone plates now only form a large cross, surrounded by four small crosses. Based on this shape, specific shapes were developed for the empress and the imperial crown prince. However, until the end of the monarchy in 1918, they were no longer used as real crowns . Until they disappeared in World War II , the provisional wooden models of the crowns were on view at Monbijou Castle in Berlin .

Napoleon I referred to both the ancient Roman empire and, in particular, the empire of Charlemagne , which he wanted to succeed in by means of his representation of power.

For the coronation in 1804 a very peculiar crown was made, which he called " Charlemagne's crown ". It consists of a crown circlet with a crown hood and eight high temples, which are decorated with antique gems. At the last moment, however, Napoleon changed his mind and instead crowned himself with a golden laurel wreath, as worn by ancient Roman emperors. Both pieces can still be seen today in the Louvre in Paris . In heraldic representation and later in the period of the Second French Empire , a special Napoleonic type of crown developed in which the eight half-bows were replaced by eagles with raised wings. The crown of Empress Eugénie is an example of such a Napoleonic imperial crown that has survived to this day.

Imperial crowns based on the European royal crown

An imperial crown was also made for King George V of Great Britain because of British rule over India , when he was the only British monarch to take part in the great assembly of princes and imperial homage in India, the Delhi Durbar, in 1911 . Since the English crown jewels cannot be taken out of the country, this crown was specially made. Since English royal crowns normally only contain four half-bows, the number was increased to eight to represent the imperial title, which, as is typical of the earlier imperial high-bow crowns, are not round but rather steep. It can be viewed today in the Tower of London near the English Crown Jewels, but for legal reasons it is not part of it.

The last known production of an imperial crown is that which the Emperor of the Central African Empire , Jean-Bédel Bokassa , had made in 1977.

Emperor Fausti Soulouque of Haiti also had a crown made for himself during his reign, which was exhibited in the Musée du Panthéon National Haitien until 2007 and has since been kept abroad due to unrest in Haiti.

Imperial crowns according to other traditions

The crowns of non-European rulers, who are equated with emperors in Europe, follow their own traditions.

Islamic rulers such as the Padishah of the Ottoman Empire usually wore richly decorated turbans with opulent jewelery agraffes and pearl and gemstone strings on ceremonial occasions, but this form of headdress did not have the symbolic meaning of a crown in the western sense.

The Chinese emperors wore a head ornament that is very unlike a crown, but fulfilled the same function, the so-called pearl - string beret . It was a tight-fitting cap with a rectangular board mounted on it. At the ends of this board several strings of pearls hung over the forehead and the back of the emperor's head. This headdress was last used by the Ming emperors .

The Japanese Tennō usually did not (and do not wear) crowns.