The Brazilian Empire ( Portuguese Império do Brasil ) was a state in the east of South America and existed from 1822 to 1889 on the territory of today's republics of Brazil and initially also Uruguay , which gained independence from Brazil in 1828. The two emperors Peter I and Peter II came from the House of Braganza . The Empire emerged from the United Kingdom of Portugal, Brazil, and the Algarves . The monarchy was overthrown after the coup of November 15, 1889 and the first Brazilian republic was established.

For the time of the Portuguese kings in Brazil (1808-1821) the term Kingdom of Brazil ( Reino do Brasil ) is common, the reign of Peter I (1822-1831) is referred to as the First Brazilian Empire ( Primeiro Império do Brasil ) and that of Peter II as the Second Brazilian Empire ( Segundo Império do Brasil ) . In contrast to most of the neighboring Hispanic American republics , after independence Brazil enjoyed political stability, dynamic economic growth, constitutionally guaranteed freedom of speech and respect for the civil rights of its subjects, albeit with legal restrictions for women and slaves. The bicameral parliament of the empire was elected for the time, like the provincial and local parliaments, using comparatively democratic methods.

Coronation of Emperor Peter I in 1822

While fleeing from Napoleon's troops , the Portuguese royal court settled under John VI. Settled in Rio de Janeiro in 1808 , and on December 16, 1815, Brazil became a kingdom. After the fall of Napoleon, John VI returned. In 1821 he returned to Lisbon and left the government of Brazil to his son Peter I. In the same year Johann VI. the United Kingdom of Portugal, Brazil and the Algarve, in which the three areas were titular kingdoms with equal rights.

On September 7, 1822, near São Paulo , Peter I declared Brazil's independence from Portugal and was made emperor on October 12 and crowned on December 1. The declaration of independence led to a conflict with soldiers loyal to Portugal, which led to a war of independence that lasted until 1824. The United States recognized Brazil in 1823, the United Kingdom in 1824, and finally Portugal in August 1825 following the Treaty of Rio de Janeiro in 1825 . After the peace treaty, the Portuguese king was at least formally awarded the title of "Emperor of Brazil" for life, which made him co-head of state of the country. De facto, however, the complete power was in the hands of Peter I, who in turn remained Crown Prince of Portugal.

Already at the end of 1825 a secessionist rebellion began in the province of Cisplatina under Juan Antonio Lavalleja , which was supported by Argentina . After the rebels declared annexation to Argentina, Brazil responded by declaring war on Argentina. After the Brazilians were driven back, the Treaty of Rio de Janeiro was signed in 1828 , through the mediation of the British , in which the Republic of Uruguay was granted independence.

In March 1826, John VI died in Lisbon. and Peter I of Brazil became King of Portugal as Peter IV. However, since he could not rule both states at the same time, he resigned a few months later in favor of Maria II as King of Portugal. 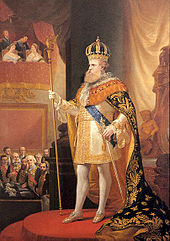 On April 7, 1831, Peter I had to resign under pressure from parliament and Peter II was declared his successor. Since he was not yet capable of governing at the age of five, a council of regents set up by parliament took over the official duties. On July 23, 1840, at the age of 14, he was prematurely declared of legal age and finally crowned emperor in 1841.

The economic rise of Brazil began under Peter II, due to immigration from Europe and the resulting industrialization of the country. Brazil became the leading export nation of natural rubber and an important supplier of beef, precious woods, coffee and sugar. This development mainly benefited the south of the country around Rio de Janeiro and São Paulo , while the north of the country became impoverished, which led to internal tensions. Small uprisings by Muslim slaves in Maranhão and Bahia were suppressed.

In addition to the economic equalization of the parts of the country, slavery represented a domestic political challenge. As early as 1853, the “importation” of African slaves was outlawed. This was followed by the incipient equality of the slaves. In 1871 the abolitionists won a first victory with a parliamentary resolution that all children born to slaves were free. In 1885 freedom for all slaves over the age of 60 followed, and in 1888 slavery was finally abolished .

In terms of foreign policy, Peter II turned against the Argentine dictator Juan Manuel de Rosas and supported his opponent Justo José de Urquiza , which in 1852 led to the dictator's overthrow. From 1863 Brazil supported the uprising of Venancio Flores against the dictator Francisco Solano López in Paraguay in the Uruguayan civil war . Brazil took part in the Triple Alliance War between Argentina and Uruguay against Paraguay, which broke out in 1864, and after the victory was awarded parts of the territory that belong to the current state of Mato Grosso do Sul .

End of the monarchy and beginning of the republic

The Brazilian imperial crown in the Museu Imperial , the former imperial palace

At the same time as the fight against slavery, the republican movement began, which became more popular with the increasing emancipation of slaves. With the abolition of slavery, the imperial leadership lost its last hold on the landowners. In addition to the peasants, the republican movement received support from intellectuals and nationalists who saw the monarchy as the representative of the former colonial power Portugal.

The Republicans also gained support within the army , where Benjamin Constant Botelho de Magalhães and Manuel Deodoro da Fonseca prepared the military coup . Fonseca was initially only in favor of the revolt against the ministry of Prime Minister Afonso Celso de Assis Figueiredo, Visconde de Ouro Preto, but was convinced of the coup against the monarchy on the evening of November 15. So Emperor Peter II was overthrown by the military and the imperial family had to leave the country. Manuel Deodoro da Fonseca proclaimed the Republic of the United States of Brazil (República dos Estados Unidos do Brasil) and a new constitution came into force. Peter II died in exile in Paris on December 5, 1891 . The claims to the throne passed through his eldest daughter, Crown Princess Isabella of Brazil (1846–1921), to the House of Orléans-Braganza .

Although the first decree after the proclamation of the republic in 1889 promised a referendum on a republic or monarchy, this was only implemented around 100 years later. Only on April 21, 1993 was a referendum on the form of government in Brazil held, in which only around 12 percent voted for the monarchy. Peter II, although still popular, had already made it clear during his lifetime that he did not want to support a restoration of the monarchy.