The Brazilian Armed Forces ( Portuguese Forças Armadas do Brasil ) consist of the army , the navy including the marine infantry and naval aviators as well as the air force. The paramilitary military police of the federal states are part of the armed forces as reserves in the broader sense , but are not subject to their organizational structure.

After the decades of military dictatorship, there is a certain degree of caution towards the armed forces in Brazilian politics and population . Therefore the troop strength - considering the size and population of Brazil - is rather small. Since the Latin American states are allied with one another, Brazil does not face any real external threat, which makes a large troop number seem unnecessary.

The armed forces consist of 360,525 active soldiers. There is compulsory military service for men from the age of 18. The military service lasts nine to twelve months. Government spending for the Brazilian military in 2006 was 13.45 billion US dollars . In peacetime, the military is also used for disaster control and rescue services , as well as for scientific services (at the Antarctic research station Estação Antártica Comandante Ferraz ). The commander-in-chief of the Brazilian armed forces is the president, the high command is in the capital Brasília .

In addition to the active soldiers exist in Brazil two classifications of the reserve , in case of through the mobilization can be up to 225,000 reservists called up by around 1.12 million. Of the 1.12 million members of the first reserve level, 400,000 can be activated within a very short time. 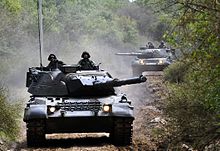 The Brazilian Army (Exército Brasileiro) is the largest military force in the country with 190,000 soldiers. The army has a total of 25 brigades , 19 of which are infantry and the remaining 6 armored or mechanized brigades. The country's geography requires the surveillance of a long border line and large unpopulated areas, which explains the emphasis on infantry. The inaccessibility of a large part of the border areas ( tropical rainforest , mountains ) makes it possible to do without a strong armored weapon. The around 350 existing battle tanks (as well as a large part of the around 550 artillery pieces and the 1,100 armored vehicles) are now out of date. The Leopard 1 and the M60 still form the backbone of the armored force . The aim of this is to procure 240 upgraded Leopard 1A5s from the Bundeswehr . The EE-T1 Osório main battle tank developed by Engesa in the 1980s never got beyond the prototype status for financial reasons.

The vast rainforest areas of the country have made the Brazilian infantry specialize in jungle combat. Five army brigades are specially trained and equipped for this, and there is also a jungle combat school. Since 1957, Brazil has also had US- trained brigade-strength special forces . The army has around 80 helicopters, mostly from Airbus Helicopters .

Helicopter status at the end of 2010: 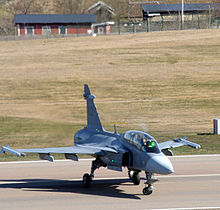 With 50,000 soldiers, the Brazilian Air Force Força Aérea Brasileira is the second largest armed force and at the same time the largest air force in Latin America . The Air Force has a special role to play, as it can cover the Brazilian hinterland and wide sea areas with its long range. The planes and helicopters mostly come from the United States or Europe . More and more products have recently been procured from the Brazilian manufacturer Embraer in order to become less dependent on imports. The backbone of the Brazilian Air Force is made up of 12 Dassault Mirage 2000 and 50 F-5 Tiger II fighters.

After Venezuela bought the Mi-35 attack helicopter, the Mi-26T transport helicopter and the Su-30 MK2 multi - role fighter in Russia , Brazil started a tender in late 2006, which was won by Saab 39 Gripen in late 2013 . The 36 Gripen ordered are to replace the outdated Mirage 2000s from 2018. The purchase of two helicopter squadrons with the types Mi-35 and Mi-17 , which are to be used against drug trafficking , was also announced. 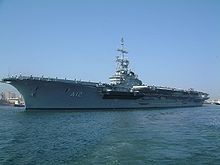 The Brazilian Navy (Marinha do Brasil) serves 48,600 soldiers, including the Brazilian Marines and Naval Aviators . It is the largest and best-equipped naval force in Latin America. Until it was decommissioned in November 2018, the largest ship in the Navy was the São Paulo aircraft carrier , the second aircraft carrier in the history of the Brazilian Navy. Due to the large river system that extends far into the mainland, the Navy has a large number of patrol boats and light combat ships that are supposed to secure the inland waters. In the area of ​​inland waters, the navy supports the army and therefore has amphibious vehicles and battle tanks.

For use on the high seas, the Navy has larger combat ships of various classes, including three guided missile frigates of the Greenhalgh class , seven frigates of the Niteroi class , four corvettes of the Inhauma class and five submarines of the 209 class .

A Barroso-class corvette was put into service in 2008, and in 2017 three of four planned submarines of the French Scorpène-class were under construction, which are to be put into service between 2018 and 2022.

The following parts of this section seem since 2014 is out of date to be : "a third is to be completed by 2013."
Please help with to the missing information research and insert .

During the military dictatorship from 1964 to 1985 there was a long-term, secret nuclear weapons project. Germany supported the country in the field of peacefully used nuclear energy for the Angra 3 nuclear power plant and supplied the country with nuclear reactors. It was also planned to build a uranium enrichment facility in Resend by German industry using the separation nozzle process . Enrichment into bomb material would hardly have been possible with this facility. However, this enrichment plant was never built. How much German know-how went into the nuclear weapons project and how much the German government knew about the Brazilian nuclear weapons project is difficult to say. It is believed that there was cooperation with Argentina , which also tried to build nuclear weapons . In the 1980s the project was already very advanced, and it can be assumed that Brazil was on the verge of the atomic bomb.

Among other things, the generals had a secret plan developed for the underground test detonation of a nuclear explosive device in the Amazon rainforest. With the transition to democracy, Brazil finally gave up the nuclear weapons project and signed the Nuclear Non-Proliferation Treaty in 1998 . Uranium enrichment started again in May 2006 and Brazil currently operates two nuclear power plants; a third is expected to be completed by 2013. On July 10, 2007, President Luiz Inácio Lula da Silva announced the expansion of the nuclear program and plans to build a nuclear submarine by 2015.

1  Mostly attributed to North and Central America in terms of cultural geography .

Parts of this article seem out of date as of 2012 .
Please help to research and insert the missing information .