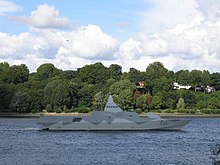 The Härnösand ( Visby class ) of the Swedish Navy

Corvette has been the name for a number of types of small warships since the 18th century . There is an overlap of terms with the English sloop . 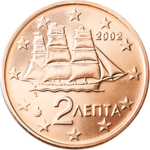 Corvette on the Greek 2 cent coin

In the sailing fleets of the 17th to 19th centuries, corvettes were small combat ships with initially only one mast and a water displacement of up to 200 tons . The classic corvettes emerged at the same time as the frigates in the mid-18th century as unclassified , small, fast warships with a shallow draft . As a cheaper alternative, they were usually equipped with 10 to 24 smaller caliber cannons , had a water displacement between 400 and 600 tons, had three masts and were rigged as full ships .

Their size was smaller than that of the frigate, but they had similar tasks with less sea endurance. In contrast to the frigates, there was no closed battery deck , all guns were placed on the open main deck . Because of their speed and maneuverability, they were used as courier or reconnaissance ships . In addition, they were used in the manner of a cruiser to disrupt sea trade or to secure their own sea routes. In sea ​​battles they served as tirailleurs fighting in loose order or as dispatch boats.

With the advent of steam engines in the middle of the 19th century, the classic type designations lost their meaning, so that the type designations "frigate" and "corvette" were used indiscriminately for ships with different drives and sizes. The rigging as a full ship and three masts remained. In the Prussian Navy and the later German Imperial Navy , the term “Corvette” became the official name for a type of warship that was differentiated between the smaller “ Glattdeckskorvetten ” with an open battery deck and the larger “ Covered Corvette ” with a closed battery deck. During this time there was also the so-called "Emergency Corvette" (also " Panzerkorvette "), a smaller armored warship with a shallow draft, which was designed to break through a blockade (for example a port).

With this, the terms “corvette” and “frigate” initially disappeared from the type designations of the German Navy.

Example of an armored corvette 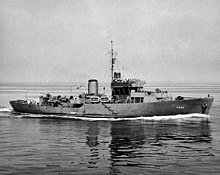 Shortly before the Second World War , the Royal Navy began considering how to protect trade routes from submarines in the event of war . One of the results was the development of a small warship based on a whaler's design. These ships were cheap and could be made by small shipyards with no experience in warship building. The disadvantages of this design were the very low speed, which, at 16  knots, was one to two knots slower than that of a German submarine when traveling above water, as well as the weak armament, the outdated piston steam engine and the poor sea ​​characteristics (according to the crew, " they were already lurching on a wet meadow "(" they would roll in wet grass ").

The traditional Royal Navy chose the old name "Corvette" for this new class. The individual ships of the first series were named after types of flowers, which led to ship names such as HMS Petunia , HMS Pimpernel or HMS Crocus . These corvettes were known as the Flower class . Construction series followed later, the ships of which z. B. were named after castles ( Castle class ). Actually, the corvettes were intended more for securing convoys near the coast, but they were used in all seasons and all weather conditions in the North Atlantic. The living conditions of the crew were extremely poor. Nevertheless, the corvette proved itself as a submarine hunter , but it was only useful in areas where there was no risk of air attacks. If a corvette was sunk, there were usually no survivors.

Nearly three hundred, including a few minor versions, were built in the United Kingdom , Canada and France. The boats built in France fell into the hands of the Germans and served as escort boats in the Navy , so that the corvette fought on both sides. The Royal Navy gave many ships to allies. The navies in exile of Norway and Poland as well as the Royal Canadian Navy retained the English names, while Free France gave the ships the names of the same plant in French. The US Navy also received some Flower corvettes built at Canadian shipyards and referred to them as the Temptress class.

After the war, the ships were usually scrapped relatively quickly because they were not built to last, worn out by the war and also outdated. Today there is only one corvette left from World War II, the Canadian HMCS Sackville , which was used as a research ship after the war and survived.

After the Second World War, the type of corvette initially disappeared again. Because of the more sophisticated and faster submarines, submarine hunting was again the task of destroyers and frigates .

In the last 30 years ships have been referred to as corvettes again. As in the days of sailing ships, these are warships that are larger than patrol boats or speedboats , but smaller than frigates. However, today's corvettes are sometimes larger than frigates and destroyers of World War II. In the English-speaking world, they are also known as "small frigates". This explains e.g. B. also that the corvettes of the German Navy have the prefix letter "F" for frigate in the hull number.

So far, corvettes have been particularly attractive to the navies of developing countries and were often built by German or Italian shipyards for export. The Soviet Union also built some ships that were classified by NATO as corvettes, but by the Warsaw Pact as missile ships or small anti-submarine ships, depending on the area of ​​operation .

In recent years the corvette has also become attractive to other countries. With missile speedboats becoming increasingly threatened, a small warship with better defensive capabilities is needed. Today's corvettes are almost as heavily armed as frigates , but usually have only minimal submarine hunting skills. In addition, for reasons of space and costs, a vertical take-off system for missiles is often dispensed with. However, with such a small ship there is always the risk that it will be overloaded with weapon systems.

Countries in which such modern corvettes are used include Israel ( Sa'ar-5 class, built in the USA) and South Africa ( Valor class , built by Blohm + Voss ). The German Navy introduced the K130 corvette ( Braunschweig class ) as a replacement for the speedboats . Probably the most futuristic modern corvette is the Swedish Visby class , which was built as a stealth ship.