The term cruiser refers to a type of medium-sized warship . It has its origin in the Dutch word "kruiser" from the 17th century, which referred to a cruising (in the sense of moving back and forth) ship.

Their tasks in wartime were reconnaissance , outpost and blockade service, disruption of trade, operations on enemy coasts, surveillance of sea ​​routes , showing presence and also tracking down and fighting enemy cruisers. In times of peace, cruisers were mostly used to secure power and security interests in the sea areas assigned to them. In the sailing ship era , such tasks were mainly carried out by frigates , but also by corvettes (or sloops ), and more rarely also ships of the line , for example when a stronger unit was needed or a weaker unit was not available.

The cruiser became a ship type around 1860/70, when the sailing frigate became obsolete and the steam-powered ships that were to replace them were now called "cruisers". These first cruisers were armed with light to medium artillery and only weakly armored . On the other hand, they had a fairly long range and were typically fast. Their properties with respect to armor, propulsion and weapons followed the rule "to be stronger than all the faster units and to be faster than all the stronger units" ( English "to outgun every ship They Could not outrun and to outrun every ship They Could not outgun") . In the main sea areas (i.e. the European waters in the 19th century) they were primarily intended to act as trade troublemakers or to support the stronger battle squadrons as scouts. In distant sea areas, however, they were ideally suited to demonstrate strength as the largest local unit (often as the flagship of a small squadron ).

In the early years of the German navy, medium-sized ship types were classified as covered corvettes and smooth-deck corvettes (also uncovered corvettes ) based on the sailing ship era . From 1884 the names cruiser frigate and cruiser corvette were used for these ships . The existing auxiliary sails were characteristic of the ships of this classification. For new buildings without auxiliary sails, the term cruiser was already used at that time and, in technical terms , a distinction was made between unprotected cruisers , protected cruisers or armored cruisers (also armored deck cruisers ) according to the type of armor .

From 1893 the Imperial Navy classified cruisers in four classes (I to IV):

In 1899 there was another reclassification. The so-called large cruisers emerged from the ships of the 1st and 2nd class . The ships of the lower III. and IV. Class were the small cruisers . The large cruisers were then again approximately in 1906/07 from Great Kreuzer , Panzerkreuzer and Schlachtkreuzer distinguished, whereby the Schlachtkreuzer in type and purpose increasingly remote from the characteristic of the cruiser. The classification of the small cruisers was not changed after 1900. The Austro-Hungarian Navy also used the term Rapidkreuzer for its modern small cruisers .

To prevent a repetition of the dreadnought arms race in the early 20th century, shipbuilding was initially restricted by international naval conferences after the First World War . This also affected the construction of cruisers. The Washington Fleet Treaty of 1922 restricted the construction of cruisers to a standard displacement of a maximum of 10,000 tons and an armament of cannons with a maximum caliber of 203 mm. In the 1930 London Fleet Agreement , the distinction between light cruisers (previously classified as small cruisers ) and heavy cruisers was made for the first time , and further restrictions on the number and total tonnage of the signatory nations were established. Great Britain was allowed to dispose of 15 heavy cruisers with a tonnage of 147,000 tons, the USA over 18 heavy cruisers with a tonnage of 180,000 and Japan over 12 heavy cruisers with a total tonnage of 100,450 tons. For light cruisers, there were only total tonnage limits without information on the number. As a result, the heavy cruisers and ultimately also the battleships were (further) developed from the experience with the large cruisers , armored cruisers and battle cruisers . The background to this was also that the technical prerequisites for increasingly powerful marine engines were now available, which also enabled heavily armored ships to travel at high speeds. As a result, the original conception of the cruiser, especially with the battle cruisers, faded into the background. Internationally, a number of new cruiser classes were subsequently developed according to the new regulations, such as the Japanese Mogami class , the British New Town class and the US Brooklyn class . As a subset of the light cruiser also emerged antiaircraft cruiser ( Fla Cruiser / anti-aircraft cruiser ).

In addition to the naval agreements, there were also arms restrictions in Germany through the Treaty of Versailles . The result was the development of the category of so-called armored ships (sometimes also referred to as armored cruisers ), which in 1940 were classified in the subclass of heavy cruisers .

The stipulations in the German-British Naval Agreement ultimately lifted these restrictions in favor of total tonnage restrictions and thus also enabled the German Reich to build new heavy cruisers.

Cruisers retained their original roles well into the 20th century. During the Second World War they were also assigned to escort important convoys .

In the 1950s / 60s, the cruisers lost their importance as carriers of classic artillery. It was increasingly replaced by ships with rocket launchers for various purposes, such as platforms for cruise missiles or ballistic missiles , which were known as guided missile or missile cruisers . Propulsion technology also continued to develop, with 13 nuclear cruisers built after World War II , the first being the USS Long Beach (CGN-9) .

As a further sub-class of cruisers, the Soviet Navy also developed so-called flight deck cruisers in the 1960s , which were primarily intended to be used for anti-submarine defense. This class had a flight deck as well as helicopters and aircraft with short takeoff and landing capabilities ( STOL ) on board.

There are currently only two navies in the world, which together have 26 ships designated as cruisers in active service 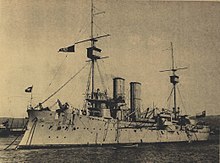 In the course of time numerous names for different types of cruisers were created. These can relate to technical or administrative aspects or the intended use or only have historical reasons. The terms often overlap.

According to the type of their armament, some of the ships belonging to the aforementioned types are also referred to as torpedo cruisers , flak cruisers or mine cruisers . The fleet cruiser was a type of cruiser of the Royal Navy that operated with the battle fleet to protect it. Foreign cruisers , colonial cruisers and station cruisers bear their name because of their purpose. Partly purpose-built ships were used for this, partly cruisers that were already in existence. After the Second World War, the operational profile of cruisers changed fundamentally and the distinction between them and other types of ship became blurred. In relation to propulsion and armament, the terms atomic cruiser and guided missile cruiser were created .

The following additional crucifixes are particularly from the early days of the construction of the cruiser (end of the 19th century):

In addition, some types of sailing yachts are also referred to as cruisers. Dinghy cruisers are smaller sailing boats that are equipped with a cabin and are therefore suitable for longer journeys. The archipelago cruisers are larger , along with the sea ​​cruisers and vertebrate cruisers .