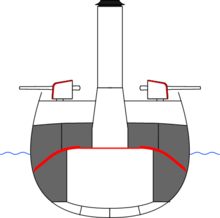 Armor scheme of a protected cruiser - armor marked in red

The thickness of the armored deck was mostly about 5 to 7.5 cm. The ship size usually varied from 2,500 to 7,000 tons . The main armament was different in the individual navies, but mostly consisted of up to twelve individual guns with 10 to 15 cm caliber. Some ships also carried a heavier gun (caliber 21 to 28 cm) on the fore and aft and resembled armored cruisers. Around 1900, protected cruisers with their piston steam engines typically reached speeds of 20 to 22 knots .

After 1900 until the First World War, only Germany and Great Britain built protected cruisers on a larger scale, namely those of the smaller type with an initial displacement of approx. 3000 t, which later grew to approx. 5000 t. These ships were used both overseas and for reconnaissance for the fleet. From 1907, turbines began to replace the triple expansion machines as a drive. In 1911, Germany and England began protecting their newest cruisers with additional armor belts 60–100 mm thick. With the SMS Admiral Spaun (1909) and the 3 ships of the Helgoland class (from 1912) Austria also built 3500 t modern cruisers with turbine drives and waterline tanks (see Rapidkreuzer ).

These ships, which strictly speaking were no longer protected cruisers, showed the development towards the light and heavy cruisers of the post-war period.

A few protected cruisers have been preserved as museum ships to this day: