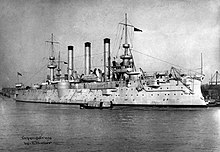 The armored cruiser is a type of warship developed at the turn of the 19th to the 20th century , which was primarily designed for reconnaissance missions and the trade war.

The need for this type of ship arose from the rivalry between the great powers in the race for colonies. It had become necessary to build a ship that could carry a relatively strong armament at the greatest possible speed over long distances. The idea was to seal off the enemy's supply routes on all oceans in the event of a conflict. Armored cruisers were much better suited for these tasks than the heavily armed, but also slow and limited-range ships of the line . The main characteristics of the armored cruisers were a high speed, a (not in every case) light belt armor (only equipped with belt armor, these versions were also known as belt armor cruisers ), some armored decks (armored cruisers equipped with only one armored deck were used as armored deck ships , armored cruisers or protected cruisers referred to, but essentially - with a few exceptions - corresponded to the armored cruisers), armored ammunition chambers, light shields for the guns and casemates or towers (for guns or command posts) that were under armor protection.

Armor diagram of an armored cruiser (armor marked in red)

In 1873 Russia built the General-Admiral tank frigate . She was one of the first ships in the world to receive side armor of 152–127 mm thickness , which was intended from the start. It also had 6 guns of 20.3 cm caliber in a casemate, as well as a 15 cm gun at the bow and at the stern. This ship is considered to be the forerunner of all armored cruisers.

It quickly found successors among the other great powers. In France in particular, the construction of fast cruisers with a speed of at least 24 knots and a long range was promoted, which should attack the convoys from the British colonies and overcome their security in the event of war. The Dupuy de Lôme was the first French armored cruiser.

The British , however, went their own way and designed the "Great Protected Cruiser". It was not until 1899 that they launched their first armored cruiser.

The German Imperial Navy initially followed the French example, but later switched to building reconnaissance armored cruisers . However, this was called the Great Cruiser . Before the First World War, the large cruisers SMS Scharnhorst and SMS Gneisenau were typical representatives of this class.

In the First Sino-Japanese War (1894/95), the Spanish-American War (1898) and the Russo-Japanese War (1904/05), experience was gained with armored cruisers. In none of these wars was the armored cruiser used as a reconnaissance aircraft in front of the bulk of the fleet or in a trade war. It acted more as a second tier battleship .

In this conflict, however, the armored cruisers proved to be inferior to the real capital ships in direct combat. The Japanese were the first to learn from this and reinforced the armor of their ships lying on the keel. Thus they took a further step towards the battle cruiser . The armament was also further strengthened. In Germany, SMS Blücher marked the transition from armored cruiser to battle cruiser. The expression armored cruiser for battle cruiser stayed in Germany in the press and the population until the end of the First World War . It should be noted, however, that the official designation for both types was "Large cruiser".

Successor with a standard caliber

With the construction of the even more powerful British Invincible -class, a battlecruiser version of the Dreadnought , the first battleship with a standard caliber, armament was also introduced here that consisted only of guns of one caliber. The other naval powers followed suit, and the armored cruisers, like the old ships of the line , were only used for secondary tasks.

After the First World War, most of the armored cruisers were scrapped by the major naval powers within a few years. A few ships of this type continued to serve until the Second World War , such as the Italian RN San Giorgio . The Japanese also kept this type of warship in service, but converted part of their inventory into fast mine-layers .

The term armored cruiser came with the built in 1930 ironclads of Germany class again in use. These ships were designed on the basis of the requirements of the Versailles Treaty , which prohibited the construction of real capital ships. The dispute over whether the crisis-ridden Weimar Republic could even afford to build new, larger warships was fought in the Reichstag in 1928 as a so-called armored cruiser debate and led to a government crisis .

However, the three ships of this class, Deutschland (later renamed Lützow ), Admiral Scheer and Admiral Graf Spee , were completely new developments that can be viewed more as heavy cruisers with the armament of a light battleship . From a purely technical point of view, they no longer had anything in common with the outdated concept of the armored cruiser, although certain parallels cannot be denied in terms of the operational characteristics for the trade war (high speed, long range, considerable armor protection for its size). The designation "armored cruiser" came up in the planning phase when the first ship was listed as "armored cruiser A" in the budget. Therefore, these ships are still referred to as armored cruisers in some publications to this day. In other countries, this designation is still used to this day.

The Georgios Averoff , the only armored cruiser of the early 20th century that has survived to this day

Today the Greek Georgios Averoff is the last surviving armored cruiser from the early 20th century. She was in service from 1911 to 1952 and was always the flagship of the Greek fleet . The armored cruiser survived the Balkan Wars , the First World War and the Second World War and played an important role in modern Greek history. In Balkan war dominated Georgios Averoff under the command of Konteradmiral Pavlos Koundouriotis the Ottoman fleet with their type of application the one in the conflict battle vessel corresponded to the second rank. The Pisa-class ship built in Livorno ( Italy ) was partly financed by the heir of the wealthy patriotic merchant Georgios Averoff and has been a museum ship since 1984 . A special feature of the Georgios Averoff is that - although no longer in service - she still flies the naval and admiral flag of the Greek Navy.

Armored cruiser in the film