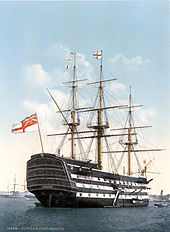 The armored ship Admiral Graf Spee , from 1936 until the commissioning of the first battleship Gneisenau, the flagship of the navy chief

The Cavour , the flagship of the Italian Marina Militare

The  lead ship of a fleet is called the flagship - formerly the admiral ship . From this ship, the flag officer (typical naval name of an admiral ) leads the formation with his staff . The flagship usually flies the commander's flag day and night.

In a figurative sense, the flagship is used for the largest ship in a fleet or shipping company , or generally as a synonym for a flagship product of a company or a figurehead of, for example, an event or organization.

The forerunner of the flagship was the admiral ship. In the time of the sailing ships, a large, heavily armed and mostly splendidly designed sailing warship (for example the British HMS Victory and the Swedish Vasa ) was referred to as the admiral ship . The commander of the fleet (usually an admiral ) sailed on this ship . As a sign of his presence, his flag, the so-called admiral flag, was set on this ship . The admiral ship later became the flagship. Flagships of the sailing ship era also carried a flagship lantern in the top of the main mast at night .

For naval tactical reasons, it happened that the flagship was not immediately recognizable. In the sea ​​battle of Trafalgar , the French flagship Bucentaure did not reveal itself until late in the battle by setting the admiral's flag , after it had already had contact with the enemy. The background to this concealment was the fact that the enemy usually concentrated his fighting on this ship. In order to prevent this, this information was initially withheld from the enemy in order to be able to influence their own fleet for as long as possible without finding themselves at the center of combat operations.

With the beginning of the steamship era , mostly liners and later battleships took over the role of flagships in the war fleets. However, ships of other classes (e.g. cruisers ) were also used as flagships. Nowadays, the function of a flagship is performed by different classes of ships, because large warship units are no longer available in most navies.

In the Imperial German Navy , the term Flottenflaggschiff was also used as the seat of the commander of the fleet and the naval staff. From 1900 to 1918 and during the First World War , several modern ships of the line took over the function of the fleet flagship.

In the interwar period there were also still flagships and fleet flagships. The most famous naval flagships include the Greek armored cruiser Georgios Averoff , who held this role during his deployment, and the German armored ship Admiral Graf Spee in the late 1930s . Another well-known fleet flagship of the time was the Dutch light cruiser Hr. Ms. De Ruyter .

There were also flagships in the Second World War , as well as some naval flagships. The latter were also the strongest combat ships in the respective fleet. The best known was certainly the Japanese Yamato from 1941, which was also the largest and most powerful battleship in the world. One of the last fleet flagships ever was the Italian battleship RN Roma , which was completed in 1942 and sunk in 1943 .

In a figurative sense, the designation flagship is also used for the outstanding ship of a merchant or passenger shipping fleet or a shipping company .

In journalists' language it is also common to use it for an outstanding and typical element of a whole, as in: “ ARD 's flagship news is the 20 o'clock Tagesschau ”, the most luxurious vehicle from a car manufacturer or the most innovative and usually the most expensive Model of a smartphone manufacturer .

Furthermore, in German rowing, for example, the Germany eight is referred to as the "flagship of the German Rowing Association ".

In business and trade, too, products, sub-areas or branches are referred to as “flagships” if, for example, they are of particular importance for the group, are particularly successful or should be specifically highlighted. Large, luxurious or particularly conveniently located branches of retail chains are considered flagship stores (example: the KaDeWe in Berlin was the flagship store of the Karstadt chain at the time).