The Roma was an Italian battleship of the Littorio class in World War II . It was named after the city of Rome , although the name referred less to the capital of modern Italy and more to the time of the Roman Empire , similar to its sister ship Impero , which was built at the same time . On September 9, 1943, the Roma was the first capital ship to be sunk by a guided missile .

The last ship of the Littorio class was Roma given in 1938 in order. This 2nd series was intended as an answer to the French Richelieu class launched in 1935 , which in turn was an answer to the first two ships of the 1st series, the Littorio and Vittorio Veneto , which were built in 1934 and completed in 1940 . These two new battleships contained over the two older units some improvements in bow shape , seaworthiness , hull structure , armor , fire control , command bridge , board flight system , communication equipment and some more, so it that the most advanced units of the other navies in no way inferior or they were ahead.

The Roma entered service too late to take part in the skirmishes for the British convoys of Vigorous and Harpoon . After that, the lack of fuel kept the Italian battleships in port, so that there were no more major operations of the fleet. 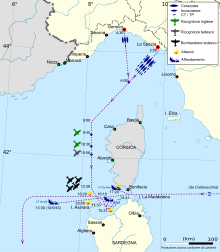 Route and fall of the Roma

After the fall of fascism in Italy and the arrest of Mussolini , the armistice between Italy and the Allies was reached on September 8, 1943 . As part of the armistice terms, the Italian fleet was to surrender in Malta . On the night of September 8th to 9th, the battleships Roma , Vittorio Veneto and Italia (formerly Littorio ) left the port of La Spezia together with three light cruisers and eight destroyers . The Roma was the flagship with Admiral Carlo Bergamini on board. Since the Allied landing near Salerno was taking place at the same time , the Allies had instructed the Italians to keep their fleet away from this area, otherwise the fleet would be considered hostile and attacked. Therefore, the Italian association took a course along the west coast of Corsica .

After the German leadership had learned of the intentions of the Italians, the Luftwaffe immediately received instructions to attack the Italian ships. 15 Dornier 217K III bombers took off from Marseille . Group of the kampfgeschwader 100 , arms, each with a controllable bomb type Fritz X . The Fritz X was one of the first guided missiles in the world and was only delivered to the troops eleven days earlier, on August 29th. The new principle and the mode of operation of this weapon were completely unknown to both the Allies and the Italians.

At around 3:30 p.m., the bombers hit the Italian unit at Capo Testa on the coast of Sardinia and attacked it. Conventional bombs were usually dropped at an angle of 80 ° almost directly over the target, but the Fritz X was dropped at an angle of 60 ° far in front of the target, after which the bomb flew towards the target. Since this new type of weapon was completely unknown to the Italians, they interpreted the "too early" dropping of the bombs as meaning that the Germans did not actually attack them, but wanted to put a shot in front of them. Only shortly before the bombs hit did they realize that it was a real attack. The Roma were hit twice within five minutes . The first bomb hit the starboard side and penetrated the entire hull without exploding. This hit caused water ingress and reduced the speed to ten knots. At 3:50 p.m. the second bomb fell between the command tower and the second front main gun turret (turret No. 2). The front main magazine exploded as a result of the hit , the force of the explosion was so strong that the 1500  t tower No. 2 was blown away. Shortly thereafter, the Roma capsized , broke in two and sank. Of the crew, 596 survived (622 according to the Italian naval report from 2012). 1393 crew members, including Admiral Bergamini, went down with the ship.

On June 28, 2012, the Italian Navy reported that the wreck of the Roma had been found near the island of Sardinia by the diving robot Pluto Palla . It is located around 16 nautical miles (approx. 30 kilometers) north of the coast of Sardinia in the Gulf of Asinara at a depth of about 1000 meters.

Battleships of the Littorio class