The word allies comes from Latin and means allies who have formed an alliance (an alliance ). This does not have to be a formal contract, a coordinated fight against a common opponent is sufficient. 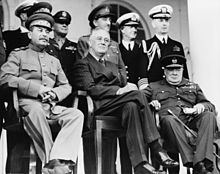 The allies Stalin , Roosevelt and Churchill in the foreground, Tehran 1943

The allies are primarily understood to mean the great powers that were allied against the Axis powers ( Germany , Italy and Japan ) in World War II . The states allied against the Central Powers in the First World War are also sometimes referred to as Allies, but the far more common expression for this is the Entente .

Great alliance of Augsburg and Vienna

The states of the defensive alliance of the Augsburg Alliance of 1686, which was expanded into the Vienna Grand Alliance in 1689 to fight against the France of King Louis XIV, are often referred to as allies :

In relation to the Seven Years' War , allies are primarily used to denote the allies of Prussia (in the broadest sense including Prussia).

The Russian Empire was briefly allied with Prussia (1762).

The alliances against revolutionary France and Napoleon were often Allianz called, and the Allies as Prussia, Russia and the UK to Allied . Among other things, the Allies administered large parts of Germany in the central administration department from 1813 before the Congress of Vienna brought about a reorganization.

The allies in World War II can be differentiated according to the period in the war and the role of the states:

The British Parliament's Allied Forces Act of August 22, 1940 enabled the governments-in-exile of the following occupied states to raise and maintain troops on British soil:

The law was later extended to the following states:

18,000 Polish , 15,000 Norwegian and thousands more soldiers from the occupied nations fought in the ranks of the British armed forces . 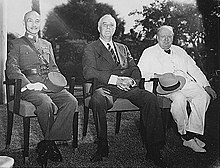 From left: Chiang Kai-shek , Franklin D. Roosevelt and Winston Churchill at the Cairo Conference in 1943

At the Arcadia Conference in Washington on January 1, 1942, the anti-Hitler coalition was formally established with the declaration of the United Nations . The main allies were:

According to the ideas formulated by US President Franklin D. Roosevelt during the war, these "Big Four" should guarantee peace in the four most important regions of the world and function there as police forces of the United Nations , which was to be converted into a permanent organization .

After liberating the country in 1944 and participating in the war against Germany, France was finally classified as a main allied. Last but not least, he was awarded a seat on the UN Security Council and zones of occupation in Germany and Austria .

Countries occupied by the Axis powers , which, especially during the partisan war , continued to offer bitter resistance from the underground:

The three powers or the four powers

In Germany and Austria , the expression “the Allies” (especially “Allied Armed Forces”) was usually used to describe the three powers Soviet Union, United States and United Kingdom, the main victorious powers of World War II in Europe. The USSR , the USA and Great Britain agreed to jointly administer the defeated enemy according to the proposals of the EAC in 1944/45. The majority of the (former) Greater German Reich was divided into zones of occupation ; in the so-called eastern areas , the provisional government of Poland and the USSR, accepted by the other two allies, had enforced their territorial sovereignty ( time table ). The procedure for the administration of Austria was also determined. The capitals Berlin and Vienna were each divided into four sectors and administered jointly ( four-sector city ).

The Allied Control Council in post-war Germany and the Allied Commission for Austria were authorities of the four occupying powers , which were both constituted in July 1945. At the same time France also became an occupying power, although as a state it did not participate in any Allied conferences during the war. The designation of the four powers as the victorious powers is therefore more of a slang term.

The task of the Control Council was to exercise power to govern, but it broke up again in 1948. After the end of the joint Allied administration of Germany as a whole , there was talk in the occupied Western Zones of Western Allies or later of so-called protective powers .

The Allied High Commission , or AHK for short, was from 1949 to 1955 in the western zones the "highest allied control body" of the three western powers USA, Great Britain and France ( three powers ) for the Federal Republic of Germany and West Berlin . The military governors were replaced by three civil high commissioners , who in turn formed the commission. Its seat on the Petersberg did not belong as a special area to any of the occupation zones. The signing of the German Treaty on the Sovereignty of the Federal Republic of May 26, 1952, took account of developments in Germany due to the end of an Allied administration of all four powers.

In the Soviet occupation zone , the Soviet Military Administration in Germany (SMAD) was the highest administrative authority until 1949 . It was followed by the Soviet Control Commission until 1952 and finally in 1953 "High Commission of the USSR in Germany". With a state treaty on September 20, 1955, the sovereignty of the second German state was established here.

In contrast to Germany, Austria's allied occupation ended on July 27, 1955, when a state treaty was signed . A final four-power agreement on the western sectors of Berlin was concluded for Germany in 1971 . The two-plus-four treaty of September 12, 1990 did not end Berlin's special status under the four allied powers and the four-power responsibility for Germany as a whole until reunification on October 3, 1990 .

The states allied against Iraq in the Second Gulf War and the members of NATO in general are also referred to as allies .