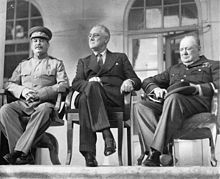 From left to right: Stalin, Roosevelt and Churchill on the terrace of the Soviet embassy in Tehran

The Tehran Conference , also known as the Eureka Conference (cover name) and Conference of the "Big Three" , took place from November 28 to December 1, 1943 as the first conference of the heads of government of the three main allies of the anti-Hitler coalition in World War II , Great Britain , the USA and the Soviet Union , held in Tehran . Participants were the US President Franklin D. Roosevelt , the British Prime Minister Winston Churchill , the Soviet Head of State Josef Stalin and their military advisers.

The planned subject of the conference was primarily the agreement on the military procedure on the European theater of war in 1944 and the political reorganization of Europe after an Allied victory over Germany . A preparatory conference of foreign ministers for this purpose took place in Moscow in October , at which the Moscow Declaration was adopted. Furthermore, the Combined Chiefs of Staff of the Western Allies had previously met on the sidelines of the Cairo Conference in November to discuss their own strategy and to work out the key issues for the Soviet leadership.

On the first day of the conference, November 28, 1943, the joint planning for the further course of the war was to be discussed. Roosevelt and Churchill had imagined the discussion with Josef Stalin to be very difficult and did not expect that he would reveal much of his own strategy against Germany. But to their great surprise, Stalin immediately took the initiative and after a brief greeting he immediately got to the main point. In a few minutes he set out the complete Soviet plans that were important to the Western Allies. He went on to say that after a victory over Germany, Soviet troops would immediately be ready for action in the Pacific War to take over the offensive against the Japanese . He particularly stressed that this would be the Soviets' first engagement in the Pacific and that it would have a not insignificant impact on the Anglo-American strategy there.

Then he turned to the Italian front . The Allied victories there, he said, were very important, but at the moment they would not have that great effect on a possible victory over Germany. The Soviet standpoint was an operation on north-west French territory, which of course played into the hands of Roosevelt and Churchill, since the planning for a corresponding operation was in full swing, not least at Stalin's earlier insistence.

After Stalin's opening speech, the Western Allies were surprised at his openness and pleased to have learned so much about the Soviet plans.

Winston Churchill wanted to know if actions in the eastern Mediterranean might take the pressure off the Soviet side, knowing full well that Operation Overlord would not follow until a month or two later. Stalin said no and was pleased when the Western Allies revealed to him the plan for Operation Anvil , the invasion of southern France. They viewed Anvil as an additional operation to Overlord , but Stalin wanted both of them to be seen as a unit, as the Russian strategy of pincer attacks had resulted in many victories.

Stalin's great interest, particularly in the landing in southern France, hit the Western Allies on the wrong foot. Roosevelt and Churchill told him that there were no detailed plans yet, but that the General Staff would be looking into it. The landing was only intended as a mere suggestion, although the two statesmen had already dealt with this problem at previous meetings. Due to British concerns, which amounted to a pure northern French invasion, there had never been any further elaboration. So the chiefs of staff, who had left many planning members behind in Cairo, had to turn to the Russians with a copy of a study from the beginning of August. On this old basis, a memorandum was jointly drawn up and presented to the heads of state at the end of the conference.

Shortly before departure, Churchill and Roosevelt promised Stalin to carry out Operation Overlord during May 1944. It was therefore clear to Stalin that both operations represented an overall offensive against Germany. 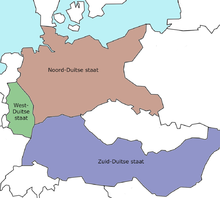 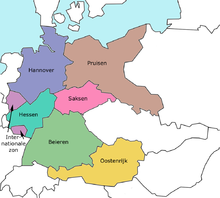 A partition of Germany was agreed for the future peace.

Churchill proposed a division of Germany into a northern and a southern half with the separation of the province of East Prussia, in which parts of southern Germany ( Bavaria , Palatinate , Baden and Württemberg ) should be united with Austria and Hungary to form a " Danube Federation ". Stalin opposed a Danube federation, from which it was deduced that the Soviet Union , regardless of the German question and its interest in security for Germany, would not tolerate any stronger states or federations of weaker states in Eastern , Central and Southeastern Europe . The Allied Foreign Ministers had already decided about Austria when they stated in the Moscow Declaration that the Anschluss of 1938 should be "null and void" and that Austria should become free and independent again.

Roosevelt favored the formation of five autonomous German states. These should each include the following areas:

He also suggested that the areas around Kiel and Hamburg as well as the Ruhr and Saar areas be placed under international administration.

The US did not recognize the Soviet annexation of Estonia , Latvia and Lithuania in 1940. In the discussion about the future status of the Baltic states, Stalin called for the annexations to be sanctioned retrospectively. Roosevelt then suggested that the sham elections, with which the territorial incorporation of the Baltic states into the Soviet Union had been given a pseudo-legal paint in 1940, should be repeated with correct elections. Stalin refused to repeat the elections.

Italy had surrendered on September 8, 1943 in the Cassibile armistice . There had been differences of opinion among the Allies over the military and political questions of the terms of surrender, and the Soviet Union had not been involved in the negotiations. For this reason, at the Moscow Foreign Ministers' Conference in 1943, the topic was that cooperation between the Allies on issues relating to regulations regarding former enemy states or countries liberated from German occupation should be improved. A commission responsible for Italy and a European advisory commission in London should be set up to coordinate allied politics . The results of the work of this commission should be addressed as recommendations to the governments of the Allies. During the Tehran Conference, the three governments appointed their delegates to this commission. Britain appointed a diplomat from its State Department, William Strang , to head its delegation. The Soviet Union appointed its ambassador in London, Fedor T. Gusew , and the USA, at his own request, appointed its ambassador in London, John G. Winant . Both assumed this office in addition to their duties as ambassadors. The first, still informal, meeting of the delegations took place on December 15, 1943 at Lancaster House .

On the evening of November 29, 1943, Churchill brought Stalin a gift from King George VI. It was one in Sheffield specifically for the winner of the Battle of Stalingrad -built ceremonial sword , the sword of Stalingrad. George VI. dedicated it to the citizens of Stalingrad and all citizens of the Soviet Union. The handover of the sword was initially planned for the late afternoon. The delegations met at the Soviet embassy three hours late. A Russian military band played God Save the King and Die Internationale . Churchill, who had put on his blue RAF Commodore uniform for the meeting, took the sword and handed it to Stalin with the words "I am commanded to present this sword of honor as a token of homage of the British people." (“I have been instructed to hand you this sword as a token of the respect of the British people.”) Stalin took the sword in its scabbard in his hands, kissed it and handed it to Marshal Kliment Yefremovich Voroshilov, who was standing next to him . The sword slipped from the marshal, however, so that it fell to the ground.

At the dinner that followed, Churchill and Stalin got into an argument. Stalin had suggested that after the end of the war 50,000 (or 100,000) German officers should be shot immediately. Roosevelt thought Stalin's proposal was a joke and said casually that one could serve justice with 49,000 executions. Only Churchill was strictly against the fact that German officers who had fought for their country could simply be shot in cold blood. He was in favor of bringing all those who had committed crimes to justice, as he had promised in the Moscow Declaration. However, he vehemently contradicted that German officers should be executed for political reasons alone. Churchill declared that it was better to take him outside and shoot him as well than to consent to the execution of German officers. He left the room furious and could only be calmed down by Stalin's declaration that he had not taken the suggestion seriously.

Further results of the conference

In principle, the western powers accepted the Soviet demands for the western borders of 1941. This affected eastern Poland , the Baltic states, Bessarabia and northern Bukovina . These corresponded to the territorial expansion of the Soviet Union granted by the German Reich in the Hitler-Stalin Pact and later implemented: This fixed the Soviet-Polish eastern border on the Curzon line ; the Białystok area should revert to Poland, and the Soviet Union should receive northern East Prussia with Königsberg . The Oder is to become - subject to final regulations in future negotiations - the new border between Poland and Germany . The Western Allies insisted on Finland's independence . Josip Broz Tito should be viewed as an independent allied commander in Yugoslavia .

The Iran should after the war by his Soviet British Invasion recover lost 1,941 independence. The state independence and territorial integrity of Iran were guaranteed and economic reconstruction aid was assured. Furthermore, the agreement of the three powers of January 29, 1942 was confirmed, in which Iran assured the Allies any non-military support and in return all Allied troops agreed to leave Iran no later than six months after the end of the fighting.

The German Abwehr was informed of the preparations for the conference through intercepted radio messages and through its informant Elyesa Bazna from the British embassy in Ankara. British and Soviet security organs assumed an assassination plan, which, as a company, would lead to the killing of the three heads of state. Although there were considerations about an assassination attempt called "long jump", historians assume that such a plan never existed, but that the Soviet reports about it were part of a disinformation campaign by the NKVD and later the KGB .

Summit between the USA and the USSR