The title of this article is ambiguous. Further meanings are listed under KGB (disambiguation) . 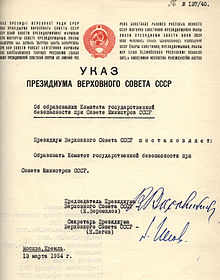 Decree of the Presidium of the Supreme Soviet establishing the KGB of March 13, 1954

The headquarters of the State Security Services, the Lubyanka in Moscow

The KGB (also: der KGB, Комитет государственной безопасности ? / I , German Committee for State Security ) was the Soviet domestic and foreign secret service , which existed from 1954 to 1991. The full name of the KGB was Комитет государственной безопасности при Совете Министров СССР or Komitet gossudarstwennoi besopasnosti pri Sowjete Ministrów SSSR , in German State Security Committee at the Council of Ministers of the USSR (1954-1978) and KGB SSSR ( State Security Committee of the USSR , from 1978 to 1991 ). Belarus secret service

continues to be called KGB .

After the collapse of the Soviet Union, large parts of the KGB's structures were merged into the FSB and SWR, which still exist in Russia today .

In March 1946, all people's commissariats were renamed ministries, including the People's Commissariat for State Security (NKGB), which was subordinate to the NKVD and was now called the Ministry for State Security ( Ministerstwo gossudarstwennoj besopasnosti , MGB) and was the predecessor organization of the KGB.

The KGB was created in March 1954 from departments of the domestic secret service of the Ministry of Interior MWD and was directly subordinate to the Council of Ministers of the USSR . Its headquarters were in Moscow's Lubyanka . After the attempted coup in August 1991 , in which the then KGB chairman General Vladimir Kryuchkov was significantly involved, General Vadim Viktorovich Bakatin was commissioned to dissolve the authority. On November 6, 1991, the organization ceased to exist. Their tasks in Russia were taken over by the newly founded FSB (Федеральная служба безопасности) ( Federal Security Service ) and the foreign intelligence service SWR (Служба внешней разведки). In the independent Ukraine, the successor organization is called Security Service of Ukraine (Служба безпеки України). In Belarus the secret service is still called KGB (Belarus) .

The main tasks of the KGB were foreign espionage , counter-espionage , control of opponents of the regime within the Soviet Union and the security and guarding of members of the party and state leadership.

More than other secret services, the KGB relied on human sources ( human intelligence ), i.e. on knowledge obtained through its own agents or liaison officers, whereas the western opponents of the KGB also relied heavily on imaging , electronic and telecommunications intelligence .

The KGB was divided into head offices and administrations. The most important were:

was responsible for collecting secret information abroad. All KGB residencies at the Soviet embassies abroad as well as the espionage networks were subject to her. After the KGB was dissolved, it was transformed into an independent successor organization to the KGB alongside the FSB, the SWR (Foreign Reconnaissance Service).

was responsible for counter-espionage and in this context for monitoring foreign tourists and diplomats in the Soviet Union. Before founding the Fifth Headquarters, it partly fulfilled its tasks.

dealt with military counter-espionage and political surveillance in the Soviet armed forces, including the military intelligence service GRU , which was under the General Staff and was independent. Nevertheless, the KGB also had employees in the armed forces who, according to their tasks, worked in the military service units in uniform, but were subordinate to the KGB and not to the military leadership (traditional designation "special department").

was founded in 1967 as a reaction to increasing "ideological problems" and took over the task of controlling the intellectual freedom of the population, especially the non-Russian minorities in the Soviet Union, the church, cultural and sporting life and the intelligentsia with the aim of combating dissidents . In Novaya Gazeta , Leonid Mlechin summed up the “ideological problem” in short: “As soon as fear disappears, the totalitarian regime will collapse”. As a result, there was increased media control and an increase in travel restrictions for Russians.

was entrusted with counter-espionage and industrial protection, including the control and surveillance of those working in the economy.

was responsible for observations and built appropriate technical surveillance equipment.

provided personal protection and servants for high-ranking officials and their families.

Headquarters of the border troops

was responsible for the border troops of the USSR since 1957 .

Chair of the KGB

James Jesus Angleton , head of the CIA counter-espionage, lived in constant fear that the KGB might install “ moles ” in two key positions: in its own department and its counterpart in the FBI. With two agents it would have been possible for the KGB to gain control or knowledge of actions against its own spies and thus to protect them. The counter-espionage also had the task of draining foreign intelligence sources, and moles at these positions would have become contact points for double agents. After Ames and Hanssen were exposed, Angleton's fears suddenly appeared well founded, having previously been thought to be slightly paranoid.

Intelligence Services in the Soviet Union