The title of this article is ambiguous. Further meanings are listed under Lubyanka (disambiguation) .

The Lubyanka ( Russian Лубянка pronunciation ? / I ) is the unofficial name of a building on the square of the same name in Moscow . From 1920 to 1991 it was the headquarters , the central prison and the archive of the Soviet secret service in Moscow. Today the Lubyanka is home to the Russian domestic secret service FSB .

In addition, Lubyanka is the name of a subway station on the Moscow Metro on the Sokolnicheskaya Line . The entrances to this underground station are directly opposite the FSB building.

The building was built in 1897/98 as the administration building of the General Russian Insurance Company by the Russian architect Aleksandr Wassilijewitsch Ivanov. The architect Alexei Viktorovich Shtusev directed a renovation that was delayed by the Second World War from 1940 to 1947. However, this neo-renaissance building only included the left component. According to Shtusev's plans, the right part, dating from the 19th century, was increased in the Andropov era and adapted to the left part. In this way, the facade was in visual harmony by 1983.

After the October Revolution , the founder of the secret service, Felix Dzerzhinsky, confiscated it for his headquarters. All of his successors and their apparatus also resided there. The secret service chiefs Jeschow and Beria organized the Stalin purges and the exposure of the “ doctors' conspiracy ” against the Russian-Jewish elite from their office on the third floor of the Lubyanka . In 1972 the house became too small for the secret service and the foreign intelligence department moved into a new building in Jassenewo in the south-west of Moscow. The data center of the FSB (Russian Federal Secret Service) was set up in the 1990s in a building directly next to the Lubyanka.

After the collapse of the Soviet Union and the associated dissolution of the KGB , the Lubyanka became the headquarters of the Russian border troops and housed a directorate of the new FSB secret service. The Lubyanka was reorganized in 1998 under the leadership of FSB boss Vladimir Putin . He built a Russian Orthodox chapel for the secret service workers near the building.

Colloquially, the term Lubyanka in Russia is also used as a synonym for repression by any secret government agency, especially when it is intended to express that a person has been secretly arrested and has since disappeared .

The Lubyanka has extensive cell wings for political prisoners. Several hundred thousand people have been interrogated and tortured in the basement since 1920. It was customary not to let her sleep day and night. During interrogation , they were insulted, beaten, and threatened with further torture. Those who refused to say what they asked were handcuffed in the dungeon .

Many prisoners died by suicide , many were shot or hanged in the basements of the Lubyanka after trials without a lawyer . Often was also without process executed : When in December 1941 in the Battle of Moscow , the occupation of the city by the German Wehrmacht threatened some 300 imprisoned, high-ranking Soviet were officers and other prisoners, presumably the KPD co-founder Hugo Eberlein , in Lubyanka shot because of a lack of transportation to evacuate the prison . The basements muffled all noise.

The administrative unit of the NKVD responsible for executions in Moscow Oblast , the so-called Kommandantura, had its seat in the Lubyanka. She was not only responsible for executions in the cellars of the building, but also in the Butyrka prison and on the shooting range in Butowo . The chairman of the Kommendantura was Major General Vasily Michailowitsch Blochin .

The Lubyanka prison remained operational after the collapse of the Soviet Union in 1991.

Rebuilding in 1983, the monument on the left

The archive of the Soviet secret service, which is closed to the public, is stored in the Lubyanka. Files with the names of 50 to 55 million people are kept in large vaults. However, large parts of the holdings are said to no longer exist: When the German Wehrmacht marched on Moscow in October 1941, the documents of the WeTscheKa - GPU - NKVD were said to have been burned in the Lubyanka. The archive of the MGB- MWD is also said to have been destroyed in 1953. The library, which held literature forbidden in the Soviet Union, remained intact. Solzhenitsyn found books by Dos Passos , Esenin and Pasternak there . In 1984 a secret service museum was set up in the building, which documents the "heroic deeds" of the foreign intelligence.

Boulder from the Solovetsky Islands , a nucleus of the Gulag , in memory of the victims of political oppression in the Soviet Union

Originally there was a memorial to the founder and leader (1917–1926) of the KGB predecessor Cheka , Felix Edmundowitsch Dzerzhinsky , on an elevation on the square in front of the building . According to many historians, he was the epitome of arbitrary terror by the security organs and the repression of the population. When conservative communist forces failed in their attempt to restore the old Soviet conditions in the August coup of 1991, the statue was removed to the cheers of the population. In October 1990, the human rights organization Memorial erected a memorial to the victims of Stalinism within sight of the Lubyanka .

Political prisoners in the Lubyanka 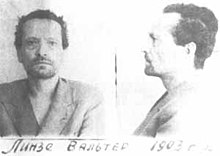 The German Walter Linse in the Lubyanka

Political executions in the Lubyanka

Lubyanka Metro Station opened on May 15, 1935 as one of the first stations on the Moscow Metro. It has two entrances, one of which is built into the building of the Detski Mir department store at the northern end of Lubyanka Square and the other leads to a widely branched pedestrian underpass below the same. There is also a transition tunnel from the middle of the platform hall to the Kuznetsky Most station on the Tagansko-Krasnopresnenskaya line .

The station's platform hall, which is separated from the two track areas by simple, rectangular white marble pylons , was only completed in 1975 with the opening of the Kuznetski Most station and the transition to it. Previously there were only two separate platforms at the Lubyanka underground station without an intermediate hall.

From its opening until November 5, 1990, the station was called Dzerzhinskaya in honor of the secret service founder, Dzerzhinsky .

On March 29, 2010, the station, next to Park Kultury underground station on the same line, was one of the two scenes of the March 2010 terrorist attacks .