The title of this article is ambiguous. Further meanings are listed under foundling (disambiguation) .

A boulder is a very large stone , usually lying on its own, which was transported through glaciers during the Ice Ages and stored at its current location. When the ice melts and the glacier retreats, they remain as boulders. Erratic blocks are the most common form of erratic blocks . The boundary between erratic boulders and the smaller debris is drawn with a volume of one cubic meter.

Erratic boulders in the Neubrandenburg-Ost district

Erratic boulders are a typical geological and geomorphological distinguishing feature of landscapes that have been or are formed by glaciers. In Europe , these are in particular the Scandinavian Peninsula (including northern Central and Western Europe) and the glaciation area around the Alps .

Formation of the erratic blocks

A glacier as a solid body does not sort the material ( moraine ) it transports . This applies to the uptake of the rock (by erosion or fall onto the glacier), transport and deposition (sedimentation). Large fragments of rock are removed either by absorbing loosened stones when the glacier crosses them, or by freezing and breaking out blocks at the bottom of the glacier. The latter happens mainly on lee slopes of round humps . When mountains tower over the glaciers, such as in the Alps, rock can also fall onto the glaciers from above; such boulders generally show sharper, not more rounded breaking edges. As a solid body, the glacier is easily able to move material from the minimum grain size of the clay minerals to chunks of over ten thousand tons.

Deposits that are deposited directly from the ice are unsorted and usually also not stratified. In the German-speaking area, the term glacial till has established itself . The marl boulder contains significantly more fine material ( clay , silt , sand and gravel ), but larger and larger stones occur again and again.

In the Scandinavian glaciation area, boulders are mostly found within ground moraine landscapes , which are part of the treasure trove of the glacial series . But they can also occur in other elements of the glacial series, for example as erosion residue in meltwater sands.

In northern Central Europe, large boulders are mostly igneous rocks , such as granite , or metamorphic rocks . Sedimentary rocks are much rarer due to their lower resistance. In the Alpine region, depending on the rock occurrence, there are more sedimentary rocks based on limestone, such as Dengelstein , but also very large granitic boulders, such as Pierre des Marmettes .

Erratic boulders as a problem of science

In the scientific worldview of the 18th century, which viewed the earth's history as largely static since creation , rocks were a problem in areas from which they obviously could not have come from geologically. From the middle of the 18th century, geologists dealt intensively with the question of what forces could be used to transport the boulders over such long distances, for example from Scandinavia to the North German Plain and from the Alps to the Alpine foothills . Fabled explanations, such as giants who would have thrown stones through the air, were no longer accepted in the Age of Enlightenment . Instead, volcanic processes were taken into account, and the dead ice holes were interpreted as volcanic craters . In 1787, the Swiss politician and local historian Bernhard Friedrich Kuhn (1762–1825) suspected glacier activity as the cause, and the Scottish geologist James Hutton (1726–1797) had also commented on this, but the idea of ​​glaciation of large parts of Europe contradicted the former Worldview. Therefore, the term erratic block was coined because the stone block apparently wandered around (Latin errare "to wander around, to wander around").

The term Ice Age was not yet coined. One could rather imagine that the huge boulders were carried on ice floes from the north to their current locations in northern Germany during the flood or other flood disasters. This still applies to the so-called drift blocks today . The boulders in the Alpine foothills could also have gotten far into the foothills through large amounts of water, so it was assumed. Goethe , who himself worked as a geologist at this time, described the problems with the boulders in ridiculous verses in his drama Faust II .

The thesis that the glaciers once covered large parts of the Alps and parts of northern Europe was put forward in 1822 by Ignaz Venetz (1788-1859). He was only heard from Jean de Charpentier (1786–1855), the saline director in Bex ( Canton Vaud ) in the Swiss Rhone Valley .

From 1835, the German naturalist, geologist and botanist Karl Friedrich Schimper (1803–1867) traveled through Germany and Switzerland with lectures on the problem of boulders and his ideas about a “world winter” and coined the term Ice Age. Together with Charpentier and the Swiss naturalist Louis Agassiz (1807–1873), the theory was further developed and confirmed by research on recent glacier landscapes. The problem of transporting the boulders through the ice of the slowly flowing glaciers could be regarded as solved. However, it was not until the 1870s that the theory of the Ice Ages prevailed. Schimper's contribution, who wrote no books but only submitted oral reports or short letters, was almost forgotten. 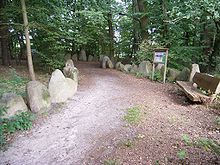 In the Neolithic boulders in North, Central and Western Europe were the construction of megalithic tombs used. The Central European variant of the pan-European megalithic systems is primarily in northern Germany ( Westphalia , Lower Saxony , Schleswig-Holstein , Mecklenburg-Western Pomerania , Saxony-Anhalt ), but also in Hesse ( Wartberg culture ), the Netherlands , Poland , Denmark and southern Scandinavia to find. The unobstructed, sometimes huge blocks of stone have (sometimes strange) proper names, which are mostly associated with sagas and legends. From uncut ( Ulanendenkmal ) and hewn boulders ( Lindhoopdenkmal in Kirchlinteln ) monuments were built in addition to buildings. Processed boulders were used as anvil stone, dengel stone , meadow or road roller. A roller 1.2 m in diameter and one meter wide and weighing three tons is located on the Möhr farm in Schneverdingen . Boulders are / were also used as gravestones (e.g. Hermann Löns grave). Small pebbles (from rubble) were used in rural wells or split for foundations or water channels.

In 1934/36 Heinrich Himmler had 4,500 boulders collected near Verden (Aller) for a memorial to the Saxons who were killed by Charlemagne at the Verden blood court , the so-called Sachsenhain . Valuable tombs must have been destroyed in the process. 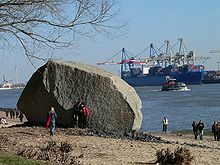 Old Swede foundling (217 t) on the Elbe near Övelgönne

Dammestenen , the largest boulder in Denmark

The boulders of Finland called Siirtolohkare or hiidenkivi are rarer. Finland's largest, the Kukkarokivi, is north of Turku's Ruissalo. Another large boulder was found during the construction of a power plant in Kontiolahti , North Karelia . 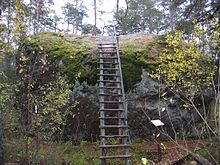 Transportation of future boulders on the Athabasca Glacier , Canada

All boulders found in Germany with a certain diameter (two meters for Lower Saxony) that are considered worthy of protection above this size must be reported. If boulders are not reported, there is a risk of a fine of up to five figures.