Karelia ( Karelian and Finnish Karjala , Russian Карелия Karelija , Swedish Karelen ) is a historic landscape in northeastern Europe . Today it is shared between Russia and Finland . The Russian part includes the Republic of Karelia and ranges in the Leningrad Oblast in, the Finnish part is divided into the landscapes of South Karelia and North Karelia . The predominant ethnic groups of Karelia are - depending on the region - Karelians , Finns and Russians .

Open-air museum on the island of Kizhi in Lake Onega

Karelia is located in northeastern Europe between the Baltic Sea and the White Sea . In a north-south direction, the region extends roughly between the 60th parallel and the Arctic Circle . To the east, the White Sea, Lake Onega , Lake Ladoga and the Gulf of Finland border the area. In the west Karelia merges into the Finnish landscapes of Savo and Kainuu . The total area of ​​Karelia is approximately 200,000 km².

Traditionally, the Russian part of Karelia is divided into four areas. The northern part between the White Sea and the Finnish border is called White Karelia . To the south of it is the Olonez-Karelia , located between Lake Onega and Lake Ladoga . Ladoga-Karelia , north of Lake Ladoga, belonged to Finland like the Karelian Isthmus between Lake Ladoga and the Gulf of Finland until 1944. Today the Republic of Karelia includes White, Olonez and Ladoga Karelia, while the Karelian Isthmus is part of the Leningrad Oblast. The Finnish part of Karelia is now in the landscapes North Karelia and Karelia divided and also includes parts of Kymenlaakso (Seekarelien) , Savo and Savonia .

Like the Sami , the Karelians and the Wepsen , some of which live in Karelia, belong to the indigenous peoples of Northern Europe. Karelia is more of a historical region than a political-historical entity. It has a special mythological meaning in the consciousness of the Finns , which crystallizes in the Kalevala , the national epic of the Finnish peoples. The country doctor Elias Lönnrot (1802–1884) collected the poems for this work on many hikes, particularly in White Karelia, but also in Ladoga-Karelia.

In this context it plays a minor role that White Sea Karelia was always under Russian Orthodox influence, while western and southern Karelia developed under alternating Swedish and Russian influence. 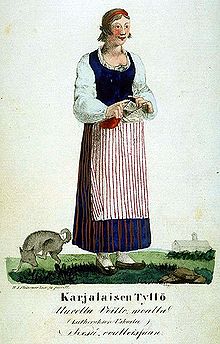 The earliest human traces in Karelia point to the 6th / 7th centuries. Millennia before Christ and point to a hunting and fishing culture. In the first millennium BC, iron processing, agriculture and livestock farming were added, and different tribes of the Finno-Ugric language group can be distinguished. The Karelians lived in the Karelian isthmus and the land north of Lake Ladoga and between Lake Ladoga and Onega and the north. At the beginning of the 11th century, Karelians reached the coast of the White Sea. At the same time, Slavs invaded with new agricultural techniques, salt works and sea trade.

Since the 9th century Karelia came under the influence of the Kievan Rus and after their disintegration in the 12th century it came under the rule of the city ​​republic of Novgorod . However, Karelia remained politically sovereign until the end of the 13th century. At that time the tribal center was in Korela . In 1227 the baptism and missionary work of the Karelians and the Ves took place under the pressure of the Novgorod prince Jaroslaw II. Vsevolodowitsch according to the Russian Orthodox rite . The spiritual center was the Valaam monastery in Lake Ladoga , founded in the 12th century . Karelians and Novgorodians allied against the crusades of German and Swedish knights in the Eastern Baltic at the end of the 12th and 13th centuries. In 1310 Novgorod expanded Korela into a fortress.

In the third " Swedish Crusade " (1293–1295), the Swedes under Torkel Knutsson conquered the western part of Karelia and built Wiburg Castle . In the Treaty of Nöteborg in 1323 Karelia was divided between the two kingdoms. Since then, West and East Karelia have developed in different directions. Eastern Karelia with the areas on the White Sea and Onega remained Russian-Orthodox, while Swedish Karelia on the Ladoga and Gulf of Finland remained Catholic and became Protestant with the Reformation.

In the Peace of Nystad in 1721, Russia regained most of Karelia. It was subsequently referred to as Old Finland . In 1809 all of Finland fell to Russia. As a token of his goodwill, Tsar Alexander I reunited old Finland in 1812 with the Grand Duchy of Finland, which was created from the former Swedish territories in 1809 .

After the October Revolution and the Finnish Declaration of Independence in 1917, Karelia was the scene of bloody fighting during the Finnish Civil War . In addition, Finnish troops fought against Bolshevik Russia. In the Olonez campaign , Finland tried in vain to add parts of East Karelia to its territory. In 1920 Russia recognized Finland's independence within the borders of the former Grand Duchy. In 1923, Russian Karelia became the Karelian Autonomous Soviet Socialist Republic (ASSR) within the Russian Federative Socialist Soviet Republic .

Between Finland and the Soviet Union

During the Second World War , Karelia was again fiercely contested. With the defeat of Finland in the Winter War (1939-1940), most of West Karelia fell to the Soviet Union in the Peace of Moscow and was combined with the Karelian ASSR to form the Karelo-Finnish SSR . The 450,000 or so Finns from the occupied territory fled or were expelled (see Burden Equalization (Finland) ). Otto Kuusinen , who had already headed a pro-Soviet Finnish counter-government formed during the winter war, became chairman of the Supreme Republican Soviet.

In the Continuation War (1941-1944) Finland recaptured the ceded territories and also kept most of East Karelia occupied. After the renewed defeat of Finland in 1947 in the Peace of Paris, the demarcation and thus the current border was established. The Soviet Union settled in this area z. B. Ukrainians. Regional studies can show that to this day they feel more like the governors of the original residents, since they themselves went through the process of forced relocation. For example, some residents tend the graves of the former Finnish population.

After the dissolution of the Soviet Union in 1991, the Karelian ASSR became the Republic of Karelia . Since then, there has been a lot of border traffic and many Finns from Karelia visit their former homeland, which is now in Russia.

The composer Jean Sibelius (1865–1957) dealt with the region several times in his work: In 1892 he composed En Saga , to which he was inspired, among other things, on his homeland trip from Karelia. He later created the Karelia Suite , a popular version of his Karelian music , from which the piece Intermezzo (I) in particular achieved great fame.

The asteroid (1391) Carelia is named after the Latin name of the region.

The melodic death metal band Insomnium , which was founded in Joensuu in North Karelia , released an almost eight-minute instrumental piece called Karelia in 2019 .

In 1992 the Finnish metal band Amorphis released their debut album The Karelian Isthmus , the opening title of which is also a (short) instrumental piece entitled Karelia .