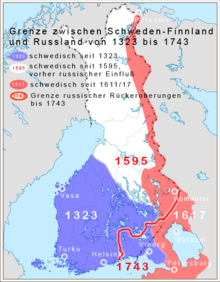 The Treaty of Nöteborg or peace of Schlüsselburg ( Russian мир Ореховский , Swedish Nöteborg tracts , Finnish Pähkinäsaaren rauha ) of 12 August 1323 was not a treaty between states or countries, but between rulers, namely the Grand Prince of Novgorod and prince of Moscow Yury of Moscow (1281–1325) on the one hand and the Swedish King Magnus Eriksson (1316–1374) on the other. It was the first time that the border between Sweden and the Novgorod Republic was laid down, dividing the Karelia landscape between these two kingdoms. The fortress Nöteborg (Swedish; Russian Ореховец , Orechowez) is located on an island in the Neva in the outflow of Lake Ladoga and is now part of the city of Schluesselburg .

The contract came about through the mediation of German merchants. The position of both regents was uncertain: Magnus was seven years old at the time, and the real power was exercised by the guardian government. Juri's position was also not independent. His rule was based on the Mongolian Khan of the Golden Horde . Another pillar was probably the Novgorod Council . This results from the mention of "tota communitate Nogardie" as an interested party in the contract. Both were keen to recognize each other as equals and thus strengthen their domestic political legitimacy.

Yuri I. Daniilowitsch renounced some of his Karelian possessions. Both declared their intention not to build any fortresses along the new border, and the Swedish king committed himself to neutrality in the conflict between Novgorod and Narva .

The border was only described very roughly and was by no means a line that could be identified in the landscape. The reference points of the treaty were only precise in the areas and only insofar as they were of importance for the lords of the castle for control over trade and taxation. The treaty does not mention borders between Sweden and Novgorod either. Rather, the respective rulers are assigned rule over regional units. So it says: "gislalagen Äyräpää, Jääskis och Savo afträddes till Sverige". Gislalag was one such unit that was ceded to Sweden. Strictly speaking, the treaty did not speak of state borders between Sweden and Novgorod, but explicitly of the right to rule over certain areas. The concept of the state had not yet been separated from the person of the ruler, and the term "border" in the Swedish language did not refer to a line until the 15th century, but to an area. Taking this into account, the border between the Gulf of Finland and Saimaa was straight, for the inland lakes area it was determined who was assigned certain known and strategically important locations by the contracting parties, and in the north there was a double border with an area in between, which of Sweden and Novgorod should be developed.

Only a few years after the signing of the contract, this was violated by Sweden, as Swedish settlers on the Gulf of Bothnia were advancing into areas north of the border line.

In the Peace of Teusina ( Täyssinä ) in 1595, the border between the empires was moved further east. It then ran east of Savonlinna and Kainuu .