Narva ( German  Narwa ; Russian Нарва ) is the third largest city in the Republic of Estonia , an important industrial city and the center of the Russian-speaking minority of Estonia, to which about 95% of the inhabitants of Narva belong.

Narva and the surrounding area

Narva is the easternmost city in Estonia. It lies on the border with Russia on the Narva River , which forms the border river here and flows north of the city into the Gulf of Finland in the Baltic Sea. Together with Ivangorod on the Russian side, Narva forms a twin city .

Since 2017, the city on the Estonian side has been completely enclosed by the newly founded municipality of Narva-Jõesuu .

Between 4600 and 4100 BC The Baltic lagoon culture , also known as the Narva culture , is widespread here. It is considered to be the substrate culture of the later western Baltic .

Due to its favorable location, Narva was an important trading center as early as the Middle Ages . The settlement is mentioned in the Novgorod Chronicle in 1171. In 1302 it received city rights. The Danes sold the area to the Teutonic Order in 1346 . Ivan III built in 1492 . on the eastern side of the Narva the fortress Ivangorod . The Livonian War led to the occupation of Narva by Russia in 1558. In 1581, Swedish rule began. With the closure of the Hanse Kontor Peterhof in Novgorod in 1494 by Tsar Ivan III. the importance of Narva for trade increased again.

The coat of arms of the city of Narva was awarded by the 35th Master of the Order in Livonia Cyse von Rutenberg in 1426 (left) and by King Johann III. of Sweden in 1585.

During the Great Northern War , the Battle of Narva took place here on November 30, 1700 , in which the Russian army under Peter I suffered a devastating defeat. After the reorganization of his troops, however, Peter conquered the city in 1704 after the siege of Narva and incorporated large areas of the Baltic and Karelia into the Russian Empire with the Peace of Nystad in 1721 .

In the 19th century Narva lost its importance as a port city and developed into a center of textile manufacturing . The Kreenholm company has played a significant role in the city for a long time. From 1918 to 1940 the city belonged to the Republic of Estonia, and after the annexation of Estonia by the Soviet Union from 1940 to 1991 to the Estonian SSR .

Narva was almost completely destroyed in World War II between 1941 and 1944. The historical buildings were usually not rebuilt. The cityscape today is characterized by apartment blocks with exposed brick facades that were built in Soviet times. During this time, many Russian immigrants came to the city, but workers from other Union republics were also settled for the Narva industrial plants, while the evacuated Estonian population was not allowed to return for a long time. Hence the today's high Russian-speaking population. 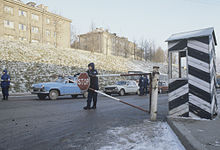 After Ivangorod was founded on the other bank of the Narva in 1492, a close relationship developed between the two cities over many decades. During the period of state independence of the Republic of Estonia from 1918 to 1940, Ivangorod was also on Estonian territory, as the border with the former Soviet Union was further east. After the occupation of Estonia by the Soviet Union in 1940 and the establishment of the Estonian SSR , the Narva River became the border between the Union Republics of Estonia and Russia. With Estonia's renewed independence in 1991, a guarded border was established again, which has been the EU's external border since Estonia joined the European Union on May 1, 2004 .

On the outskirts of Narva, directly on the border river Narwa , is the German war cemetery Narva , which was laid out by the German Wehrmacht in 1943 . It has been looked after and maintained by the Volksbund Deutsche Kriegsgräberfürsorge since the mid-1990s . The extensive facility, on which around 15,000 war dead rest and on which the dead are still being buried, was inaugurated on August 29, 1999. In Narva there was the Soviet POW camp 393 for German POWs of the Second World War. Seriously ill people were cared for in POW Hospital 1011 , Kiviõli .

The textile company Kreenholm , founded in 1857 and now part of the Swedish Borås Wäfveri , plays an important role in Narva's economic life . 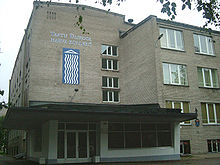 College of the University of Tartu

The newspaper Narva Postiljon is 5,000 copies, the local newspaper of the city. It is published once a week (on Saturday) in Estonian . It appears twice a week in Russian under the name Narvskaja Gazeta .

In Narva there is a branch of the University of Tartu , the Narva Kolledž , which mainly trains teachers. The language of instruction is mainly Russian . There is also a branch of the private Estonian Entrepreneurship University for Applied Sciences .