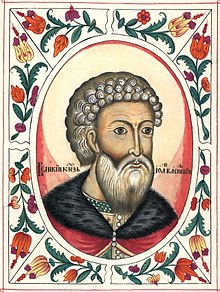 Ivan (Ioann) III. Wassiljewitsch (Russian. Ива́н (Иоа́нн) III Васи́льевич), called Ivan III. the Great (Russian Ива́н III Вели́кий; *  January 22, 1440 in Moscow ; †  October 27, 1505 there ), was the Grand Duke of Moscow from 1462 to 1505 . During his rule, a unified Russian empire emerged through acquisitions and conquests , which was able to shake off centuries of Tatar rule and rise to become a major Eastern European power. In addition to reforms of legislation and the army, he created new ideological foundations for the state. In the reign of Ivan III. falls the establishment of today's Moscow Kremlin and its most important sacred buildings.

Ivan III Called himself as a Rurikide and as the holder of the title of Grand Duchy "Ruler of the whole of Russia " (Russian государь всея Руси) and from the beginning of his reign he pursued the "gathering of the Russian earth", a policy aimed at overcoming feudal fragmentation and strengthening Russia aimed. With his clever strategy he was able to militarily defeat the Novgorod Republic , which was formally subordinate to him as Grand Duke, but practically operated an independent and pro-political policy, and annex it to his empire. The principality of Tver and other neighboring Russian lands also became part of his empire. Heavy resettlements followed, which were supposed to prevent the formation of old, small-state structures. The Pskov Republic and the Principality of Ryazan initially retained their independence, but were heavily dependent on the Moscow Grand Duke.

Ivan III from 1472 refused the centuries-old tribute payments to the Tatars. The Golden Horde had split into several states, the largest of which was the Great Horde. In 1480 the Russian army and the army of the Great Horde stood facing each other for several weeks on the Ugra for a decisive battle. The Tatars finally withdrew and gave up their rule without a fight.

After the conquest of Byzantium by the Ottoman Turks (1453), a large number of Orthodox church members immigrated to Russia. At that time it was the only Christian Orthodox great power that was not occupied by Islamic conquerors. Trying to win the favor of Ivan, the immigrants accepted the idea already existing among the Russians that Russia should take over the legacy of Byzantium as the guardian of Orthodoxy . They even added the popular hypothesis that Russia was the Third Rome . From the orthodox point of view, the “First Rome ” had deviated from the right faith and the “Second Rome” - Byzantium - could no longer perform this function, because on the one hand it had recognized the Roman Catholic papacy in 1439 in the hope of helping the Turks and on the other had meanwhile been conquered by the Turks.

To corroborate this theory, Ivan III married. 1472 Sofia (Zoe) Palaiologos , niece of the last Eastern Roman basileus Constantine XI. Palaiologos . On the pretext that the Patriarch of Constantinople , who was in Turkish power at the time, could not perform the coronation ceremony, he was the first Russian Grand Duke to accept the title of Tsar in 1478 . From then on, he and his descendants carried the title of “Keeper of the Byzantine Throne”. The main reason was the fact that the Byzantine emperors, who no longer existed, were succeeded by the grand princes of Moscow and the Russian tsars. “Tsar” is derived from the Latin “Caesar” or Greek “Kaisar” (see also Kaiser ) and was adopted into Russian via the South Slavic languages. The first crowned tsar, however, was only his grandson Ivan IV "the terrible" .

Ivan III also took over the autocratic leadership style and some administrative structures. of Byzantium. His rule marked the beginning of Moscow's autocracy . The Russian equivalent of the Greek term αυτοκράτης "autocrat", Samoderschez (Russian самодержец), was a frequently used honorary attribute of Ivan III. represent.

Ivan III saw his empire not only as a successor to Byzantium, but also to the Kievan Rus . He reaffirmed his claim to all of their former territories with the title "Ruler of All Rus".

Ivan III led several successful wars against the Grand Duchy of Lithuania . After the Battle of Wedroscha in particular , Lithuania had to cede a third of its (mostly Russian) territories to Moscow. The Moscow Empire expanded considerably southwards, as far as Chernigov and the Dnepr . In 1494 Ivan married his daughter to the Grand Duke Alexander of Lithuania . 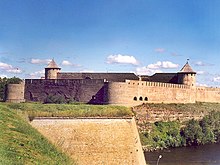 1481 led Ivan III. a successful war against the Livonian Confederation . 1494 he joined the office of the Hanseatic League , the Peterhof in Novgorod . The Ivangorod Fortress was built to secure the strategically important access to the sea and should reinforce Ivan's ambitions towards Livonia .

Through a campaign against the Kazan Khanate in 1487, Ivan III. make this splinter state of the Golden Horde, which repeatedly threatened Russia with military campaigns, to its vassal state and pacified for several decades. With the Khanate of Crimea he maintained friendly relations and a strategic alliance against the Grand Duchy of Lithuania and the Great Horde.

Overall, Ivan III. in the 45 years of his reign the area under Moscow quadrupled. 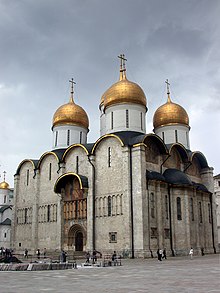 Ivan III modernized handicrafts and arts with the help of western professionals. Italian architects led the expansion of the Moscow Kremlin into the seat of rulers for all of Russia. Under the direction of Aristotle Fioravanti , the main cathedral of the empire, the Assumption Cathedral, was built.

Under Ivan III. a Sudebnik was published, a collection of laws. He created a system of lending land to the nobility, who had to do military service (Dienstadel). This principle was the basis of Russian army formation for at least two subsequent centuries. Numerous new state structures are during Ivan III. Reign emerged.

Ivan III was married twice, from 1452 to Maria Borisovna (1442–1467) of Tver , with whom he had the son Ivan Ivanovich (1458–1490, also Ivan the Young), and from 1472 to Zoe Palaiologa (1448–1503; Greek Ζωή (Σοφία) Παλαιολόγου, Russian Софья Палеолог - Sofia Paleolog), who gave birth to his successor Vasily Ivanovich. Ivan the boy died in 1490 of a puzzling leg disease. According to an unverifiable theory, Sofia brought about death in order to pave the way for her son Vasily to the throne.

At the end of his reign, Ivan III was. torn about the question of succession. At first he wanted to make his grandson, Dmitri Ivanovich , son of Ivan the boy, his successor, and in 1498 even organized a coronation ceremony for him as the tsar. Sofia and Vasily, who were involved in a conspiracy against this development, fell from grace and were placed under house arrest. After a few years, Ivan III revised. however, his decision left Dmitri to be jailed and appointed Vasily as his successor. As Vasily III. he ruled after the death of Ivan III. For 28 years and continued its policy.