The title of this article is ambiguous. Further meanings are listed under Tver (disambiguation) .

Tver ( Russian Тверь ) is a Russian city ​​in the Central Federal District, located on the St. Petersburg – Moscow railway line .

Tver is located around 170 km northwest of Moscow at the confluence of the Tverza River into the Volga and is one of the oldest Russian cities. The city emerged in the 12th century as a trading and craft settlement.

Tver was first mentioned in writing in 1127, making the city at least 20 years older than Moscow. It was initially a settlement for merchants and craftsmen. Already in 1164 it received city rights. Tvers location directly on the Volga favored trade, but also led to ongoing battles between the principalities for control of the place. In the 13th century Tver went from the Novgorod Republic to the Principality of Vladimir-Suzdal in 1209 and became its western outpost until it was attacked and devastated by the troops of the Golden Horde under Batu Khan in 1238 during the Mongol invasion of the Rus , but without immediately then lose power. In 1247 the Principality of Tver was formed under Grand Duke Jaroslaw III. , and Tver became its capital until the principality was dissolved in 1485.

Until Moscow's rise to the center of the unified Russian Empire , the Principality of Tver was its bitterest and sometimes even superior rival in the struggle for the successor to the Grand Dukes of the Kievan Rus . In 1327 there was an armed uprising of the population against the Tatars in Tver, which was tributary to the Golden Horde, which was suppressed with the help of the Moscow troops and ushered in the political decline of the city. In the 14th and 15th centuries, Tver remained an important cultural and economic center in north-eastern Russia.

This state of affairs ended with the defeat of Tvers by Moscow in 1475. During the reign of the Moscow Grand Duke Ivan III. Tver renounced his claim to the Grand Duke in 1485 and was finally annexed to the Grand Duchy of Moscow. The oldest church building in Twers that has survived to this day, the Church of the White Trinity with its 27-meter-high bell tower, was built in 1564 from the time under Ivan IV .

With the establishment of Saint Petersburg , Tver experienced rapid development; new districts were built and in 1700 the first bridge over the Volga was built. The reason was the favorable location between the old and the new capital. In 1755, the city's first university was founded with the Theological Academy. This development experienced a setback in 1763 when large parts of Tvers fell victim to a major fire. As a result, Catherine the Great had a reconstruction plan drawn up for Tver, which gave the city a number of classicist buildings. Tver was an important trading center on the Upper Volga and became the center of the governorate of the same name with the territorial reform in Russia in 1775. Tver received its city arms in 1780. The city, which was rebuilt after the fire, now had a strictly geometric road network around the main traffic artery of the city, namely the route from Moscow to the new capital Saint Petersburg, which is still in place today.

The noticeable development of Tvers as a trading city continued in the 19th century and was additionally favored in 1851 by the route through the city of the St. Petersburg – Moscow railway line. In Tver, not only industrial plants were built, but also schools, hospitals, old people's homes and, in 1870, a university and a water pipe. At the beginning of the 20th century, Twers had over 100,000 inhabitants for the first time.

In 1931, Tver was renamed Kalinin after the Soviet politician Mikhail Kalinin . In 1940, in the village of Mednoye, 30 kilometers from the city, more than 6,200 Polish police officers and prisoners of war were murdered by the Soviet secret service NKVD as part of the Katyn massacre .

During the Second World War , the city was occupied by the German Wehrmacht on October 17, 1941 , but was recaptured on December 16, 1941 by troops of the Kalinin Front of the Red Army as part of the Kalinin Operation . Occupation and fighting caused the city considerable destruction and numerous civilian casualties. Later there were two POW camps in the city, 384 , Kalinin , and 395 , Kalinin , for German prisoners of war of the Second World War. The prisoner-of-war hospital 2501 in Torzhok was assigned to camp 384 . Camp 395 was later moved to the Kursk / Obojan area.

In memory of the war victims, a memorial was erected in Tver after the war. A striking post-war building in the city is the reception building of the Volga passenger port, the so-called river station, at the mouth of the Tverza into the Volga. 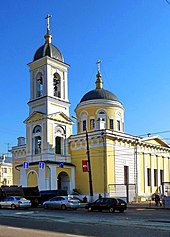 View over the Volga

Monument to Afanassi Nikitin in Tver

Since Tver fell victim to a fire in 1763, it was rebuilt by Catherine the Great. The reconstruction took place in the style of early classicism . Among other things, Katharina had hired the important classicist architects Carlo Rossi and Matwei Kazakow to Tver, whose buildings ultimately led her to judge that Tver was the most beautiful city in the Russian Empire after Saint Petersburg.

The early classicist city palace of Catherine the Great by Carlo Rossi and Matwei Kosakow, which now houses an art museum, has an outstanding position in the cityscape. The castle and the magnificent city center attract tourists every year.

The city has several theaters, a philharmonic hall , museums and architectural monuments such as the Ascension Cathedral or the Residence of the Nobility Assembly, the Assumption Cathedral (1722), the Church of the White Trinity from 1564, which Ivan the Terrible commissioned , and the city's art gallery . The entire city center is a classicist plan work of art by the most important Russian classicists.

Tver is one of the largest industrial and cultural centers in Russia. The most important branches of industry are the wood industry, textile, chemical and printing companies as well as the bioenergy sector . In September 2003 , President Vladimir Putin and Federal Chancellor Gerhard Schröder agreed to found a Russian-German joint venture for the production and use of biomass ( wood pellets , briquettes and rapeseed oil ) in decentralized systems and their export, which was implemented in Tver. The Kalinin nuclear power plant with four reactors is located in the Tver region ( Udomlya ) . The city is also the main location of the PPE Group outside of Moscow.

The main transport links between Moscow and Saint Petersburg run through Tver , including the Saint Petersburg – Moscow railway line , on which Tver has a long-distance train station. In addition to long-distance trains, local trains (so-called Elektritschkas ) also stop there from and to Moscow, Klin and Bologoje . The city is located on the Russian trunk road M 10 Rossija , which is part of the European route 105 . This connects Moscow with Saint Petersburg and continues to the border with Finland. The need for local public transport in the city is covered by bus and marshrutka lines as well as by its own tram network.

This partnership is manifested by constantly present city ambassadors from the respective twin city. They represent their city, look after visitors, support language problems with translation services and are integrated into the respective administration. The city partnership with Osnabrück not only helped the city of Tver to find a hotel with western standards, but also enabled several joint projects of the TACIS City Twinning Program of the European Union to support business start-ups in Tver as well as problems with urban waste management in Tver. The friendship between the cities of Twer and Osnabrück was established through numerous youth meetings organized by the Osnabrück City Youth Association from the early 1970s. Mutual visits take place among youth associations and schools.

The city is also a member of the New Hanseatic League of Cities .

The Wolga Tver football club is based in Tver . The HK Dynamo Tver ice hockey club plays in the second division, the Vysschaya Hockey League , while the THK Tver plays in the Pervaya League .