The title of this article is ambiguous. Further meanings are listed under Kursk (disambiguation) . 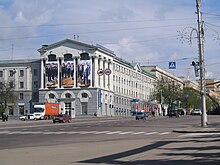 Lenin Street in the center of Kursk

Kursk ( Russian Курск ) is a city in the European part of Russia .

Kursk is the capital of the Kursk Oblast and is located around 500 km south of Moscow not far from the border with Ukraine . The city, through which the Seim flows, has 415,159 inhabitants (as of October 14, 2010).

West of the city is a meteorite crater with a diameter of 5.5 kilometers, see Kursk crater .

Kursk was founded around 980 as a fortress of the Kievan Rus and was first mentioned in a document in 1032, but excavations indicate a settlement at least since the 5th century BC. The city was a fortified trading center. In 1237 it was completely destroyed by the forces of the Golden Horde under the leadership of Batu Khan . After that the city was fought over by several small principalities. In 1285 it was again devastated and burned down by the Mongols under Nogai Khan . Kursk was temporarily occupied by the Grand Duchy of Lithuania in the 14th century and only recaptured by the Grand Duchy of Moscow in 1508 . Kursk was expanded into a fortress and was exposed to attacks by the Poles (1611/12) and Crimean Tatars until the 18th century .

In 1708 Kursk was added to the Kiev governorate . In 1727 Kursk was accepted into the newly formed Belgorod governorate . In 1779 Kursk received city status. In 1797 the new Kursk governorate was created. In the 1860s, Kursk became a hub in the newly created railway network, which led to a surge in industrialization. After the dissolution of the Kursk Governorate in 1928, the city initially belonged to the Central Black Earth Oblast . In 1934 the Kursk Oblast , which still exists today, was formed.

During the Second World War , Kursk was occupied by the Wehrmacht from November 4, 1941 to February 8, 1943 . Around 3,000 residents were shot during the occupation and around 10,000 were deported to the German Reich as forced laborers . Well known is the Battle of Kursk (also known as the Battle of the Kursk Arch ) in July and August 1943, the largest tank battle in the history of warfare.

In Kursk there was a POW camp 145 for German prisoners of war of the Second World War.

After the war the city was rebuilt and new industrial plants were built.

Today Kursk is an important administrative and industrial city. The iron processing, the chemical and the food industry are the most important branches of the economy. Agriculture is also important, as Kursk is located in the fertile black earth region.

The Kursk Magnetic Anomaly (KMA), the world's largest known iron ore basin with an average iron content of between 35 and 60%, is particularly well known .

In the Kursk Oblast of the city is close to Kurchatov the Kursk Nuclear Power Plant . Four graphite-moderated reactors of the type RBMK -1000 are operated there, these are reactors that were also used in the Chernobyl nuclear power plant . The reactors went into operation between 1977 and 1986.

Kursk is connected to the Russian capital Moscow via the M2 Krym highway . At the same time, the city is the starting point of the junction R298 , which leads east via Voronezh to Borisoglebsk .

In football, the city is represented by the club Awangard Kursk . The city was one of the venues for the 1965 World Bandy Championships .