The Kursk ( Russian Курская область / Kurskaya oblast ) is an oblast in the southwestern Russia . It borders on Ukraine ( Sumy Oblast ) and is conveniently located on the connection between Moscow and the densely populated, industrial areas of eastern Ukraine.

The area lies on the western edge of the Central Russian Plate with heights of 150 to about 300 m and an area of ​​250 × 150 km. Most of it is drained from the Seim and Swapa to the west to the Dnepr , and from the Psel and Oskol rivers to the south and east . The capital Kursk is roughly in the center of the oblast.

Iron ore mining is economically important . The Kursk Basin contains the largest known iron ore deposit and, with the Kursk Magnetic Anomaly, causes the world's strongest anomaly of the Earth's magnetic field. Other important mineral resources are gold , uranium and platinum . In addition to iron processing, important industries are the chemical and food industries. The soil consists of fertile black earth and is heavily used for agriculture.

Kursk Oblast is divided into 28 Rajons and 5 urban districts. The largest cities besides the administrative center of Kursk are the mining town of Schelesnogorsk as well as Kurchatow and Lgow . There are a total of 10 cities and 22 urban-type settlements in the oblast .

Although the number of residents is constantly falling, the proportion of the urban population increases from census to census. The following table illustrates this: 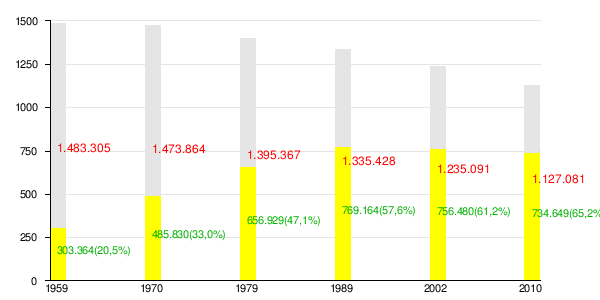 Note: the proportions refer to the total number of inhabitants. Including the group of people who did not provide any information about their ethnic affiliation (2002 2,615 and 2010 52,722 people)

The area's population is more than 90% Russian. The Ukrainians are the only significant ethnic minority in Kursk Oblast. Their number - like the number of Belarusians and Jews - is falling sharply, however. In contrast, numerous people have immigrated from the Transcaucasus, Anatolia and Central Asia since the end of the Soviet Union.